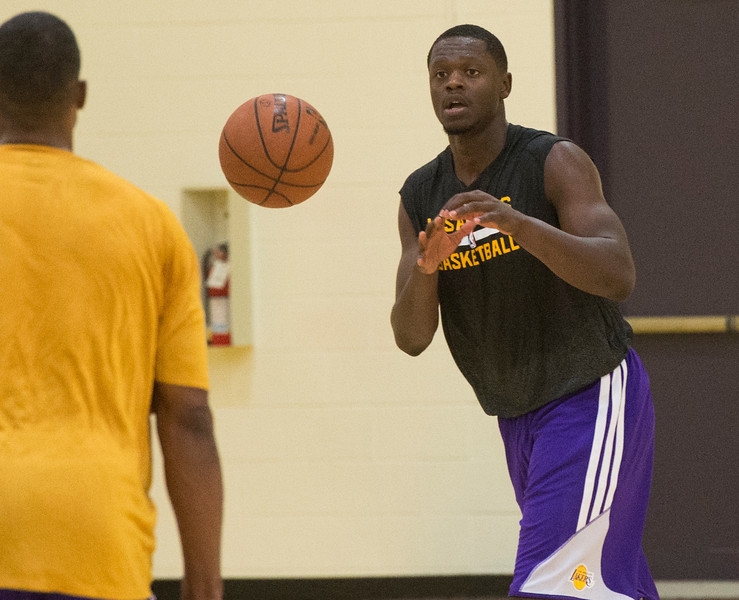 His strength remained so forceful that Metta World Peace once gave James Harden a concussion on one swing with his elbow. His toughness seemed so fierce it took only 13 seconds before World Peace tumbled to the floor with Paul Pierce for a loose ball. His anger became so out of control that the former Ron Artest once punched a fan in the stands after he a threw a drink at him.

But after working out this summer on his own at the Lakers’ practice facility, World Peace apparently found an opponent that could match and withstand his own power.

His name is Julius Randle. He has not played in an NBA game since logging only 14 minutes in the Lakers’ season opener last year before fracturing his right tibia. And Randle has impressed the Lakers with a slimmed down figure, an emerging jump shot and a beefed up frame.

Yes he is. World Peace used his strength very well in his 17-year career that included helping the Lakers to an NBA championship in 2010 in his four seasons here (2009-2013). Yet, that did not stop Randle from showing off how strong he is.

“They were bumping and grinding,” Scott said, smiling. “It was kind of fun to watch. Metta is the old wily vet and you have this young bull. Every now and then, Metta got the best of him. Btu when he hit Metta, Metta bounced off of him.”

That caused Scott to say, “Woah,” in amazement. The episode represented a string of developments that left the Lakers encouraged about Randle.

Randle reported losing about 18 pounds within the last year after following the Lakers’ grass-food diet initiative, so much that Scott observed that “his baby fat is gone.” Once the Lakers cleared him for shooting drills in early spring, Randle spent that time sharpening his mid-range jump shot. He studied endless NBA games from the sideline and on television before producing frequent scouting reports for Lakers general manager Mitch Kupchak.

“He’s taking the game a lot more serious by learning and just watching,” Scott said. “That can be very valuable at times as well. But now it’s about taking that next step for him, which is getting out there on the floor and doing it.”

That still comes with limitations.

Though Randle will play in the Lakers’ summer league debut against Minnesota on Friday in Las Vegas, he will sit out Saturday’s game against Philadelphia for precautionary reasons. Scott also said that Lakers assistant coach Mark Madsen won’t play Randle more than 30 minutes per game in Summer League.

Although the Lakers have gushed about Randle’s versatility, Scott quickly shot down any notion that he could suddenly become a lethal outside shooter.

“I wouldn’t say stretch four at all,” Scott said. “We’re going to make sure we keep that limited. His range right now is 17 to 18 feet. We’re going to keep working on that so he can perfect that as much as possible. I think next year we’ll start venturing out a little bit more.”

But what about right now?

“Right now he’s a playmaker,” Scott said of Randle. “He’s a guy who can bring the ball up. I told him every rebound he gets, he should push it. He has an ability to make plays for himself and his teammates. Other than that, we’ll try to give him the ball in that 17 or 18-foot area and let him work.”

The Lakers will also try to make sure Randle imposes his physical will against anyone who stands in his way. After all, World Peace experienced that the hard way after inflicting so much pain against countless opponents.

“Physically he looks good,” Scott said of Randle. “I think he is ready mentally.”