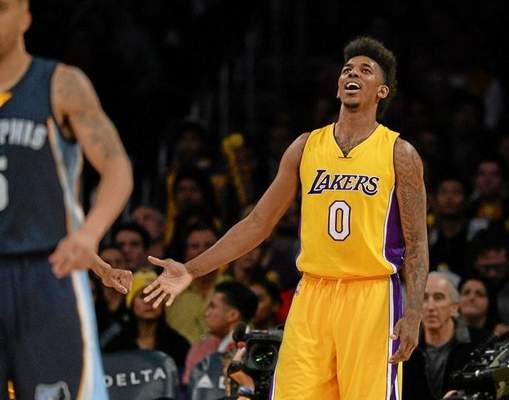 It is not entirely clear what Young and Kupchak addressed in their meeting. It is typical for Kupchak to meet with players to discuss both professional and private issues. But the conversation at least left Young feeling comfortable enough that he will enter the 2015-16 season on the Lakers’ roster, according to a source familiar with his thinking.

The Lakers had hoped to trade Young this offseason after averaging 13.4 points on a career-low 36.6 percent shooting. He has three years left on his contract worth $15.6 million and frequently clashed with coach Byron Scott. The issues ranged from Scott’s demanding coaching style, Young’s inconsistency and playful post-game interviews. But the Lakers failed to find much interest in Young on the open market.

Even after the Lakers signed shooting guard Lou Williams to a three-year, $21 million deal, Kupchak maintained he viewed Young as a significant part of the rotation. It is possible Young will come off the bench at small forward, while Williams will play as a reserve shooting guard.

“That’s going to be up to Nick,” Kupchak said in a conference call with reporters on July 9. “He has to convince our coaching staff he can play within the system. That doesn’t only mean score the ball. That means defending and doing the little things, which I know he can do. The answer is yes. I do see him being a core player this year.”

Young naturally has attracted plenty of attention on his off-court exploits, including his recent engagement to hip hop artist Iggy Azalea and attending New York Fashion Week. But once his swollen left knee healed in early May, Young reported training privately near the Valley, telling Los Angeles News Group he has listened to Scott’s advice on spending his offseason to improve his decision making, playing off-the-ball and off-ball defense. Young has also appeared in a pair of Drew League games this summer.

Still, it remains to be seen to what degree how the partnership between Scott and Young will evolve, for better or for worse.