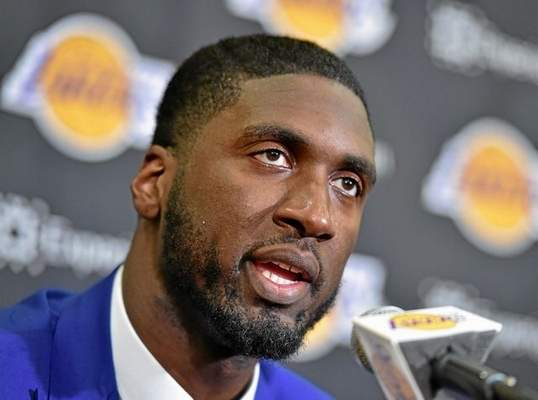 It seems a stretch to say that Hibbert will suddenly unleash Abdul-Jabbar’s skyhook. Hibbert has averaged 11.1 points through seven NBA seasons in Indiana. Hibbert also stressed he will focus on defense so that he could become a three-time All-Star and bolster a Lakers unit that ranked 29th out of 30 NBA teams in that category.

Yet, Hibbert credited Abdul-Jabbar for teaching him various techniques regarding his spacing, defensive presence, mental preparation and off-court issues. Hibbert also revealed he also grew up idolizing Shaquille O’Neal, who won three of his four NBA championships with the Lakers. The Lakers may have failed to acquire an elite big man, such as Lamarcus Aldridge, Greg Monroe or DeAndre Jordan this summer. But they acquired a center that sounded determined in following the path of the Lakers’ great centers, which have also included George Mikan and Wilt Chamberlain.

“I’m really happy that I was able to land with a team,” Hibbert said, “that has such a tradition of big guys and have a winning tradition as well.”

Will Hibbert continue to lean on Abdul-Jabbar’s advice now that he wears a Lakers uniform? Perhaps, but it seems unlikely in an official capacity.

Abdul-Jabbar worked as a Lakers special assistant coach for former center Andrew Bynum from 2005 to 2009. But Abdul-Jabbar has since said his coaching duties were significantly scaled back in the 2008-09 season after Bynum told the Lakers he no longer had any interest in walking with Abdul-Jabbar. He has since channeled his focus on writing books. And although he has since fully recovered, Abdul-Jabbar had quadruple coronary bypass surgery in mid-April. Meanwhile, Lakers assistant Mark Madsen has often worked with the team’s post players after playing as a key reserve during the team’s championship runs in 2001 and 2002.

“Roy is pretty open to taking advice from anybody right now,” Lakers general manager Mitch Kupchak said. “Whether or not we bring in a big man’s coach, he’s 28 and he knows what he needs to do. Primarily that would be focused on the defensive end. But that’s something we’ll look at.”