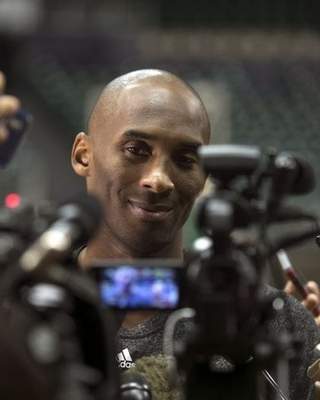 Kobe Bryant on talking to his young Lakers teammates: “There’s a generational gap, but the universal language is the game. These guys are thirsty for knowledge.” MARCO GARCIA — THE ASSOCIATED PRESS

HONOLULU — It took only 13 seconds into his second NBA game since injuring his right shoulder nine months ago. Bryant cut up to the right elbow. He caught a pass. He quickly released a shot.

Less than two minutes later, the sound became audible again. Bryant marched up the court on a fast break. He received another pass. Bryant squared from behind the perimeter. He launched another shot.

The night may have ended with a Lakers’ 117-114 overtime loss to the Utah Jazz on Tuesday at Stan Sheriff Center. But it also ended with Bryant played efficiently all over with 13 points on 5-of-9 shooting, three assists, two turnovers and one steal in 20 minutes. In other words, it marked a much better showing than when Bryant scored five points on a 1-of-5 clip in 12 minutes in the Lakers’ preseason opening loss on Sunday to Utah.

“I’m past the recovery phase,” Bryant said. “It’s about getting my timing down. I feel like I’m myself.”

Bryant showed that in various ways.

“I don’t know if it’s a rebirth or what,” Lakers coach Byron Scott said with a smile. “But he looked very good.”

So good that Scott credited Bryant for becoming “very lively” on defense, where he and Metta World Peace continuously scrapped for loose balls.

“Defensively, I thought he was fantastic,” Scott said of Bryant. “It’s amazing that our two oldest guys set the tone on our end of the floor and we started to pick it up.”

That coincided with Scott ramping up Bryant’s workload so he can shed off the rust stemmed from his rehab. Scott reported that he came up with a minute restriction lower than Bryant’s, but that the Lakers’ star gladly deferred to his decision-making. With Scott’s initial pledge not to play any starter over 20 minutes in an exhibition, it appears likely Bryant’s workload will stay the same in Thursday’s preseason game against Toronto on Thursday.

“It’s a step in the right direction,” Bryant said. “I train really hard and feel really strong. My conditioning is great. I feel fine. The timing is not perfect yet. But it’ll get there pretty quickly.”

Perhaps as quickly as it took for Bryant to swish his first shot.