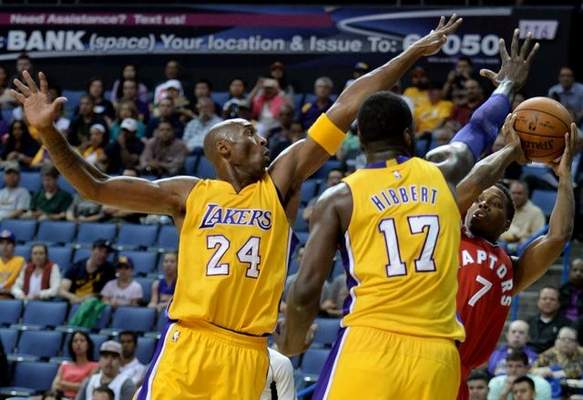 ONTARIO — Something annoyed Kobe Bryant, and no he did not fret that much about the Lakers’ 105-97 preseason loss to the Toronto Raptors on Thursday at Citizens Business Bank Arena.

It involved something else that has emerged around this time of year for three consecutive seasons. ESPN released its pre-season player rankings that pitted Bryant as the league’s 93rd best player.

“Please don’t ask me about silly stuff like that,” Bryant said.

Still, Bryant expressed amusement over several of the 8,123 Lakers fans in attendance who had criticized ESPN’s player evaluations. A few chanted out to Bryant during the game, “You ain’t no 93!”

“I heard a couple of those,” Bryant said, smiling. “I don’t need to defend that. Nobody does.”

Instead, Bryant allowed his play to speak for itself, his 16 points coming on 5-of-11 shooting, three rebounds, three assists, two steals and two turnovers in 22 minutes. Bryant may have shuffled over from small forward to shooting guard as Jordan Clarkson played at point guard spot while D’Angelo Russell sat out with a bruised glute. But Bryant’s role appeared the same. He mostly worked off the ball and took an equal interest in both scoring and setting teammates up.

So much that Scott will likely increase his minutes “a little bit higher.” Yet that scenario still seems unpredictable considering the Lakers’ hopes to keep Bryant’s workload conservative after lasting only 35 games last season because of a torn rotator cuff in his right shoulder that required surgery. As of now, Bryant said he and Scott have aimed for him to play in six minutes each quarter before sitting out the final period.

“We’re comfortable with these three quarters right now,” Bryant said. “As we get to a couple games left in the preseason, we might increase it.”

Metta World Peace: “Kobe is the main reason why I’ve worked so hard”