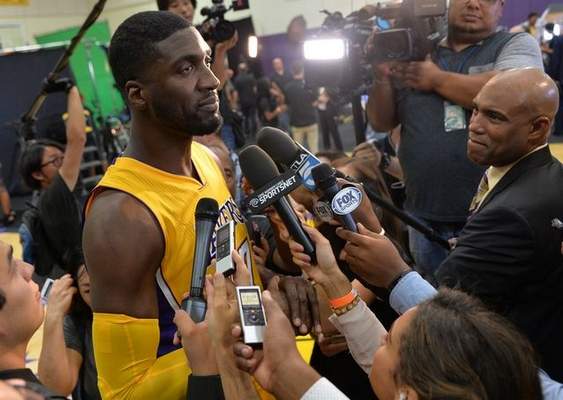 The activity in the Lakers’ trainer’s room has become pretty fluid. But they believe it will soon subside.

Lakers center Roy Hibbert experienced soreness in his right knee during Monday’s practice. But Hibbert declined to have an MRI or x-rays taken and is considered probable to play in Tuesday’s game against the Sacramento Kings in Las Vegas.

“He says he feels fine and there’s a little swelling in there,” Lakers coach Byron Scott said. “We’ll see how he feels tomorrow.”

The Lakers have already ruled out Marcelo Huertas out against the Kings, marking the fifth consecutive game he will miss because of a strained right hamstring. The Lakers plan for Huertas to practice fully beginning on Wednesday in hopes to play in Saturday’s game against Golden State in San Diego.

Despite practicing on Monday, Lakers forward Brandon Bass is expected to miss his third consecutive exhibition on Tuesday against because of a bruised left knee.

Lakers guard Kobe Bryant also sat out of Monday’s practice albeit strictly for rest purposes. The 37-year-old guard has averaged 13.75 points on 48.5 percent shooting and 1.75 assists in 18.25 minutes per contest.

“He’s ahead of schedule,” Scott said of Bryant. “He looks fantastic. He’s so fluid in his movements right now and shooting the ball extremely well.”

D’Angelo Russell: “If you’re open, I’m going to get it to you”