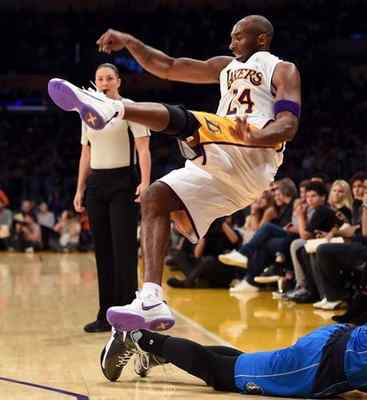 Kobe Bryant slowly emerged out of the players’ lounge. Nearly 45 minutes had already passed since the Lakers fell, 103-93, to the Dallas Mavericks on Sunday at Staples Center in what marked a three-game losing streak. Yet, Bryant remained in his element.

He still wore a towel around his waist so he could plant his feet in a bucket full of ice water by his locker. Once Bryant sat down, he offered a stoic expression on his face. And then once Bryant faced various questions about his 15-point performance on 3-of-15 shooting and 2-of-8 from 3-point range in 31 minutes, the Lakers’ 37-year-old star hardly minced words.

Bryant occasionally took digs at himself by indirectly referencing ESPN ranking him 93rd overall entering the 2015-16 season. But he usually laced his remarks with blatant sarcasm. This time, Bryant sounded totally serious after playing three games where he has averaged 17.33 points on a 31.3 percent clip and a 20.68 percent mark from 3-point range.

It appears Bryant shared that self-critical attitude in the locker room with the team.

“I know he’s not happy with it. We talked a little bit,” Lakers coach Byron Scott said. “He’s disappointed in the way he’s shooting the ball.”

Yet, Scott sounded more forgiving than Bryant. Scott brought up that Bryant is “trying to get that feel back again” after he missed the Lakers’ final three exhibition games because of a bruise in his left calf. Scott argued that opponents “still have to respect him out there no matter what” considering Bryant often attracts double teams. And Scott praised Bryant’s intentions.

“He’s playing hard,” Scott said. “He’s competing like he always does. I think it’s a matter of time.”

Meanwhile, Bryant continued to hurl insults at himself.

Bryant refused to describe external elements with the same criticism.

He downplayed his recent injury.

“I was in a good rhythm,” Bryant said. “It’s a matter of trying to get it back next game.”

Lakers rookie point guard D’Angelo Russell has largely struggled, posting 10 points on 4-of-13 shooting and one assist in 27 minutes. Russell also looked uncomfortable first as an off-ball shooter and then the Lakers’ primary playmaker. Yet, Bryant refused to cast blame on him.

“D’Angelo is putting me in the right spots,” Bryant said. “I just have to capitalize.”

Bryant also has taken 29 of his 51 total shots through three games from 3-point range. Scott also has said ideally he wants Bryant to operate in the post and the elbows. Yet, Bryant argued he has simply reacted to defensive coverages.

“I’m getting the shots I want,” Bryant said. “I just have to make them.”

Underneath Bryant’s self-criticisms, however, some of his issues seem self-inflicted. On one possession, Bryant spent eight seconds operating in an isolation play only for his defender to strip the ball away from him out of bounds. Most of Bryant’s shots fell short, suggesting he may have trouble getting the proper lift on his shot. And two days after arguing he would allow his young teammates room to grow from their mistakes, Bryant scoffed at the idea on scaling back his shots.

“The guys are giving me the ball,” Bryant said. “They’re making great passes. It’s their job to facilitate and it’s my job to finish. I got to do the responsible thing and make them.”

To get to that point, Scott plans to manage Bryant’s practice regimen “very carefully.” Bryant has sat out for most of morning shootarounds and has missed the team’s light practice sessions on Saturday in favor of treatment. After a two-week stretch where he did not complete any running drills, Bryant completed most of the practices before skipping the portion of the scrimmages that became open to the media. Perhaps more restrictions will emerge.

But for now, Bryant has only become repetitive about two things. He has kept shooting. He has also kept missing.

“At some point, you have to say ‘To hell with all that’ and just have to figure out how to put the ball in the hole,” Bryant said. “But I’ve been here before. As time goes on most people tend to forget about that. But I’ve done that before.”