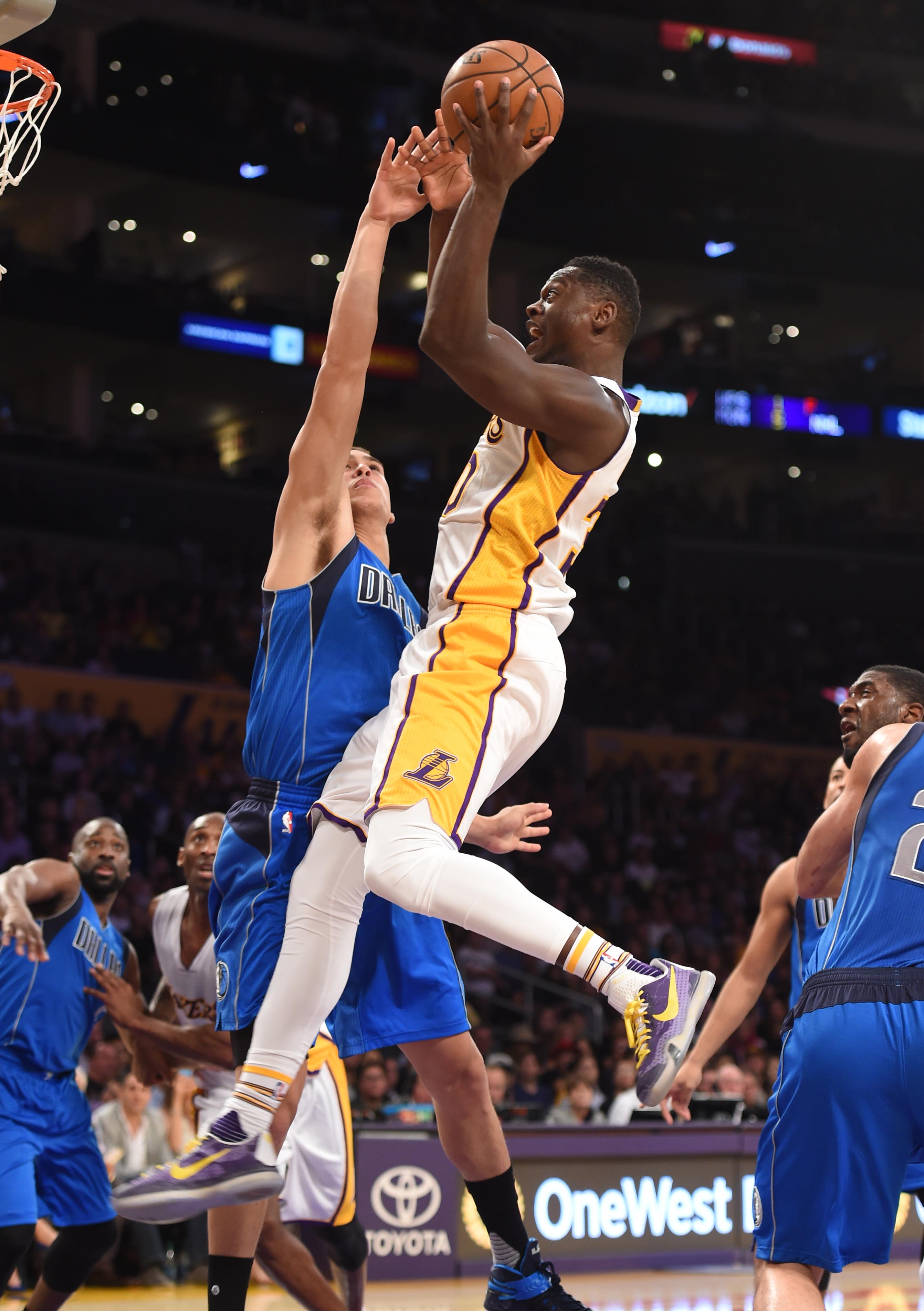 As quickly as the ball tipped up in the air to start the game, Lakers forward Julius Randle stormed up and down the court. He dominated with his brute size. He showed off his versatile playmaking. He demonstrated his athleticism.

But Randle offered as stern a look afterwards as when he matches up against his opponents.

The 18,997 at Staples Center chanted his name, hoping Randle would come back into the game early in the fourth quarter to show off more dominance. Lakers coach Byron Scott eventually obliged. The fans greeted Randle loudly once he returned.

Randle posted 22 points on 9-of-17 shooting and 15 rebounds in Sunday’s game against Dallas at Staples Center. It marked a huge improvement two days ago in Sacramento where he finished with more fouls (five) and turnovers (five) than points (three) and rebounds (two). But Randle sounded just as upset afterwards because he paid attention to another number. The Lakers’ 103-93 defeat to the Mavericks marked the team’s third consecutive loss to open the 2015-16 season, something they also experienced last year en route to their worst record in franchise history.

“I wasn’t happy because we lost. Regardless of how I play, I want to win,” Randle said. “I played better. But it’s a team sport. We’re trying to win. I know I can bounce back. But it’s not about that. I just want to win.”

That will likely sound nice to the Lakers, who had already raved about Randle’s mindset in immediately rectifying a poor game.

“His attitude and competitiveness, it’s great,” Lakers guard Kobe Bryant said. “He’s attacking and the sky’s the limit for him. He’s a gem.”

But Randle’s self-criticism did not just entail sulking over a team loss. He also pointed the finger at himself for the Lakers’ woes that include an 0-3 record.

Randle pointed the finger at himself for the Lakers trailing 0-15 just over four minutes into the game.

“We just didn’t get going. I can communicate better to our guards,” Randle said. “It’ll come with watching film and knowing when things will happen before they happen.”

Or why Dallas scored 40 points inside.

“It’s my job to control the paint,” Randle said. “I have to get better.”

Or why Dallas forward Dirk Nowitzki posted 25 points on a 10-of-13 clip. All of this hapepened despite Randle knowing Nowitzki would attempt endless mid-range jumpers after studying him while growing up near Dallas.

“A dude like that,” Randle said, “you can’t give him open looks.”

The Lakers sounded more forgiving. Scott argued that Randle at least “took on the challenge” in guarding Nowitzki. Scott described Randle as “really good as far as being in attack mode.” Bryant predicted that Randle will have a strong jumper and right hand within a year from now because of his work ethic.

“He’s one of those players that will stay in the game and work on those things,” Bryant said. “That’ll develop him. Then his game is really going to go through the roof.”

Yet, that mindset explains why Randle did not feel like he went through the roof against Dallas even if his athleticism, power and versatility made it appear he did.

He still sounded upset about his disappearing act in Sacramento.

“I was too timid,” Randle said. “I was in a bad rhythm. I just was not aggressive at all”

Randle’s agitation increased when he focused on his latest effort.

“We know Kobe will come out aggressive. But in a sense it starts with me as far as bringing that aggression,” Randle said. “I did that offensively. But I have to make sure I do that on the defensive end.”

And then soon enough, Randle’s interview ended on a note that explains what makes him tick.

“I’m worried about the game,” Randle said, before exiting the locker room and soon plotting a plan to fix that.