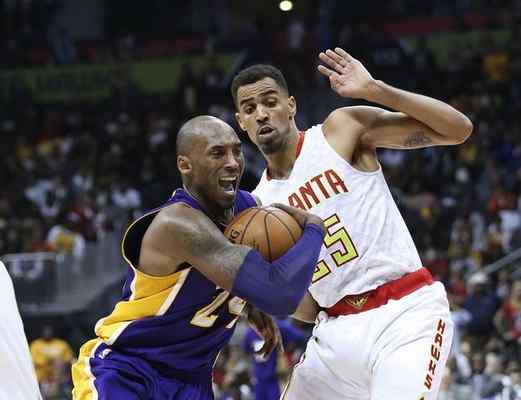 ATLANTA — In less than 24 hours, Kobe Bryant will start feeling something unpleasant that does not involve his health. When the Lakers (3-16) play the Detroit Pistons (11-9) on Sunday at the Palace of Auburn Hills, Bryant will feel frustration regarding the Lakers losing to the Pistons in five games of the 2004 NBA Finals.

“It still eats at me. Absolutely does,” Bryant said. “I’m upset that I gave Richard Hamilton something to brag about. Up until that point, he never beat me. That just kills me.”

So much that Bryant has contended that he should have won seven NBA championships in five, considering the Lakers lost both to Detroit in the 2004 NBA Finals and to Boston in the 2008 NBA Finals. Nonetheless, Bryant insisted that he will walk away from his 20-year NBA career fully satisfied with five NBA championships.

“Listen, I worked as hard as I [expletive] could,” Bryant said following Saturday’s practice at Georgia Tech University. “I did everything I could. I’m fine with that.”

But what about Bryant not having the chance to tie or surpass Michael Jordan’s six NBA championships? Or the chance to come close toward matching Bill Russell’s 11 NBA rings?

“When I came into the league, I knew I didn’t want to have any regrets,” Bryant said. “I pushed as hard as I can. I’ve done that. So I’m completely fine with that.”

Lakers coach Byron Scott understands the feeling all too well. He won three NBA championships with the Showtime Lakers, including two victories over the Celtics in 1985 and 1987 against Detroit). But Scott has argued he should have won five NBA titles. He believes Kevin McHale’s clothesline on Kurt Rambis in Game 4 of the 1984 NBA Finals negatively affected the series. Scott also missed the Lakers’ 1989 NBA Finals four-game sweep to Detroit after strained his left hamstring.

Hence, the Lakers’ regular-season game against Detroit will spark negative thoughts about a much more important contest.

“Every time I step into that building, I see some jerseys that I played against and a couple of banners up there that were won at our expense,” Scott said. “It conjures up memories.”

Still, both Bryant and Scott hold the Pistons teams in high respect.

Scott shot down the popular notion that the Bad-Boy Pistons played dirty.

“I just thought they were real physical,” Scott said. “[Bill] Laimbeer was dirty. But other than that, everybody else were physical basketball players.”

Bryant shot down the popular contention that the Lakers would have beaten Detroit if not for Karl Malone’s series-ending knee injury.

“They were a better team than us anyway,” Bryant said. “They executed extremely well. They pressured us and we weren’t ready to go into our offense and automatics. That is stuff that wins us championships.”

So does physical play, an area which Bryant argued the Celtics excelled at better than the Lakers to secure the 2008 NBA title.

But even with those miscues vivid in his mind, the normally competitive Bryant has apparently softened his edge, showing more pride about what he accomplished than lamenting what he had not.

“He knows in his heart he’s given everything that he’s had at this point,” Scott said. “He hasn’t held back one bit on the court. When you feel that way and know you’ve given everything you’ve got, you can be [at peace].”

Kobe Bryant struggles, but he’s not alone in Lakers’ loss

Kobe Bryant: Retirement plans ‘just slipped out’ during a game