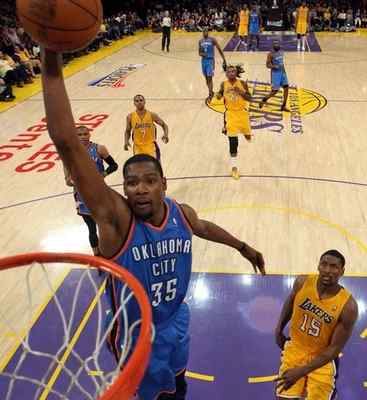 “That’s a dream. That’s a type of career you wan to have when you first come into this league,” Durant said. “When you win a title, it makes it easier to ride it out.”

Bryant won five NBA titles and climbed to third place on the NBA’s all-time scoring list partly because of his ability to overcome injuries. But he became saddled in the past three years with season-ending ailments to his left Achilles tendon (April 2013), left knee (Dec. 2013) and right shoulder (Jan. 2015). But Durant took value out of Bryant’s experiences and applied to his season-ending injury last season to his right foot.

“The mental aspect of the game, he developed. He’s had it, but it went to another level when you get injured. You can’t do anything but think,” Durant said. “You can’t move. You can’t play ball. You can’t do anything you want to do. So I heard him say that one time in the media and tried to think about that and stay conscious on how I can mentally be better and get my mind in the right spot every single day.”

What did that do?

“It was a gift and a curse,” Durant said. “It was tough to go through. But I learned a lot about myself throughout the process.”

Durant also learned a lot about Bryant, his willingness to give advice about basketball shedding the poor reputation he initially cast as a ballhog and unsupportive teammate.

“That’s one thing I love about him; he doesn’t give a [bleep] about what people think or how hes viewed,” Durant said. “He goes out there and works his tail off every single day. I can learn from that and respect that. I’ve always liked that about him and guys that are similar to him that just don’t care. That’s the approach I try to take.”

Lakers’ Kobe Bryant to sit out vs. Oklahoma City with sore right shoulder