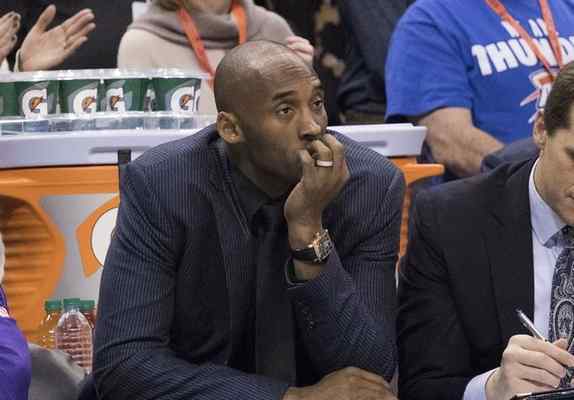 DENVER — Lakers guard Kobe Bryant traveled from Denver to Los Angeles on Sunday morning after sitting out in Saturday’s loss against Oklahoma City because of soreness in his right shoulder, according to multiple sources familiar with the situation.

Although Bryant is receiving treatment in hopes to play in Tuesday’s game against the Denver Nuggets at Pepsi Center, sources say Bryant does not plan to see a doctor in Los Angeles. Bryant mainly returned to Los Angeles to spend time with his family, sources said.

Bryant plans to travel back to Denver sometime on Monday. The Lakers (4-23) currently list Bryant’s status as probable to play on Tuesday against the Nuggets (11-15).

“He’s okay,” Lakers coach Byron Scott said following Saturday’s practice at the University of Denver. “No improvement. But no worse than the initial prognosis that it’s soreness.”

Bryant said on Saturday that he felt soreness in his right shoulder during the past few games. But he acknowledged the pain worsened after throwing down a right-handed dunk in Thursday’s game against Houston. Bryant also had season-ending surgery on his right shoulder in late January to repair a rotator cuff that was torn after dunking against New Orleans.

“When the adrenaline is flowing, it’s real hard to tell a guy ‘Don’t dunk,'” Scott said, laughing. “That might have been his last one. But he knows himself more than anybody. But me personally, I don’t want him to dunk no more. I’ll tell him to save it for Game 82. Then he can dunk again.”

Bryant has averaged 16.7 points on 33.9 percent shooting and 3.4 assists. But he has shown more efficiency recently, averaging 20.3 points on 50.8 percent shooting, 6.0 rebounds and 4.8 assists in the past five contests.