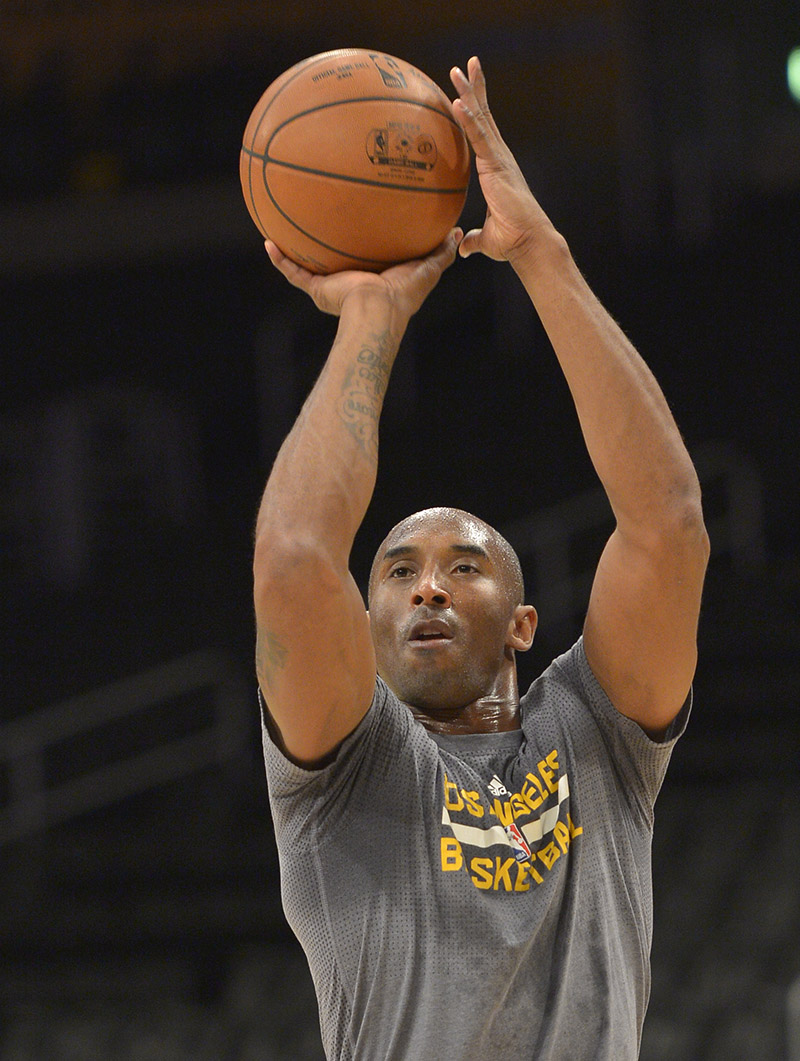 OKLAHOMA CITY — The farewell tour will come to a screeching halt. The Lakers can only hope temporarily.

Kobe Bryant will sit out when the Lakers (4-22) visit the Oklahoma City Thunder (17-9) on Saturday at Chesapeake Energy Arena because of emerging soreness in his right shoulder. The Lakers currently do not have answers on the severity of his injury or how it happened. Lakers coach Byron Scott only reported that Bryant woke up on Saturday morning feeling soreness.

But the development raised alarms for a few reasons. Bryant had torn the rotator cuff in his right shoulder in late January in New Orleans before needing season-ending surgery. Bryant also threw down a one-handed dunk with his right hand in Thursday’s game against Houston.

“You could definitely look at that as something could have happened. But I don’t want to assume anything at this particular point,” Lakers coach Byron Scott said before the game. “Anybody that saw the dunk and then a couple of days later is a little sore, you can put those two together. Btu I want to wait until I see what the doctor says.”
END_OF_DOCUMENT_TOKEN_TO_BE_REPLACED

A blank expression formed on Julius Randle’s face as he sat on the bench. He was well on his way toward another double-double performance. He had exuded his dependable strengths with his overwhelming power. He had shown glimpses of his potential with his first NBA career 3-pointer and a left hook shot.

But there Randle sat on the bench with 6:01 remaining of the Lakers’ eventual 107-87 loss to the Houston Rockets on Tuesday at Staples Center. He looked dejected as he stared straight ahead as he sat alone on the bench during a timeout. He would finish with 18 points on 6 of 15 shooting and 10 rebounds in 23 minutes. But one can only wonder how much more Randle would produce had he played longer.

“I don’t make decisions with playing time,” said Randle, who only played the final 3:46 because center Roy Hibbert fouled out. “The thing that I always tell you guys is I control what I can and I go out there and play hard. I let our coaches decide who’s in and who’s not.”

END_OF_DOCUMENT_TOKEN_TO_BE_REPLACED

The man performed a pump fake as he had done millions and millions of times. But then Lakers guard Kobe Bryant soon performed something he has not done in over nine months, even in practice.

Bryant drove right into the teeth in the Rockets’ defense, leaving the Lakers’ 37-year-old star to reference the Casey Jr. train from the Disney movie, “Dumbo.”

“‘I think I can. I think I can,'” Bryant said, quoting the line from the circus train as it went up a long hill.

Then Bryant soon found out he can.

“When I was up there, I thought about my shoulder a little bit,” Bryant said. “But I said: `Dude, how many times am I going to jump when my legs actually feel fine? So I might as well just give it a shot.'”

So, Bryant did. He stayed in the air and threw down a one-handed dunk over Houston forward Clint Capela, providing a memorable highlight early in the third quarter of an otherwise forgettable Lakers’ 107-87 loss to the Rockets on Thursday at Staples Center. It also captured Bryant’s 22-point performance on 9-of-16 shooting, eight rebounds and three assists in 32 minutes.

END_OF_DOCUMENT_TOKEN_TO_BE_REPLACED

Houston Rockets center Dwight Howard on Wednesday told the Houston Chronicle that the rumor going around that he is unhappy at Houston and that he expects to be traded to Miami is completely false.

“I haven’t said anything to anybody about anything,” said Howard, whose Rockets took on the Lakers on Thursday at Staples Center. “People make up lies and rumors.”

Rockets interim coach J.B. Bickerstaff was asked before Thursday’s game if Howard is disgruntled. Bickerstaff did not take long to reply.

“I don’t think he’s disgruntled,” Bickerstaff said. “I haven’t had any problems. Everything we’ve asked him to do, he’s done. He’s worked his tail off, he’s shown up to work with a smile on his face every day, so I wouldn’t say that he’s disgruntled.” 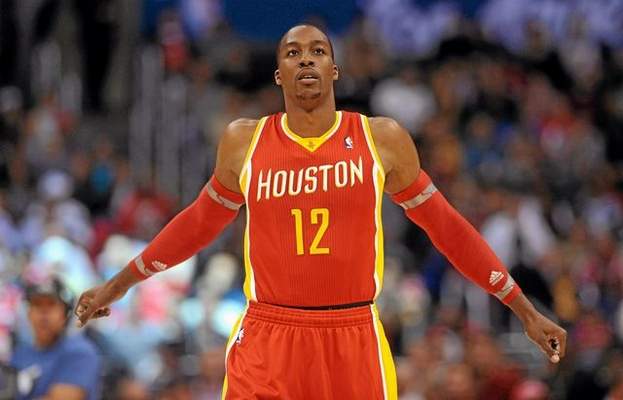 “No,” Howard said. “It’s either going to be a hard foul or a block.”
END_OF_DOCUMENT_TOKEN_TO_BE_REPLACED

For once, a man walked into Staples Center understanding just as much as Kobe Bryant about the toll that NBA miles can put on a body.

Milwaukee Bucks coach Jason Kidd currently ranks fourth in the NBA in minutes played (50,111) through a 19-year NBA career. Following the Lakers’ 113-95 win over the Milwaukee Bucks on Tuesday at Staples Center, Bryant has logged 47,450 minutes, ninth in the NBA.

“I think we can probably take one of Kobe’s quotes, I hope I get it right, because I felt the same way, it’s that, ‘You’re worried about getting into the car,'” Kidd said before the game. “People can laugh at that or take that lightly, but when you put that type of time on your body, it starts to take time to walk to the car or walk to the bathroom — you take those things for granted.”
END_OF_DOCUMENT_TOKEN_TO_BE_REPLACED

The play defied gravity. Lakers rookie forward Larry Nance Jr. leaped into the air, but it seemed like only a matter of seconds before he would land on the ground. But Nance Jr. still kept hanging in the balance before he used his 6’9″, 230-pound frame and threw a one-handed dunk over Milwaukee center John Henson.

After the Lakers’ 113-95 victory over the Milwaukee Bucks on Tuesday at Staples Center, Kobe Bryant called the play “impressive” before encouraging reporters to ask Nance Jr. what he said to him following the ensuing timeout.

“He looked to me and said, ‘When you do that on Dwight Howard, you can come talk to me,'” Nance Jr. said following Wednesday’s practice at the Lakers’ facility in El Segundo. “I said, ‘Hands up, white flag, you win. I got to get somebody better before I come talk to you.'”

Conveniently, the Lakers (4-21) host the Houston Rockets (12-14) on Thursday at Staples Center. What better way for Nance Jr. to get in the Lakers’ good graces than to posterize Howard as the fans at Staples Center inevitably boo him?

“I don’t know about that,” Nance Jr. said, laughing. “But I think he was just alluding to that vicious dunk on him earlier in his career.”

END_OF_DOCUMENT_TOKEN_TO_BE_REPLACED 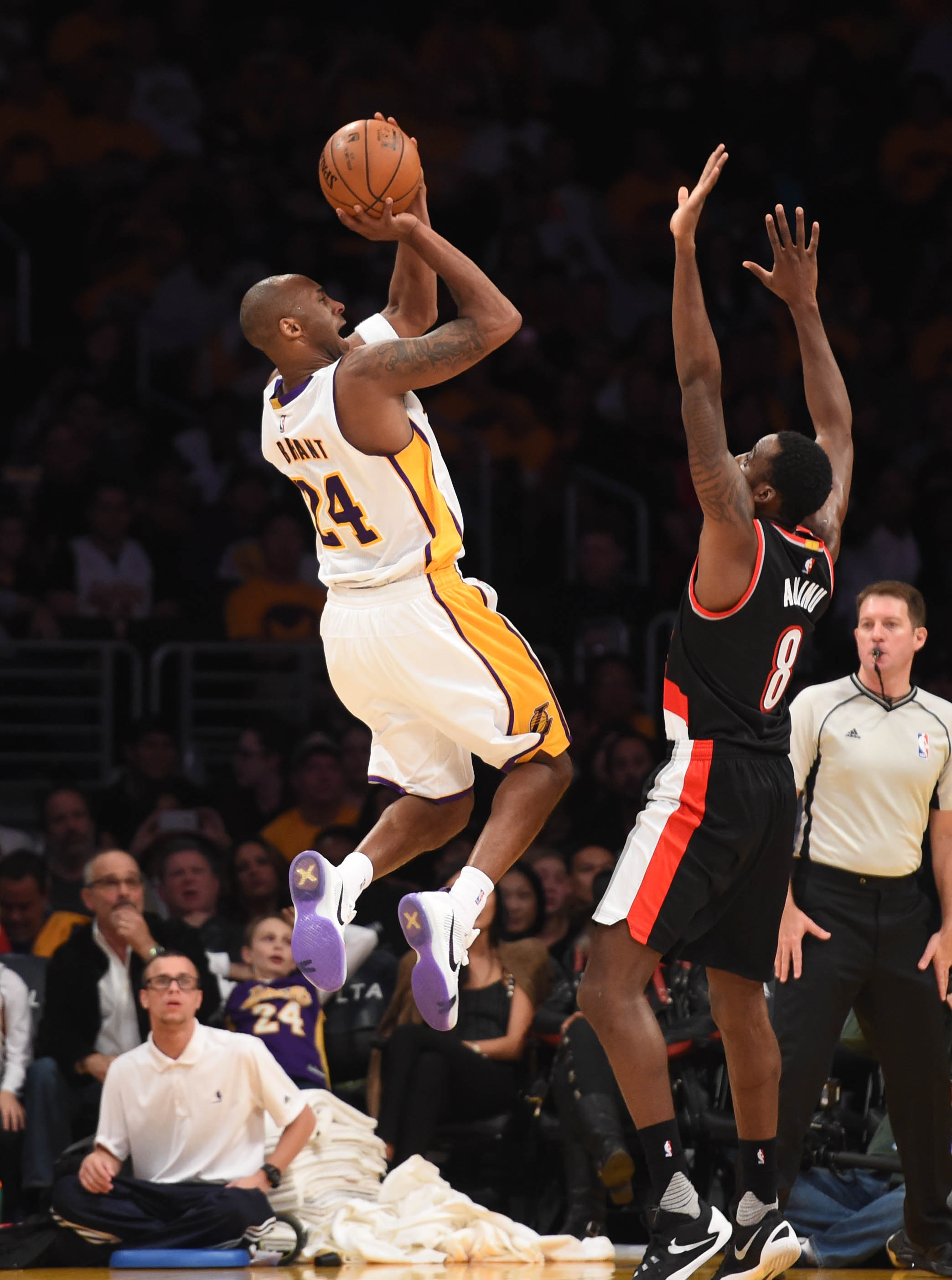 The jolly man laughed. He talked to several children sitting on his lap. He posted for pictures.

The kids may have shared what they wanted for Christmas. But the man was not Santa Claus. The man was Lakers guard Kobe Bryant, who became the center of attention during the franchise’s annual holiday party for 60 kids from School On Wheels, a tutoring service for homeless students.

“I wasn’t Santa himself. I was Santa’s worker,” Bryant cracked, as the reason why he didn’t wear a red suit and a hat. “I didn’t want to falsely represent the North Pole. I’m more like a contractor.”

Either way, Bryant may receive one Christmas gift that will come two months later. NBA Commissioner Adam Silver had argued Bryant should appear in the 2016 NBA All-Star game in Toronto on Feb. 14, 2016 during his 20th and final NBA season.

This would normally mark a no brainer for Bryant, who has been voted in for 17 All-Star games. But he has averaged only 16.5 points on 33 percent shooting, 4.1 rebounds and 3.6 assists.

The progression did not come quickly enough for Lakers coach Byron Scott. So much that Scott reduced D’Angelo Russell’s ball-handling duties. He sat him out in the fourth quarter both in its entirety and in crucial moments. He has also demoted Russell’s role to the bench.

But through all that, Scott argued that Russell has “been working” before practices and shootarounds on almost everything, ranging from his outside shooting and film study. Scott also praised Russel for remaining “pretty coachable” and “receptive” to his feedback.

“That’s one of the reasons why he’s played so well,” Scott said. “It’s starting to pay dividends for us.”

The Lakers secured a 113-95 win over the Milwaukee Bucks on Tuesday at Staples Center partly because of Russell’s presence. He posted 19 points on 7-of-13 shooting to go along with seven assists, four rebounds and three steals in 30 minutes off the bench.

That mirrors Russell’s production over the last four games where he has averaged 19.5 points and five assists per contests. Yet, that has coincided with Russell coming off the bench and then starting for two games while Jordan Clarkson stayed sidelined with a sprained right ankle.

So what enabled Russell to produce regardless of both the lineup he plays and the minutes Scott affords him?

“I just didn’t let it bother me,” Russell said. “I found ways I can get better from it. It looks like it’s working out well.”
END_OF_DOCUMENT_TOKEN_TO_BE_REPLACED

Kobe Bryant still sparks the loudest cheers whenever he hears his name announced in the starting lineup. He still hears the “MVP” chants when he steps to the foul line. He still commands the room, ranging from Byron Scott’s unyielding respect to his star player toward his younger teammates appreciating his presence.

But Bryant has discovered in recent days that he can thrive the most this season if he doesn’t demand the spotlight as much. The Lakers’ 113-95 win over the Milwaukee Bucks on Tuesday at Staples Center featured Bryant posting a game-high 22 points on 7-of-15 shooting from the field, 6 assists and 3 rebounds in 27 minutes by doing less with more.

“I just relax and just teach,” Bryant said. “If the plays are there, I take them. Whatever is in front of me, the play I’m making. If there’s an opportunity I see to teach, I do that. I’ve been able to find the balance in doing both. I’m very comfortable with doing that right now.”
END_OF_DOCUMENT_TOKEN_TO_BE_REPLACED