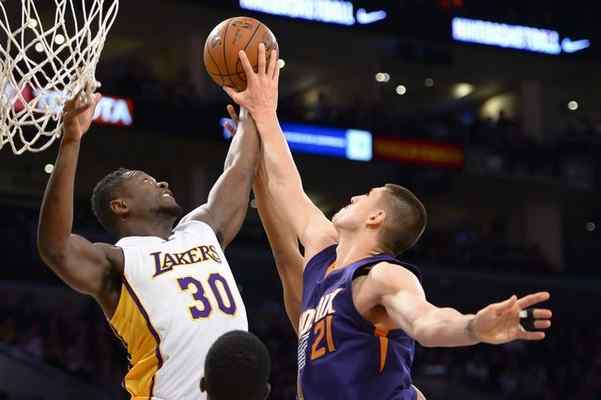 The disgusted look quickly formed on Julius Randle’s face. He refused to return any high-fives his teammates offered him. Randle then sat on the bench ready to unload a season-long worth of frustration filled with losses and fluctuating roles.

Mostly good vibes may have surrounded the Lakers’ 97-77 win over the Phoenix Suns on Sunday at Staples Center. But Lakers coach Byron Scott admitted he was not happy about reinserting his starters after the Lakers coughed up a 38-point lead late in the fourth quarter. That included Lakers forward Larry Nance Jr entering the game with 4:43 remaining for Randle, who overshadowed his 12 rebounds and three assists with two points on 0-of-4 shooting in 15 minutes. Moments beforehand, Randle had yelled at Lakers guard Marcelo Huertas for not giving him enough looks offensively.

That prompted Scott to call Randle out in front of the team afterwards.

“‘You have to guard your man,'” Scott recalled saying. “That was not just him. But I did mention his name in there. I said, ‘If you disrespect the game in there, it will disrespect you back.’ Our guys in that fourth quarter came out real lackadaisical like the game was over and Phoenix just kept playing.”

Once Randle stopped playing, Lakers forward Metta World Peace quickly talked with him on the bench. It did not take long for Randle to show more positive body language.

Randle did not speak with reporters afterward. But he has consistently repeated the mantra about “controlling what you can control.” On Sunday morning, Scott also praised D’Angelo Russell and Randle about handling their bench role, saying “the one thing I haven’t seen from one of those guys is them pouting or them worrying about it.” Yet, Randle has often shown frustration on the bench during various stretches of the 2015-16 season.

“Julius is a 21-year-old kid,” Scott said. “I don’t mind him getting mad when he’s getting taken out.”

Randle has averaged 11.5 points on 40 percent shooting and 9.9 rebounds through 24.5 minutes as a reserve, while averaging 11.7 points on 43.3 percent shooting and 9.2 rebounds in 28.4 minutes as a starter. Before Sunday’s off night, Randle had posted double-digit efforts in the previous three games. But Scott has resisted making lineup changes because of the Lakers’ recent winning streak. It also has not helped that Scott has fallen in love with Nance Jr, who posted 15 points on 7-of-10 shooting and 14 rebounds in 32 minutes.

“I haven’t run one play for Larry Nance,” Scott said. “He’s a guy that just plays basketball. He doesn’t take bad shots. He doesn’t make terrible decisions. He takes the shots that are given to him. He outworks most people when he plays. His athleticism helps. That’s what I was looking for when I made the change.”

More changes might come, such as Randle starting at power forward while Nance Jr. slides over to the small forward spot. But at least until the Lakers (8-27) stop winning, World Peace advised Randle to embrace his role.

“That’s not in his control. He can’t control that,” World Peace said. “He can control how he works out and how he prepares. I told him that about coming off the bench. I’ve seen guys come off the bench and finish games. He’s talented. He has a long future. He’s going to be all right.”

Scott said he was unaware about World Peace’s intervention. But Scott then gushed that “Metta’s been great in that role” despite sitting out the past 14 games because of a coach’s decision.

Byron Scott: Kobe Bryant “probably” will have to manage shoulder pain through 2015-16 season