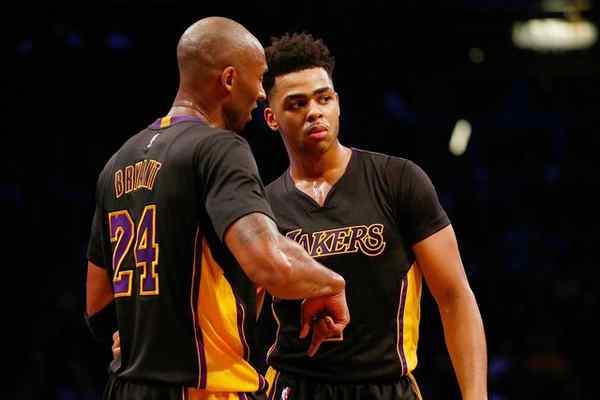 Lakers’ Kobe Bryant and D’Angelo Russell talk during game against the Brooklyn Nets on Nov. 6, 2015. (Photo by Mike Stobe/Getty Images)

It only took Lakers coach Byron Scott a quick conversation with Kobe Bryant on his travel itinerary before determining his return. After missing the past three games with a sore right shoulder, Bryant told Scott he plans to travel with the team on for when the Lakers (8-28) for Thursday’s game against the Sacramento Kings (14-21) at Sleep Train Arena.

“‘If you’re making the trip, that means I have a good idea that you’re going to play,'” Scott recalled telling Bryant. He said he feels good. That sounds good to me. If he makes the trip, I’m pretty sure he wants to play.”

It only took Scott a quick glance at Lakers rookie point guard D’Angelo Russell before sensing he felt better than the past two days when he missed most of Monday’s practice and Tuesday’s game against Golden State because of a sore throat. Russell completed half-court drills and looked energetic with Lakers assistant coach Larry Lewis and player development coach Thomas Scott.

“Unless he has some type of relapse tomorrow,” Scott said, “I expect him to play.”

Scott’s expectations with Bryant and Russell does not guarantee they will play.

The Lakers are still listing Bryant as questionable to play against the Kings. Although Russell said he feels “all right” after feeling fatigued, he did not guarantee an immediate return.

“The energy is there,” Russell said. “That’s the biggest thing. We’ll have to see gametime.”

But Scott sounded incredibly confident about Bryant, whose last game in Sacramento will spark another video tribute and bring back memories of the Lakers’ contentious playoff matchups with the Kings earlier this decade.

“The fans will be very respectful,” Scott predicted. “But as far as the game is concerned, that’ll be interesting to see how that goes.”

It’ll also be interesting how Bryant balances his health concerns and the want to play in every game for the last year of his 20-year career. After missing the last three games at home, is Bryant putting more importance in playing in road venues that he would visit for the last time?

“I’m sure a little bit of that went into play. But most of it is more he feels a lot better and he’s ready to play again,” Scott said. “If he felt the way he did two days ago, he wouldn’t be talking about playing in Sacramento. But progress has been made in the shoulder and it feels better.”