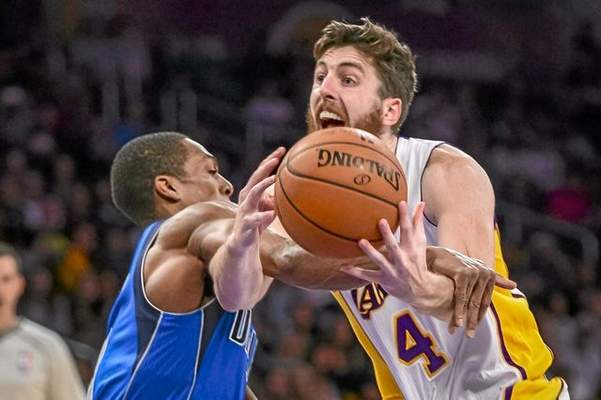 His shot went in the basket with dependable accuracy. He tested defenses by stretching the floor. He embraced any minute he stepped on the floor.

Ryan Kelly exuded all the qualities that the Lakers liked enough for him to select him 48th overall in the 2013 NBA Draft. But there was only one problem. In his third NBA season, Kelly has fulfilled this job description more with the Lakers’ Development affiliate than in purple and gold.

“It’s frustrating,” said Kelly, who has averaged 5.4 points on 48.8 percent shooting in 11.6 minutes through 11 games this season. “But that’s a huge part of this league. Huge part of it is opportunity.”

Lakers coach Byron Scott said Kelly hasn’t had that opportunity with the Lakers because of a bloated frontcourt featuring Julius Randle, Larry Nance Jr. and Brandon Bass. Scott has resisted playing Kelly at the small forward position as he did last year, mindful that compromised his ability to hit mid-range jumpers and space the floor.

“That makes my job that much harder,” Scott said. “But it’s not so much what he hasn’t done. It’s what those guys have done.”

Amid Kelly’s frustration, Scott still described Kelly’s attitude as “good.” That explains why Scott has told Kelly his plan to send him anytime he can to the Development League to make up for his on-court absences with the Lakers.

Through seven games with the D-Fenders, Kelly has averaged a team-high 27.0 points on 52.9 percent shooting from the field and 37.5 percent from 3-point range. He also has averaged 7.3 rebounds, 3.0 assists and 2.0 blocks a game. In the D-League showcase in Santa Cruz last weekend, Kelly has posted 29 points and 23 points through two contests.

“It’s not just an opportunity to work on my game. But the front office said it would be an opportunity to have plenty of people see me. I want to continue to go out and prove myself,” Kelly said. “I’m a way better player than I was before. It’s for other teams to recognize it whether it’s the Lakers or anyone else, I’m better.”

Will that be enough for the Lakers to include Kelly in a trade before the Feb. 18 trade deadline? Kelly, who will become an unrestricted free agent this summer, offered a neutral perspective on his preference.

“You can’t control that,” Kelly said. “Whatever happens, happens. I’m worried about myself getting better and getting prepared.”

Kelly reported improvement in his shooting and ball handling, but that has not translated on the court amid limited playing time. He still has posted his best season his rookie year when he averaged 8.0 points on 42.3 percent shooting in 22.2 minutes in 59 games, including 25 starts. Kelly then faced challenges during Scott’s first season by being featured at the small forward spot amid injuries to Nick Young and a frontcourt featuring Carlos Boozer, Jordan Hill, Ed Davis and Tarik Black. Kelly had also opened the season nursing overlapping injuries to his left and right hamstrings.

Beyond competing for minutes in another crowded frontcourt, Kelly also reported nursing two sprained ligaments in his right hand to open the season, something that had gone previously unreported.

“It’s certainly tough. Once you get in the role of the season, you’re not getting the same practice reps,” Kelly said. “That’s where the D League is helpful. It not only allows me to stay in condition, but also expand my game. That’s a role that I haven’t had in a long time where I’ll be the guy that gets the shot and I’ll be the guy that the other teams focus on stopping. You have to be able to expand your game. You just can’t be a spot up shooter. You can’t just be a one trick pony in this league when the ball is in the your hands a lot.”

It appears unlikely this marks what Kelly envisioned after a promising rookie season. But he maintained he’d “much rather play” in the D-League than wait patiently on the bench with the Lakers. Incidentally, Kelly could have played in Sunday’s game against the Jazz amid injuries to Kobe Bryant, D’Angelo Russell, and Bass. But that coincided with Kelly’s D-League responsibilities in Santa Cruz.

“I’m just trying to continue to work hard and set the right tone,” Kelly said. “There’s no question it’s frustrating. But I control what I can control.”