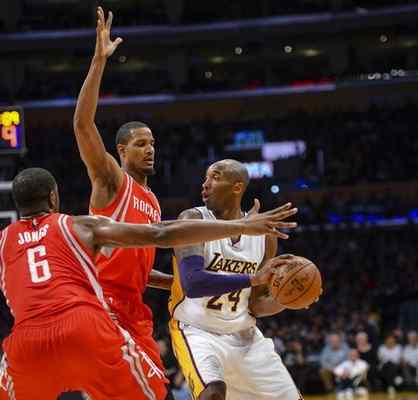 The opposing teams worry about his scoring outbursts. His tribute videos show a never-ending highlight of clutch baskets. Past teammates and coaches have even grumbled publicly and privately about the high-volume shooting.

But contrary to popular legend, Kobe Bryant has cemented a 20-year NBA career as a pretty good passer, too. So much that Bryant climbed to No. 2 on the Lakers’ all-time assists list during a 112-95 loss to the Houston Rockets on Sunday at Staples Center.

The 37-year-old Bryant eclipsed former Lakers player and executive Jerry West (6,238) for second place on the franchise’s list after throwing a pass to Lou Williams with 6:09 left in the second quarter. That play highlighted Bryant’s enhanced facilitating role where he posted five points on 2-of-5 shooting and nine assists in 24 minutes. Bryant only trails former Lakers guard Magic Johnson, who has 10,141 career assists.

Bryant’s become mostly feared as a scorer, obviously. He remains the Lakers’ all-time scorer with 33,054 points, a mark that also ranks third on the NBA’s all-time scoring list. Bryant posted a franchise-record 81 points on Jan. 22, 2016, a mark that only trails Wilt Chamberlain’s 100-point game in 1962. Bryant has logged 50-point games 19 times. He has posted 60-point games in three other instances.

“He’s not only just a scorer. He can do other things as he has shown for 20 years,” Lakers coach Byron Scott said. “It’s all predicated on the game and how the players are playing him.”

Bryant mostly has taken the scoring load this season, averaging 16.7 points on a career-low 34.6 percent clip with a team-leading 16.8 shot attempts. But Bryant assumed more ball-handling duties on Sunday because he was “moving well” amid recent soreness in his right shoulder and right Achilles.

“When he has the ball, pretty much everybody is watching him,” Scott said. “The defense is focused in on him.”

“I dish. It’s on them whether they make it or not,” Bryant said of his teammates. “It’s not rocket science to me. If I handle the ball and I penetrate, I can find guys pretty easily and pass the ball pretty well. It’s nothing new.”

After all, Bryant has posted a career-high 17 assists on Jan. 15, 2015 against Cleveland. Bryant somewhat deferred to Shaquille O’Neal when the two played together from 1996 to 2004 and won three NBA titles together. Bryant has recorded 21 career triple-doubles. He also appreciated teammates who passed the ball well to him to fuel his top skill in putting the ball in the basket.

Bryant hardly hesitated in naming the best passer he played with during his 20-year NBA career.

“Pau Gasol, no question. It’s not even close,” said Bryant, who won two NBA titles with Gasol from 2008 to 2014. “His vision, his timing and ability to pass the ball left hand and right hand and his size and ability to look over the top of the defense. He’s such a willing passer.”

On Sunday against Houston, so was Bryant.