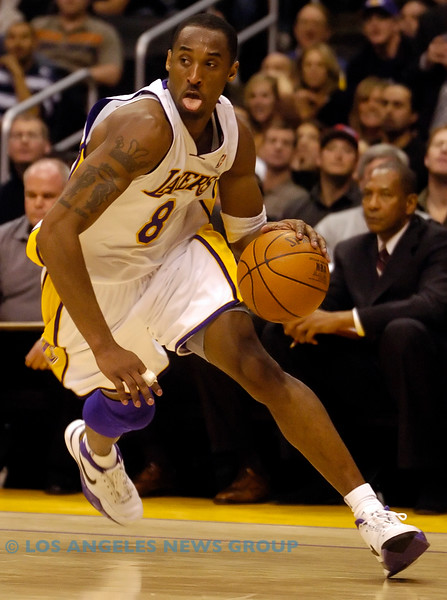 PORTLAND — The shots dropped into the basket with remarkable efficiency.

So much that Kobe Bryant initially outscored the entire Dallas Mavericks. So much that Bryant scored 62 points through three quarters, giving the Lakers enough cushion that he felt no need to play in the final period. So much that Bryant became the sixth player in Lakers history to score at least 60 points in a regular-season game.

And with the Lakers (9-37) facing the Dallas Mavericks (25-20) for the final time on Tuesday at Staples Center, Bryant narrowed in on one specific source that fueled his outburst.

“Del Harris,” Bryant said, sparking laughter both from himself and reporters.

Harris worked as a Mavericks assistant from 2000 to 2007. But before that, Harris coached the Lakers from 1994-1999 through Bryant’s first two NBA seasons. The Lakers then fired Harris after a 6-6 start in the 1999 lock-out shortened season. Bryant became frustrated playing for Harris, who featured him off the bench in 15.5 minutes per game his rookie season.

“When I was a rookie, I hated Del,” Bryant said. “I always said if I get a chance to get revenge, I’m going to get it.”

Bryant sought his revenge on Dec. 20, 2005 in the Lakers’ 112-90 victory over the Mavericks at Staples Center. He shot 18 of 31 from the field and converted on 22 of 25 foul shots in 32 minutes. He scored 30 points in the third quarter, including a three-pointer with 4.4 seconds remaining in the period to eclipse the Mavericks’ point total (61).

Yet, Bryant argued that his career-high 81-point performance on Jan. 22, 2006 against Toronto became more difficult because “my knee was killing me.” When Bryant reported feeling “fantastic” against Dallas with both his health and for sticking it to Harris.

“That being said, he pushed me back then to try to be as efficient as possible to get some minutes on the floor,” Bryant said. “I had to earn everything I got. I’m very appreciative now. But I’d be lying if I said that wasn’t part of the motivation.”