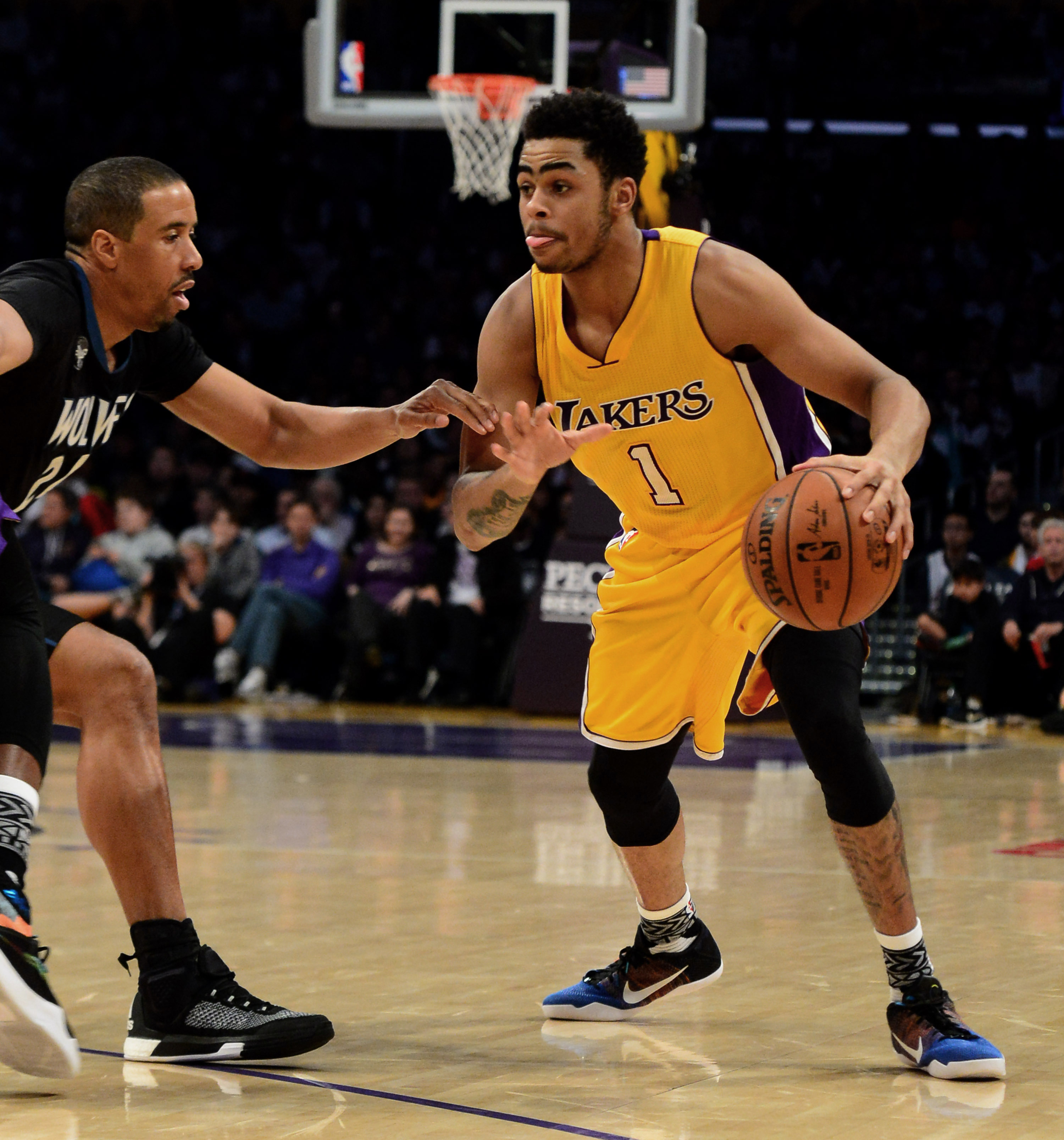 Los Angeles Lakers guard D’Angelo Russell (1) drives to the basket against Minnesota Timberwolves in the first half of a NBA basketball game at Staples Center on Tuesday, Feb. 2, 2015 in Los Angeles.
(Photo by Keith Birmingham/ Pasadena Star-News)

The Lakers’ rookie point guard has experienced quite a whirlwind this season amid hype as the team’s No. 2 draft pick, losing his starting position and sitting out frequently during the closing minutes. Russell has also experienced steady improvement with his aggressiveness, offensive command, post play and outside shot.

“I thought he’d probably be a little bit further,” Scott said following morning shootaround at AT&T Center, where the Lakers (11-41) will play the San Antonio Spurs (41-8) on Saturday. “But being at 19 years old, I always take that into consideration. Every time I chastise him about something or get mad at him about something, I go back that he’s 19.”

Russell heard those words nearby as he completed a shooting routine behind the 3-point line. In between shot attempts, Russell made a series of goofy facial expressions toward Scott. The Lakers’ head coach noticed and laughed.

“See what I mean?” Scott said, chuckling. “I have to remind myself of that that he’s still a kid and still learning an still figuring out what this league is all about.”

A humorous and honest dialogue then took place that captured what Scott described as a “playful relationship with Russell.” Scott also added he often tells Russell in a teasing manner, “You’re 19 but sometimes I think you’re 14. You’re 19, but today you’re 22 or 23.”

A reporter then pointed out that Russell had made five consecutive 3-pointers and suggested Scott owes his rookie point guard money amid playful bets the two make.

“It was 10 in a row,” Russell said, correcting the reporter.

“I made him make five free throws in a row,” Scott said.

“How easy was that?” Russell boasted after taking another 3-pointer.

“You said, ‘You love how I make shots in practice….,” Russell said.

Scott then rolled his eyes and said, “Quit lying.”

Russell completed his thought adding, “Then you said, ‘Why don’t you make so many in the game?”

“You didn’t say that,” Russell countered.

“I did say that,” Scott said before looking at reporters. “Just like that. Do that [stuff] in a game.”

Russell has done that at times.

He has averaged 15.5 points on 50 percent shooting during the Lakers’ recent two-game winning streak. He posted a career-high 27 points on 11-of-16 shooting in a near comeback win last month in Sacramento. The last time that Russell stepped foot here in San Antonio two months ago, he posted 24 points on a 9-of-23 clip. That happened merely two days after leading a near-come back win over Minnesota with a 23-point performance on 8-of-20 shooting, a basket to force overtime and a missed potential gamer winner in extra regulation. Last month, Russell went on an eight-game tear where he logged double digits in scoring.

But Russell also has logged 19 games where he has finished with only single digits in scoring. He has played in 23 games healthy in which he posted no more than three assists. He played in 10 games where he committed at least four turnovers. And Scott still wants to see Russell improve on defense and moving off-the-ball.

“He’s gotten so much better in all those areas,” Scott said. “But I know and he knows he has a long ways to go to get better as well.”

Russell will still come off the bench for the Lakers’ three remaining games before NBA All-Star weekend. Afterwards, Scott will likely start him. But whenever that decision happens, Scott said he will not give his rookie point guard a heads up.

“He’s not old enough for me to have a meeting and discuss, ‘What do you think?'” Scott said.

A meeting only took place when Scott became struck last week that Russell argued he does not deserve a starting spot amid his recent struggles. Russell has never publicly criticized Scott. But throughout the season, Russell has occasionally admitted his hope for a bigger role and his struggles with Scott’s system.

“I asked him the other day about his comment that he doesn’t deserve to start,” Scott said. “I asked him, Why would you say that? He said, ‘I don’t with the way I’ve been playing lately.’ That’s self policing. I thought it was good he felt that way. He knows he has to continue to work and get better. When he gets that opportunity to start again, hopefully he takes full advantage of it.”

Amid those demanding expectations, Scott then offered perspective on Russell’s journey.

Scott admitted very few could successfully navigate the NBA at Russell’s age, including himself.

“I don’t envy the kid. The team that he would’ve been on would’ve eaten him him up,” Scott said referring to the Lakers’ Showtime Teams with Magic Johnson, Kareem Abdul-Jabbar, James Worthy and Michael Cooper. “I couldn’t have played and handled this at 19. I know for sure. I’m glad when I came in, I was 21 years old and had a few years of college under my belt. Obviously I’m very happy with the team I had been with and those guys were true professionals. Their work ethic was unbelievable and they taught me what it took to be a pro at an early age. It was beneficial to me to come to a team like that. They have so many stars that were already established. They were all about one thing, which is winning. That made my job easier.”

Scott also argued the Lakers made it easier for the head coach.

“Ask Pat Riley why it was so easy to coach the Lakers. Magic allowed him to coach him,” Scott said. “Magic did not mind him jumping on him. He jumped on Magic, myself and Coop damn near every week it seemed like. Later on, he told me, ‘I did it because you guys could take it and you took it the right way.’ There’s a lot of players that say they want to be coached and want to be great. But those are words a lot. As soon as you call them out and you push them, there’s some resistance at times. It’s a totally different generation.”

That generation includes the 19-year-old Russell. In one year, he went from a star point guard leading Ohio State to the second round of the NCAA tournament toward playing on the Lakers amid one of the worst seasons in franchise history.

And so amid that frustration, a playful exchange between Scott and Russell played out in front of reporters to offer a new prism into their relationship.