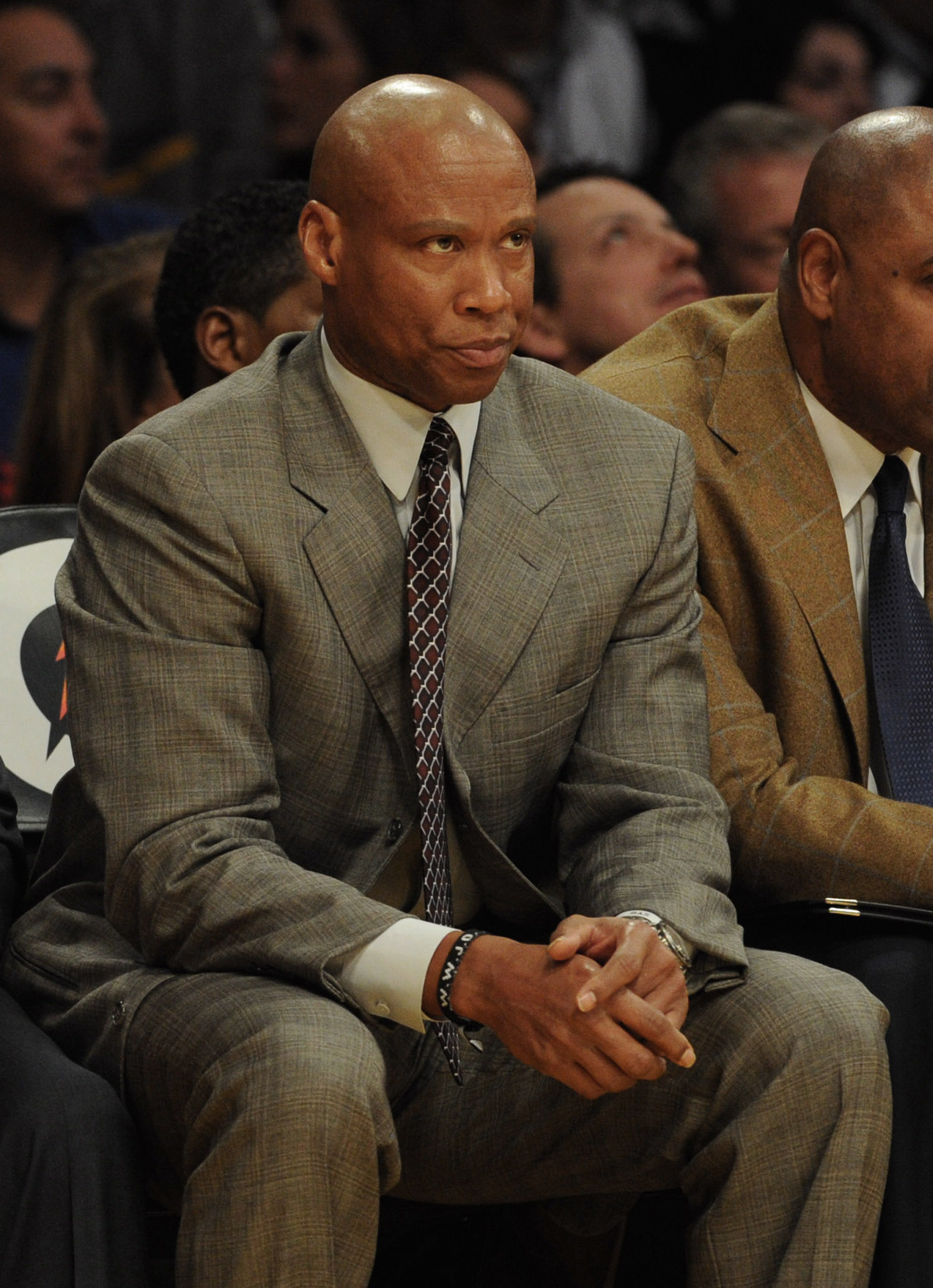 Lakers head coach Byron Scott, left, looks on against the Minnesota Timberwolves in the first half of a NBA basketball game at Staples Center on Tuesday, Feb. 2, 2015 in Los Angeles.
(Photo by Keith Birmingham/ Pasadena Star-News)

INDIANAPOLIS — The news struck Byron Scott in multiple ways. The Lakers’ coach sounded incredulous over the Knicks firing Derek Fisher as head coach, both out of respect for the coaching field and because they played one season together nearly 20 years ago with the Lakers.

“I just shook my head,” Scott said. “I’ve been in this business a long time. Nothing really surprises me. But was I a little surprised by that? Yeah.”

Fisher finished with a 40-96 record in what marked the worst finish in franchise history. Fisher’s time with the Knicks also became marred amid Memphis forward and former Lakers forward Matt Barnes having a physical confrontation with after Fisher had visited Barnes’ estranged wife, Gloria Govan.

Yet, Scott did not anticipate the Knicks (23-31) would make a change considering they trail only 2 1/2 games for the eighth and final playoff spot in the Eastern Conference.

“I thought New York was doing pretty well,” Scott said. “They’re still in the hunt. I was surprised.”

Scott also suspected Fisher would have more time considering the relationship he had with Knicks president Phil Jackson. With Fisher playing on Jackson’s five NBA championship teams with the Lakers, Jackson then hired Fisher to a five-year, $20-plus million deal in June 2014 shortly after retiring from a 18-year NBA career.

“I don’t know who made the decision or what,” said Scott, mindful that Knicks owner Jim Dolan may have had some influence. “But that makes it surprising.”

Former Lakers forward Kurt Rambis will coach the Knicks as an interim basis. He won four championships with the Showtime Lakers, served as interim coach (1999) and spent various seasons as an assistant.

It remains to be seen what’s in store for Fisher. The Lakers already remain committed toward retaining Scott through at least the 2015-16 season and plan on evaluating him this offseason. Before the Lakers eventually chose Scott to become their head coach, the Lakers did not interview or express any interest in Fisher amid his lack of head-coaching experience. Fisher played for the Lakers in two separate stints (1996-2004, 2007-2012) before the Lakers traded him and a first-round pick to Houston for Jordan Hill.

“Every situation is different,” Scott said on coaching firings. “It really depends on what the GM and owners want. Some are unrealistic in some instances. I have no clue, to be honest with you about what most teams want. Fisher is a prime example. This business is very, very hard to deal with a times. But you have to deal with it. This is the chosen profession for us. You’re going to deal with sometimes getting fired unexpected and sometimes it’s warranted. You just have to deal with it.”

Roy Hibbert facing much different situation with Lakers than Pacers