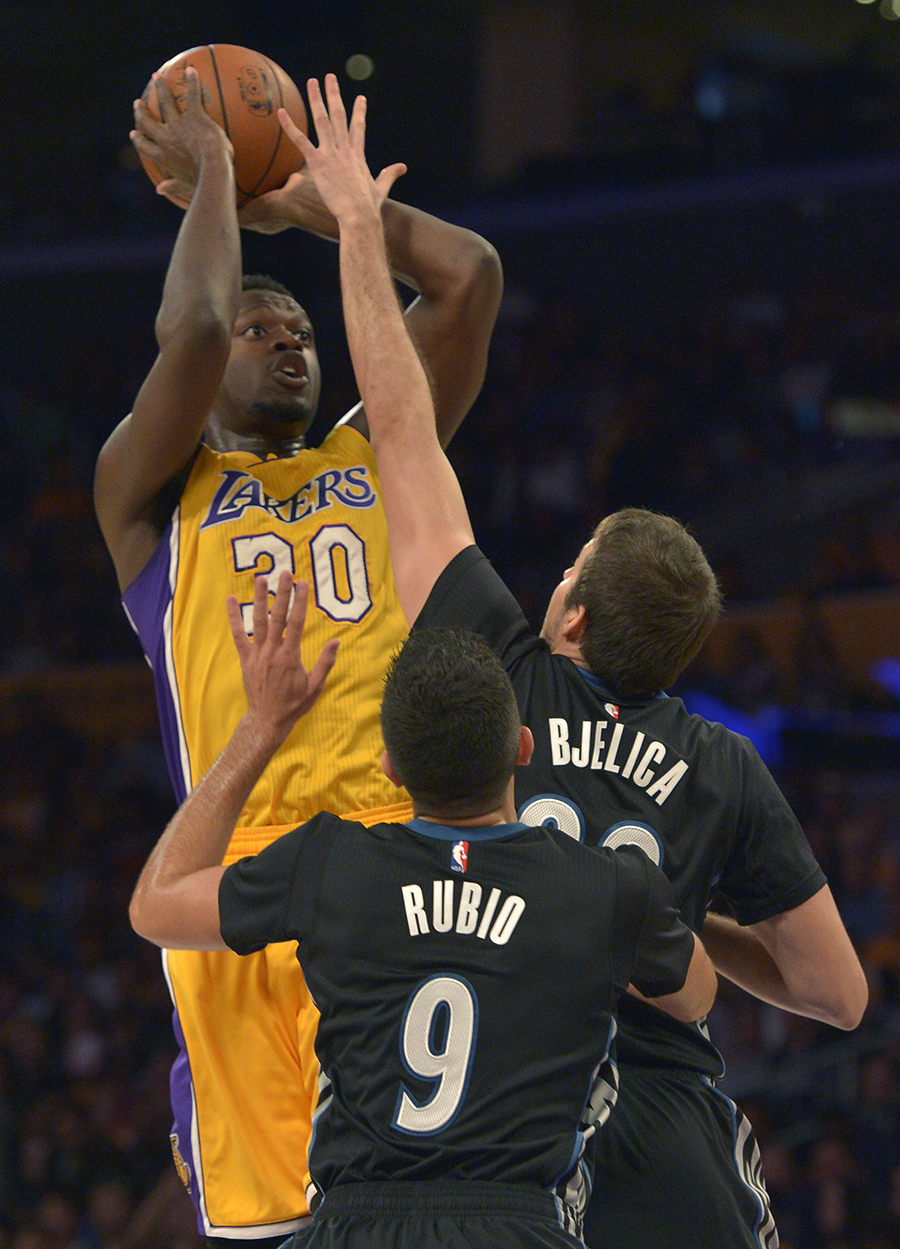 Below is an edited Q&A with Lakers shooting coach Tracy Murray about the development of Lakers second-year forward Julius Randle in his jumper. Murray had a 12-year NBA career, including one season with the Lakers (2002-03).

What has gone into Julius’ progression with his jump shot?

Murray: “Slow down, slow down, slow down. But as a player, you don’t know if you’re moving fast until you see the video and until you know the tempo. For Julius, this is really his rookie year. If he played last year, he would know the tempo of the game already. It can’t be always fast. You have to change speeds. You can be fast in the open court. From one end to the other, you bust. But in half court, it’s about quickness and changing speeds. He’s starting to figure that out now.

With his shot, he’s taking it with confidence. He’s not second-guessing. He’s stepping into it knowing he’s going to shoot the ball. Nothing is going to happen bad for him if he takes that shot. We need him to do that. That eases any worry of him looking over and wondering if he’s coming out and shooting a jump shot. That was never something that would happen here anyway. But that’s a natural reaction. His mind is free. He sees enough of them go through the basket every day and he knows he can make it. He’s seen a few in the game go down. So now he’s starting to transfer it over now. With him going to the basket, he’s not much of a bowling ball anymore. He’s getting to his spots. If they cut him off, he’ll spin, create a foul or get a good look. He’s starting to figure that out. All that is is slowing down and reading what is in front of you.”

Did anything change in his mechanics?


Murray: “Nothing changed in his mechanics. The great Reggie Miller didn’t have the prettiest shot. But he’s a Hall of Famer because he can knock down shots. Jamaal Wilkes didn’t have the prettiest shot, but he knocked down shots. It’s not so much the form as much as it is knowing how to work within your form. With Julius, his form is like Zach Randolph. He just has to slow the shot down and get the ball up in the air. When he was going up fast, he was shooting the ball straight like it was coming out of a cannon.

So when he slows it down and is on balance and goes up, now he’s able to get it up over the air and into the rim. It’s about rhythm. Shooting is 90 percent mental and 10 percent rhythm. You have to find your rhythm and release point as a player. He doesn’t jump very high on his shot. But with him, that’s okay. He has fast feet. If somebody runs at him, his strength comes into play. He can also take his time to knock it down. So he can be Sam Perkins or be Zach Randolph. When they run at you, then attack and then you’re gone.

Can you take me through what his daily routine is with his shooting regimen as well as working with you?


Murray: “Well the summer is when you grow as a player, not during the season. So right now, he’s just trying to get this catch-and-shoot thing consistent. I talked to him a little bit earlier about ramping it up in the summer. Everybody knows he can now knock down a shot. So now everybody is going to run at him. We’ll work on the ball fake and one-bounce dribble pull-ups either way. When he puts the ball on the deck to shoot, it’s still fast. He needs to pump fake, make one quick dribble, slow his shot down and then knock it down. His shot still needs to slow down, but we want his feet to be fast so they will bite on his pump fake. Then he can take his time knocking down his shot since he has his defender up in the air.”

How many shots will he be getting up?

Murray: “I was taking 800 to 1000 shots per day. I was a shooter. But he can’t do that during the season. During the offseason, he can complete so many drills that we’re going to be working on to broaden his shooting game. We’re going to work on quite a few. We’re going to shoot for that range. It depends on how much he can take and focus on it. I focused for hours on my shot because that was my bread and butter.

Considering the season demands, how many shots are we talking that he takes a day?


Murray: “Right now with games involved, he has the routine where he’ll shoot 20 shots each in five to seven spots. He does that for right now. It’s usually after or before practice so he’s not wearing himself out. Right now, it’s just fine tuning. It’s also fine tuning the brain to see the ball go through the net and get instant confidence. It’s very visual with shooters. I used to get here three hours before the game with no one on the court. I couldn’t shoot with anyone on the court. I would shoot before the game in layup lines. But beforehand to get my mind right, I came in here three hours before and got in a good 200 shots fully concentrated. I had to see it go through the net constantly. That’s how you develop your muscle memory in watching the ball go through the net and knowing your release point. Sometimes you’re tired and your release point is different so you’re not jumping as high. Then you have to adjust the arc on the shot. It’s always a constant adjustment with shots. You try to shoot every single one the same way. But when you’re tired, you physically can’t shoot the same way.”