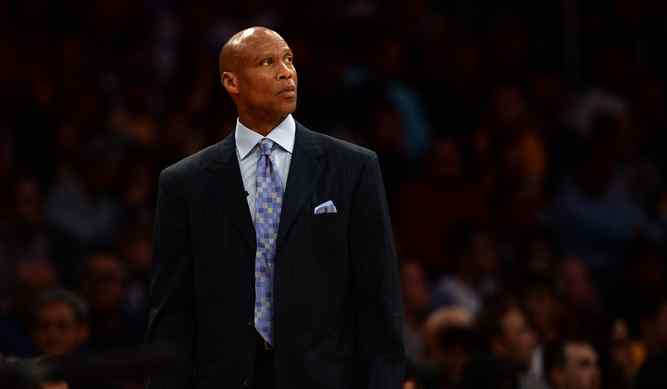 MEMPHIS — The question initially disturbed Lakers coach Byron Scott. So much that he professed he did not want to answer it.

With the Lakers (11-47) entering Wednesday’s game against the Memphis Grizzlies (32-23) at Fedex Forum with the NBA’s second-worst record, how much has Scott thought about helping the Lakers’ odd to retain their top-3 protected pick?

After some prodding, Scott sounded eager to answer.

“You can’t try to lose basketball games,” Scott said. “That’s a bad way to present to our team that we’re trying to lose so we can protect the top three pick. That’s a bad omen to me. We didn’t try to do that last year.”

Then, the Lakers went 21-61 and finished with the NBA’s fourth-worst record and would have owed their pick to Philadelphia if it landed in the top five. But the Lakers then moved up two slots in the lottery to land the No. 2 pick, which was used to select point guard D’Angelo Russell. At the time, Scott argued the Lakers became fortunate partly because of the karma stemmed from his players still competing throughout the entire season.

“It sets a bad precedent to me, especially to this organization and people who have been in this organization for a long time,” Scott said. “We’ve never been like that and never will be. I never even behind closed doors tell my players, tell my coaches, tell the trainers or anybody that we’re trying to lose games on purpose to protect the pick. That’s not my nature.”

The Lakers have lost games, anyway, perhaps making this a moot point. But with the Lakers undecided if they will fulfill his four-year contract worth $17 million after this season, Scott spent the beginning of the season relying on Kobe Bryant and a veteran-laden roster while featuring D’Angelo Russell and Julius Randle off the bench. Scott gradually increased their workload once he believed they earned their time and the record worsened.

“We’re going to go out and still try to win every game to the best of our ability,” Scott said. “Now are we going to do that? Probably not. But we’ll at least give it our best shot. I’m not coaching looking at the clock thinking, ‘If they could just turn it over a few more times and miss a few more shots, this game is in the bag as far as a loss is concerned.’ That’s not me. As a competitor, when the game is being played, I’m trying to win period. I don’t look at our players and tell them to lose games on purpose. I’m trying to win every game and build something with the young guys that we have here.”