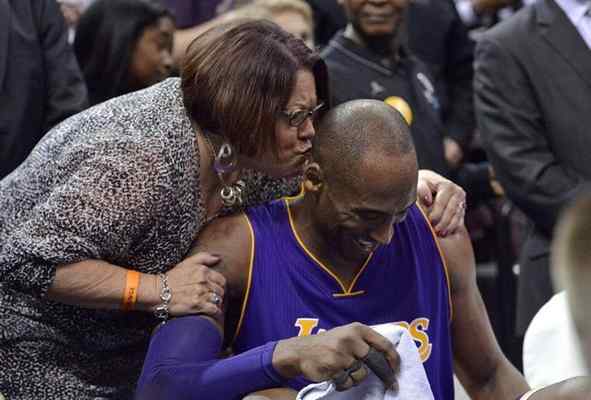 Charla Lofton leaves her seat to kiss the Lakers’ Kobe Bryant during the final seconds of Wednesday’s game in Memphis. (AP Photo/Brandon Dill)

MEMPHIS, Tenn. – The endless praise went against Kobe Bryant’s thirst for confrontation in heated competition. The smiles and friendly exchanges contradicted Bryant’s rough exterior. The lavish gifts seemed too sentimental for a player who entered every game seeking to destroy the opposition.

But despite his initial urges to avoid having a farewell tour during his last NBA season, Bryant decided otherwise. Nearly three months ago, he publicly announced his plans to retire following the 2015-16 campaign. Opposing team venues have featured endless video tributes and standing ovations. Games at Staples Center are just as festive and nostalgic. And Bryant has soaked in the atmosphere. He has become friendly with coaches, teammates, opponents and reporters alike that he encounters during his last stops.

“It’s fun. I’ve been enjoying it,” Bryant said before the Lakers’ loss to the Memphis Grizzlies on Wednesday at FedEx Forum. “It’s been great to go from city to city and say thank you to all the fans and be able to fulfill that in return. It’s been good. It makes me feel thankful to be able to have this and to be able to feel like the work I’ve done is appreciated. Hopefully the fans can feel how thankful I am for them as well.”

It appears that they have.

Fans both on the road and at home have showered him with cheers during lineup introductions. The atmosphere has become electric anytime Bryant makes a shot or goes on a scoring outburst that reminds everyone of his prime years. Whenever Bryant has exited the game, the Lakers’ 37-year-old star has often placed his hand over his heart before waving to the adoring crowd.

Bryant has appeared just as emotional with his opponents. He has talked trash and swapped stories with defenders that have tried to stop him, opposing stars that have tried to outshine him and former teammates that appreciated his presence. He has hugged those players at midcourt before the game. He has done the same thing afterwards.

All of which shows Lakers coach Byron Scott that Bryant has become “at peace” during the final season of a wild and accomplished 20-year NBA career.

“His demeanor has been totally different,” Scott said. “He still loves to compete. But I think he appreciates the fact that everybody is showing him so much love and respect after playing against him for 20 years. That gets to his heart. He really feels that.”

He wanted to share his plans publicly before anyone else.

He sounded mindful that his expiring $25 million contract would give the Lakers both clarity on their offseason and leave them with a vacant hole on filling out their roster.

“You start with the organization and franchise,” Bryant said. “This way you can make your plans in terms of how to rebuild and things of that sort.”

He has spent his press conferences sharing stories that shape the narrative of his 20-year career that has become far more interesting than just a resume that entails five NBA championships, a third-place standing on the league’s all-time scoring list and an eventual Hall of Fame induction.

“I felt like I had a purpose,” Bryant said. “The purpose was to be the best basketball player I can be. Everything I did in life was looked at through that funnel. Whether people agreed or disagreed or had a different view of how my life should be, I never let that get in the way. I had one direction. I had my north star and I went for it.”

Bryant has shed some light on his post-retirement plans. After launching Kobe, Inc, Bryant plans to channel that focus toward storytelling in various media platforms. Bryant shed some light on Wednesday by saying he will become involved with producing sports films that go beyond the “30-for-30” documentaries.

“I believe sports films should be done differently,” Bryant said. “I’m incapable of doing anything that’s already out there. I just can’t do it. I think there’s a certain level of detail in nuances to the game that is a great form to being able to teach the game for the next generation of athletes. There’s a great amount of detail that can be conveyed through storytelling. I’m really really excited to get to that.”

And lastly, Bryant made his plans public after realizing he could embrace a tour that Derek Jeter experienced. Then, Bryant can still satisfy
his competitive juices during games while showing a more sentimental and reflective side as he processes the final stages of one wild ride.

“I’m able to say thank you to the fans and being able to enjoy openly coming here for the last time and other places,” Bryant said. “Being able to let you guys know and the fans know how much I appreciate you guys over all these years, it’s been great.”