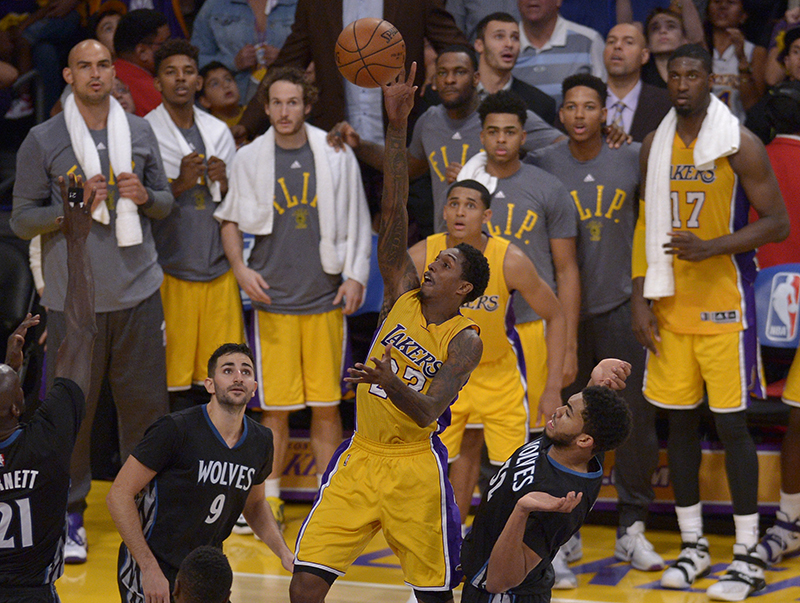 Los Angeles Lakers guard Louis Williams #23 takes and misses the last shot of the game. The Lakers lost to the Minnesota Timberwolves 112-111 in the opening game of the 2015-16 NBA season. Los Angeles, CA, 10/28/2015 (photo by John McCoy/Los Angeles News Group)

Lakers guard Lou Williams will stay sidelined for at least a week after an ultrasound taken on Wednesday confirmed he has a strained left hamstring.

Williams missed the second half of the Lakers’ 107-101 victory over the Brooklyn Nets on Tuesday at Staples Center and did not travel for Wednesday’s game against the Denver Nuggets at Pepsi Center. According to the Lakers’ initial timeline, Williams will miss at least a total of five games. That will also include home games against the Atlanta Hawks (Friday), Golden State Warriors (Sunday) and Orlando Magic (Tuesday).

Williams has averaged 15.2 points and 2.5 assists per game, his role fluctuating proportionally to D’Angelo Russell’s workload. Williams came off the bench for the first 20 games before taking Russell’s starting spot. Lakers coach Byron Scott has since inserted Russell back into the starting lineup for the past five games.

During that stretch, Russell has averaged 21.4 points while shooting 55.2 percent from the field and 62.1 percent from 3-point range and tallying 4.8 assists and 4.0 rebounds per game. That included Russell’s career-high 39-point game on Tuesday against Brooklyn, which marked the most points a Lakers rookie scored since Elgin Baylor had 39 points on March 11, 1959.

Williams’ absence will open up even more playing time for the Lakers’ backcourt, including Russell, Jordan Clarkson and Marcelo Huertas. Forwards Nick Young and Anthony Brown could play more as well.

Williams had an ultrasound examination with Dr. Steve Yoon on Wednesday morning.