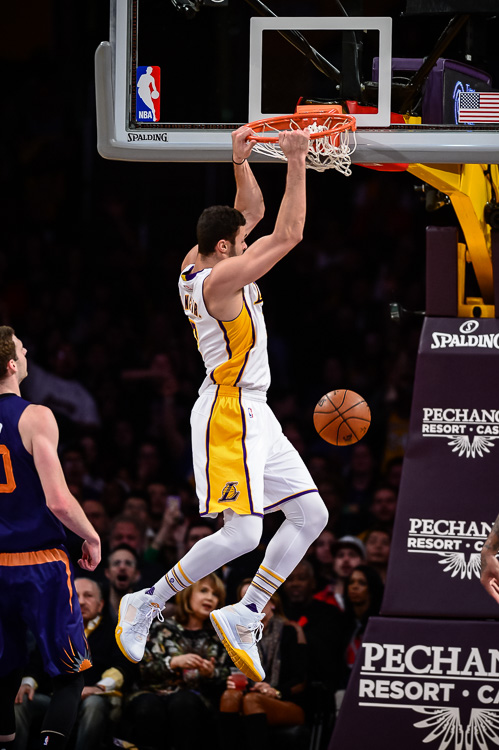 The inconsistent play irritated Byron Scott. So did the playful personality. But another variable has emerged that could keep Nick Young out of the rotation for the rest of the season.

Scott wants to feature rookie forward Larry Nance Jr. at the small forward position along with Julius Randle at the power forward spot. Scott began with that experiment in the Lakers’ 106-98 loss to the Sacramento Kings on Tuesday at Staples Center.

But considering the Lakers nursed injuries both temporary (Kobe Bryant) and long-term (Anthony Brown), it became telling that Young both lost the starting small forward spot to Metta World Peace and experienced his third consecutive healthy scratch. It likely has not helped that Young has averaged 7.3 points on a career-low 33.9 percent clip.

“I don’t know what those guys can do together,” Scott said of Nance and Randle. “So some of that has to do with what they can do and what I want to see them try to do as opposed to what Nick can’t do.”

Scott said in recent days he would like to see Young becoming more effective in games even during his shooting slump. But that may have become a lost cause for Scott, who saw Randle posted 14 points and 11 rebounds while Nance added 12 points and nine rebounds. The pair also closed the game out inn the final 5:57.

“I liked the activity those two guys bring,” Scott said. “Larry is a part of that group of young guys we want to play a lot.”

Scott maintained Nance is “still on a minutes restriction” stemmed from a sore right knee that kept him out of six consecutive games last month. But Nance logged 25 minutes. Scott also conceded Nance “is not that 3-point shooting threat yet” after going 1-of-5 the entire season. But Scott added Nance has “done it during practice” and has encouraged him to take those shots during games.

“He has the potential to be one,” Scott said of Nance at the small forward spot. “He definitely has the versatility to do it. Skill-set wise, that’s definitely something we have to work on.”