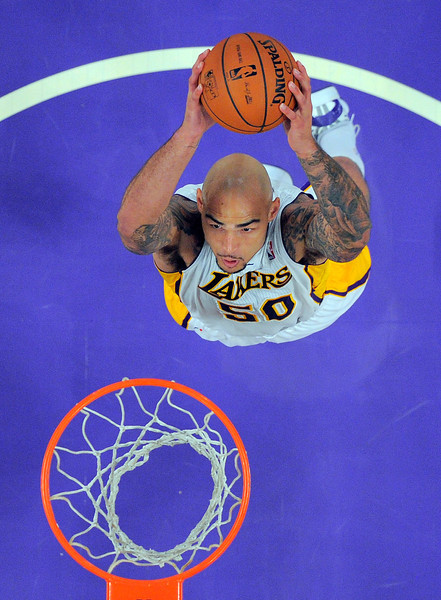 The playing time has become as scarce as the Lakers’ victories. But Lakers reserve center Robert Sacre kept repeating one message to himself as he unexpectedly entered the rotation in the Lakers’ 106-98 loss to the Sacramento Kings on Tuesday at Staples Center.

“I came out and said I was going to have fun,” Sacre said. “I didn’t think about it.”

Sacre then lived up to his word. After sitting out the seven previous games because of healthy scratches, Sacre did something he could not do amid the 48 total missed appearances because of a coach’s decision. He produced, logging 10 points on a 5-of-5 clip and five rebounds in 22 minutes. Two minutes after Sacre entered the lineup with 3:11 in the first quarter, Sacre hit a 14-foot jump shot in what marked his first points since Feb. 26.

“I didn’t put too much pressure on myself,” Sacre said. “I said, ‘Okay tonight is going to be a game will be loose and I’ll enjoy the moment.'”

Sacre unexpectedly had an increased role because reserve forward Brandon Bass after suffering corneal abrasion in his right eye. Sacre also played after starting center Roy Hibbert and reserve forward Tarik Black fell to early foul trouble. But after missing Thursday’s game against Cleveland to attend the birth of his daughter, Sacre did not look rusty.

“I thought Rob came in and did great,” Lakers coach Byron Scott said. “I thought he played extremely well on both ends of the floor.”

Sacre would hardly describe his experience in the 2015-16 season that way. After the Lakers drafted him 60th overall in 2012, Sacre has averaged 3.1 points on 42.9 percent shooting and 2.4 rebounds in 12.9 minutes through 20 games, marking the lowest he has recorded in points and playing time since his rookie season. Meanwhile, the Lakers are on pace to miss the playoffs for the third consecutive season.

“It’s been really tough,” said Sacre, who will be an unrestricted free agent this offseasonn. “That’s the whole point about this. We get paid the big bucks for that reason just to be ready and stay ready. You just have to be ready when your name is called.”