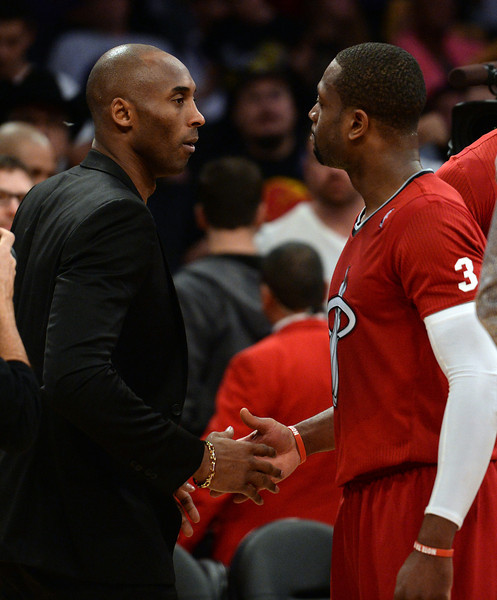 The Lakers’ Kobe Bryant shakes hands with Dwyane Wade after their game at the Staples Center December 25, 2013. The Heat beat the Lakers 101-95. (Photo by Hans Gutknecht/Los Angeles Daily News)

The pain persisted, leaving both Kobe Bryant and Dwyane Wade with only one option amid a sleepless evening in Miami.

“I had to go in and take care of my body,” Bryant said. “He came strolling in and had to do the same thing. We compare notes quite often.”

Those notes hardly just involved basketball plays. They involve medical charts, rehab routines and dietary suggestions. Bryant has tried to maximize all those areas as he recovered from season-ending injuries to his left Achilles tendon (April 2013), left knee (Dec. 2013) and right shoulder (Jan. 2015). Wade has had to do the same thing amid limitations in 2013-14 (knees), 2014-15 (left hamstring) and 2015-16 (thigh bruise).

It appears likely Bryant and Wade will share more notes when the Lakers (15-59) host the Miami Heat (43-30) on Wednesday at Staples Center. Bryant said he and Wade have “developed a great friendship” ever since he entered the NBA during the 2003-04 season.

“We talked this summer quite a bit about training,” Bryant said. “He was asking me what can you do at t his stage of your career. Not just maintain yourself, but get stronger as the season goes on.”

Miami’s Dwyane Wade on Kobe Bryant: “Never count him out”