The Lakers’ promising young player sprinted up and down the floor with grace. He sank open shots with ease. He kept an eye on his teammates, and quickly set them up when they had open looks.

Lakers rookie point guard D’Angelo Russell may have placed most of the blame on himself for the recently stalled ball movement. But in the Lakers’ 116-105 loss to the Denver Nuggets on Friday at Staples Center, Julius Randle played the bigger role in reigniting an offense based on team concepts instead of one-on-one play.

While Russell left in the second quarter with a moderately sprained right ankle, the 21-year-old Randle became the youngest Lakers player since Magic Johnson to record a triple double that included 13 points, 18 rebounds and 10 assists. The performance marked what Lakers coach Byron Scott called the “only big time positive” in a game that featured very little defense and uncertainty surrounding Russsell’s health.

“We haven’t been moving the ball great,” Randle said. “We really haven’t been getting each other going the last couple of games. So I just tried to look at it differently and get my guys going.”

END_OF_DOCUMENT_TOKEN_TO_BE_REPLACED

Lakers guard D’Angelo Russell needed his teammates to carry him off the floor during Friday’s game against Denver after suffering what the team called a moderately sprained right ankle.

The Lakers said x-rays turned out negative, but Russell sat out for the second half. The Lakers will then evaluate Russell on Saturday to assess the extent of his injury. Russell exited with 3:10 remaining after turning his right ankle after stepping on the shoes of Denver guard D.J. Augustin during a defensive rotation.

This marked the second time in a week Russell left a game early after suffering an ailment. He bruised his left shin in Tuesday’s game against Memphis after colliding into JaMychal Green. Russell missed the second half before returning in Wednesday’s contest in Phoenix.

Russell finished with two points on 1-of-4 shooting and zero assists in 12 minutes against the Nuggets. 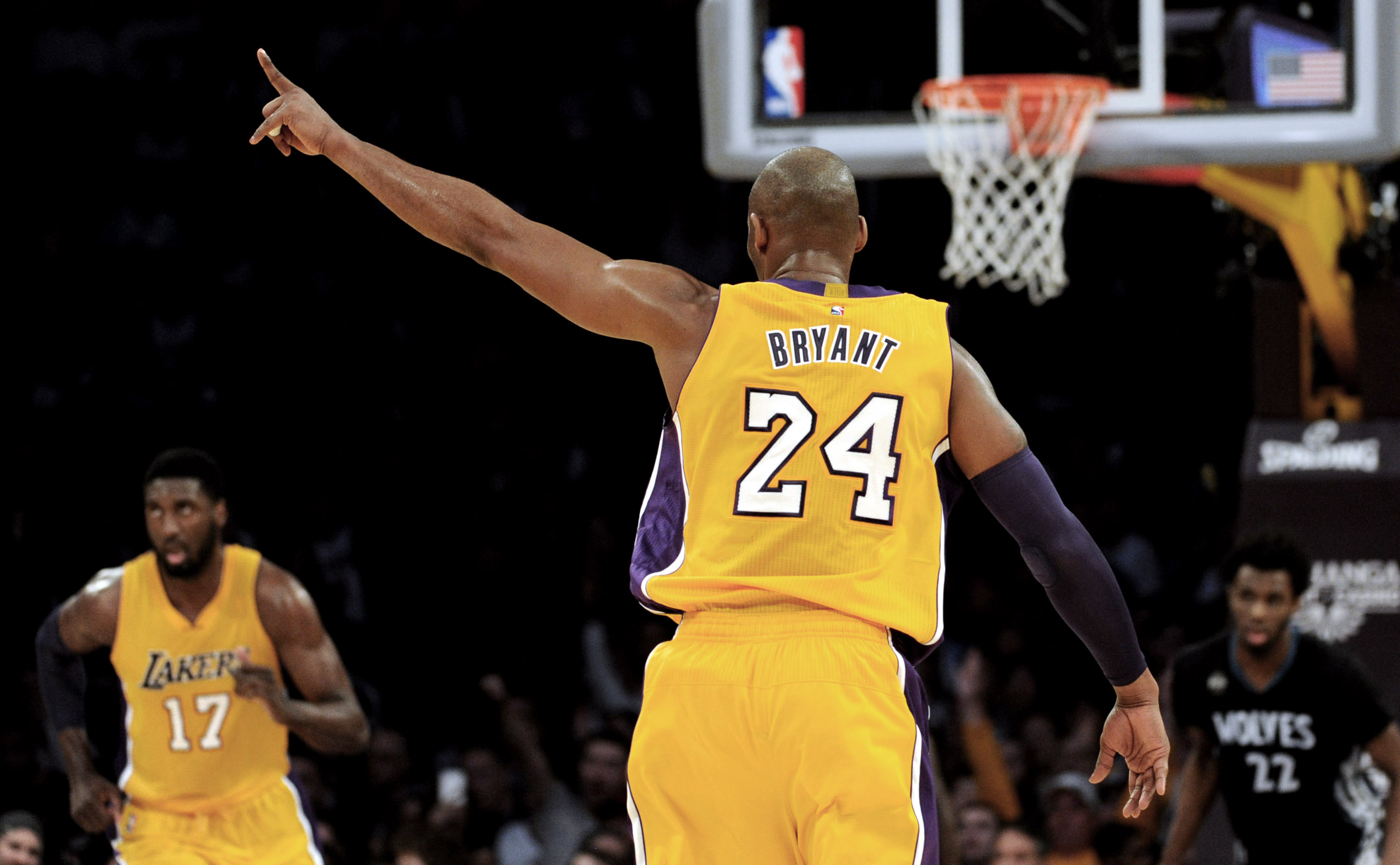 Bryant plans to play tonight when the Lakers (15-56) host the Denver Nuggets (30-42) at Staples Center, marking the third consecutive game he has played this week while nursing season-long soreness in his right shoulder. Bryant had missed two games last week as well as six of the last 10 contests. 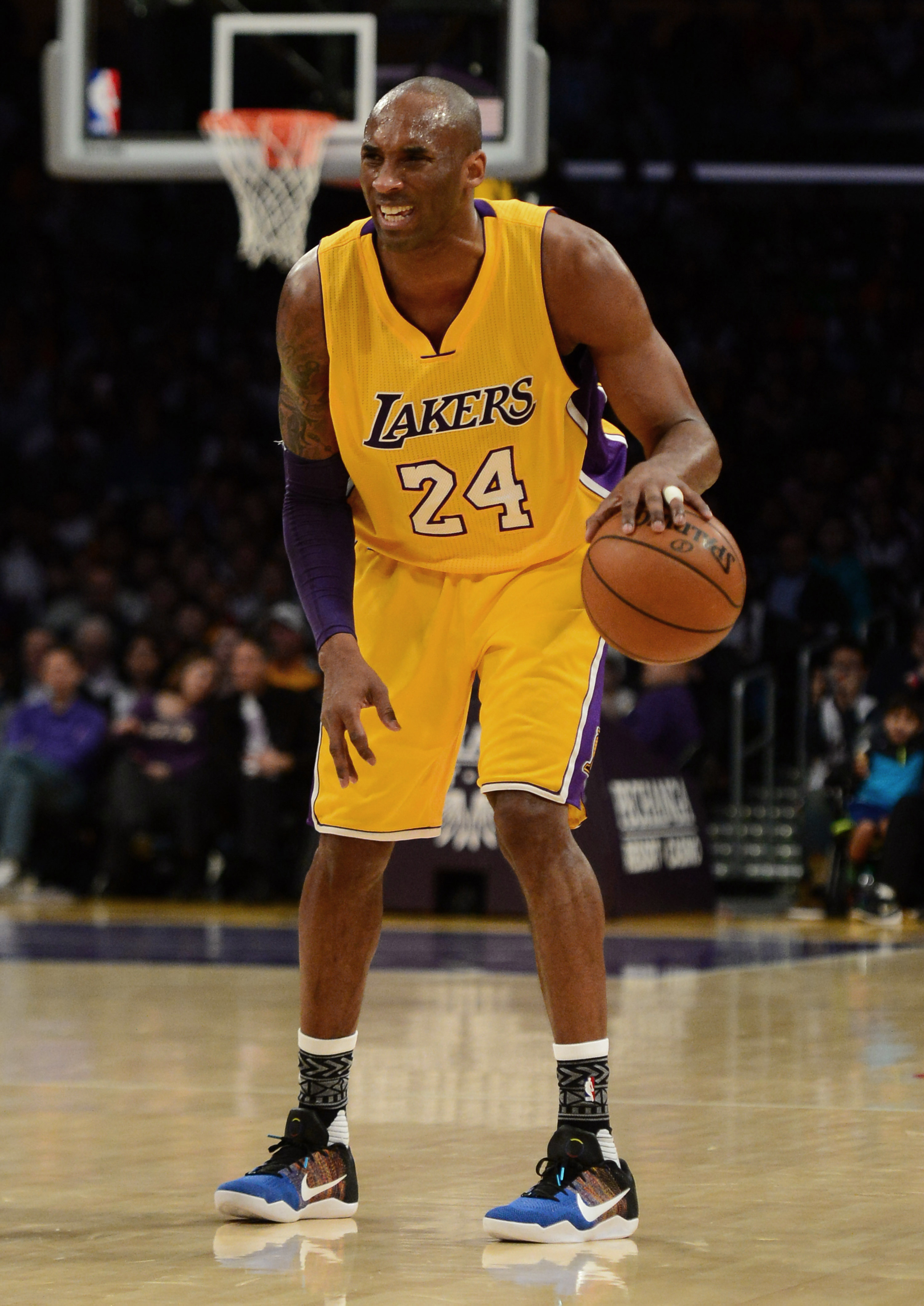 Lakers guard Kobe Bryant is considered “50-50” to play on Friday vs. the Denver Nuggets.
(Photo by Keith Birmingham/ Pasadena Star-News)

The hovering uncertainty over Kobe Bryant’s playing status has made a swift return.

After playing in back-to-back contests this week, Lakers coach Byron Scott chalked up Bryant’s odds of playing at “50-50” when the Lakers (15-56) host the Denver Nuggets (30-42) on Friday at Staples Center.

“I have no idea right now. I have to talk to him,” Scott said following morning shootaround at the Lakers’ practice facility in El Segundo. “It’ll probably be one of those things that we’ll wait all the way until gametime.”

Bryant attended Oregon’s 82-68 victory over Duke in the Sweet 16 on Thursday in Anaheim. But watching a game marks a big difference over playing in one.

Ever since announcing his pending retirement in late November, Bryant has missed only two road games while sitting out of 11 of 28 possible appearances at Staples Center. The Lakers have five home games remaining, including the season finale against the Utah Jazz on April 13.

Scott downplayed whether Bryant should play in as many home games as possible.

“He makes every effort anyway,” Scott said. “I know that shoulder is something that bothers him from time to time. He said he felt really good the other day. He could wake up this morning and be back to square one. I don’t know. Any indication of what he said the other day, that makes me feel better about him playing tonight.” 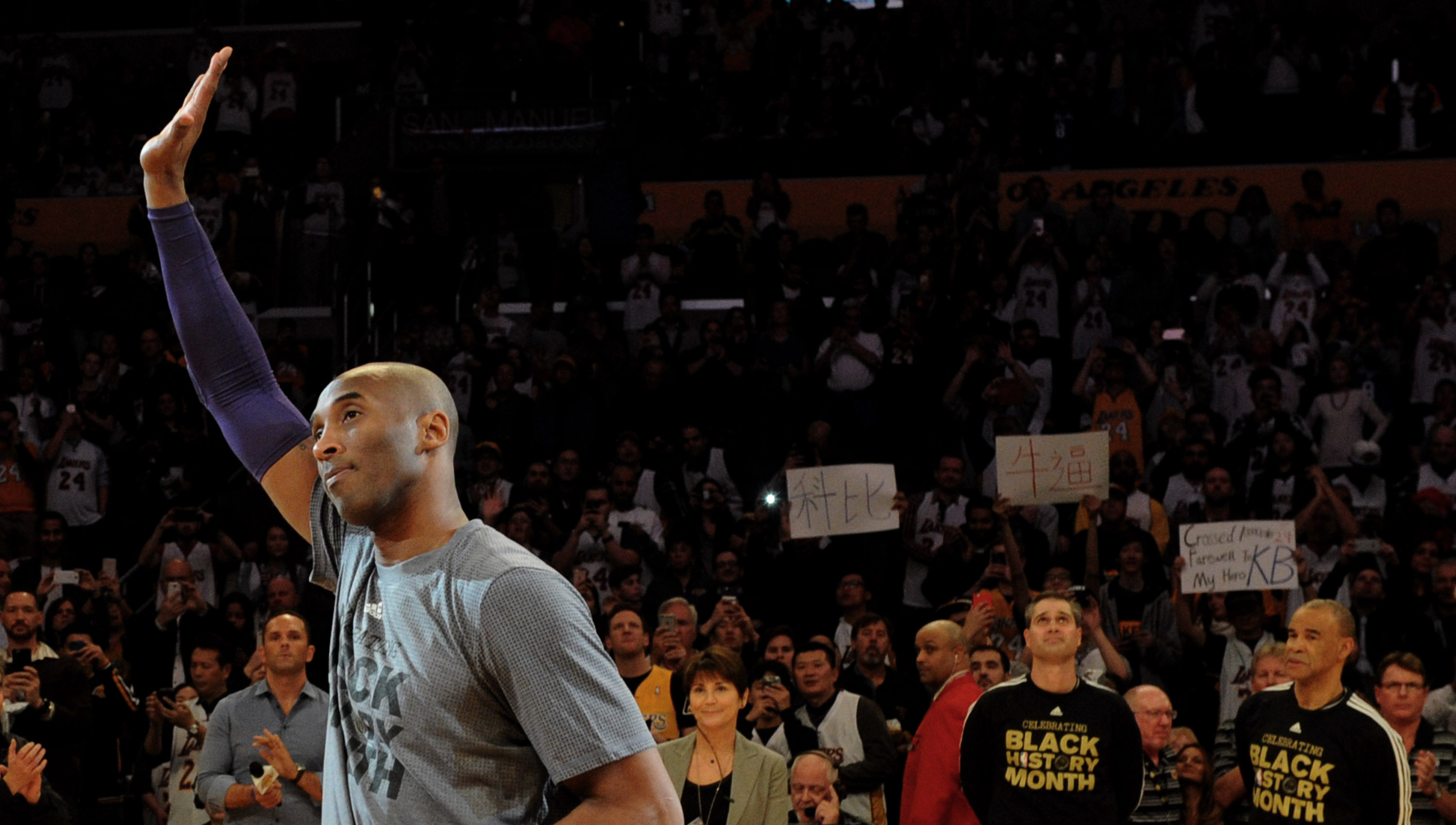 Lakers guard Kobe Bryant expressed skepticism he will watch much basketball after he retires.
(Photo by Keith Birmingham/ Pasadena Star-News)

It seemed that Kobe Bryant could never satisfy his appetite for basketball enough.

He played throughout his childhood and endlessly studied the NBA’s history. He woke up at ungodly hours to expedite his development. He watched film endlessly. He lasted 20 mostly productive NBA seasons by endlessly adding nuances to his game and training regimen.

Bryant has as many as 11 games left to play, beginning with when the Lakers (15-56) host the Denver Nuggets (30-42) on Friday at Staples Center. But will Bryant satisfy his basketball fix by remaining a student of the league? Perhaps not as much as you’d think.

“It’s difficult for me to actually watch an entire game from the start to end,” Bryant said. “The game is just too long and it’s too much time. It’s true, though.”

END_OF_DOCUMENT_TOKEN_TO_BE_REPLACED

After talking with all parties involved, the Lakers have concluded there are “different interpretations of what happened” surrounding harassment allegations that activist Alexis Jones made on both Jordan Clarkson and Nick Young.

“We support Nick and Jordan and believe what they told us about the incident and their actions,” Lakers spokesman John Black said in a statement. “We also are supportive of Alexis and her feelings about what happened, about women’s rights, and of the fine work Alexis is doing with her organization.”

Jones, an activist devoted toward women’s equality with the ProtectHer program, uploaded photos of Young and Clarkson in a car on her Instagram account. Jones then accused them of sexually harassing her and her 68-year-old mother on Sunday night in Hollywood. Black said he has “several conversations” with Jones and her publicist since then about arranging a meeting with both Clarkson and Young.

“Unfortunately, Alexis’s schedule didn’t allow for this to happen [Monday],” Black said in a statement. “We will also continue to stay in touch with her about the possibility of addressing our team about the important issues with which she’s involved.” 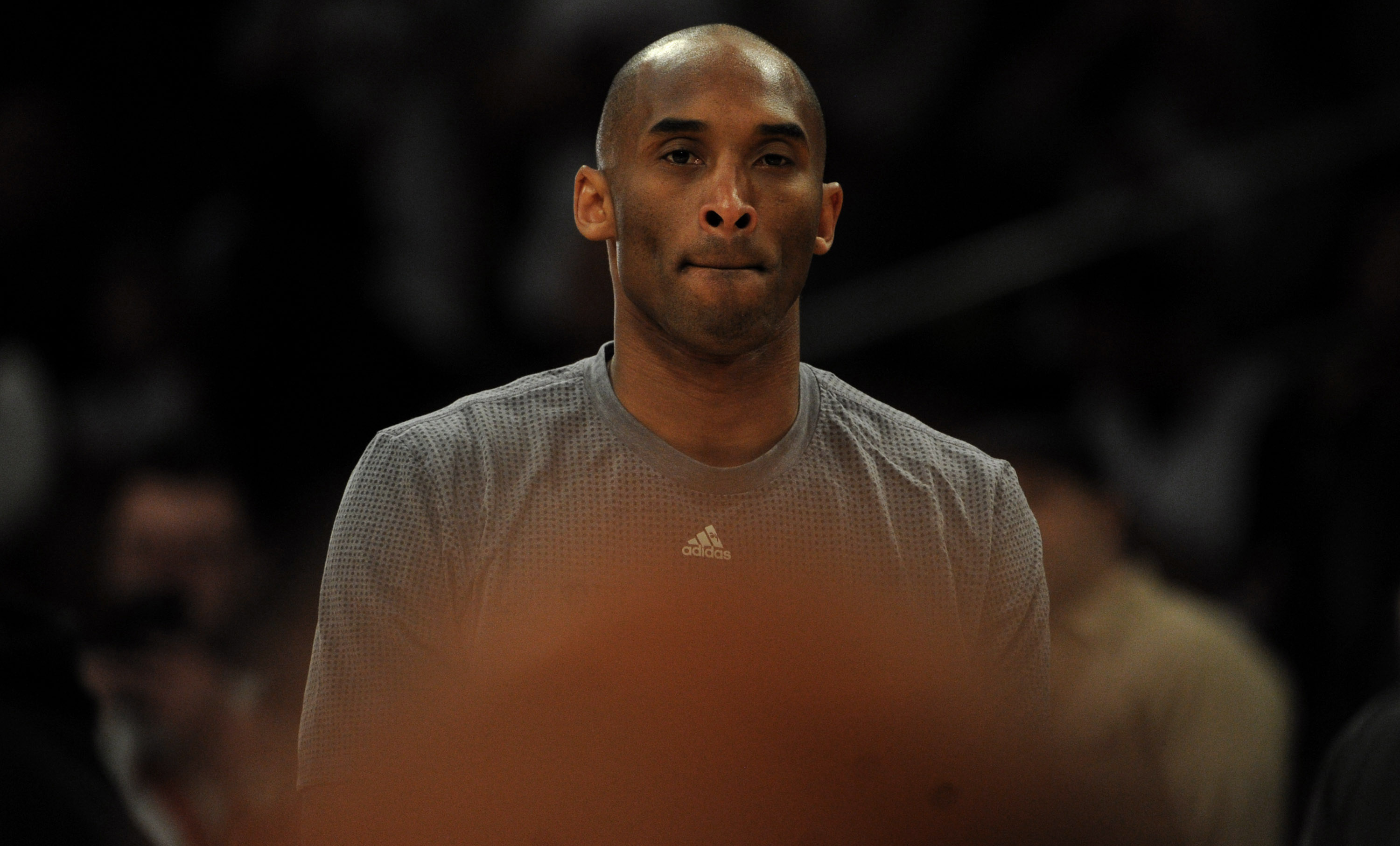 No longer did Lakers coach Byron Scott feel the need to offer odds on whether Kobe Bryant will play when the Lakers (14-55) host the Memphis Grizzlies (40-30) on Tuesday at Staples Center.

Bryant missed six of the past 10 games because of a sore right shoulder. After sitting out games last week against Sacramento (Tuesday) and Phoenix (Friday), Bryant has had about eight days to rest and recover. So much that Bryant plans to fly with the Lakers to play in Wednesday’s game against Phoenix in what will mark his final trip there.

Scott also said he “absolutely” believes Bryant will play in the Lakers’ season finale against the Utah Jazz at Staples Center on April 13.

Meanwhile, Scott will be more cautious with rookie forward Larry Nance Jr, who will miss Tuesday’s game against Memphis as part of the teams’ effort to preserve his sore right knee on back-to-backs. But Nance will be available for Wednesday’s game in Phoenix.

“I just put two numbers in a hat, I pull it,” Scott said, laughing, about how he determines which back-to-back games Nance will miss. “I pulled the number out today and it was one. That meant the first game.”

“Our organization is looking into it very seriously. It’s a very serious matter,” Scott said following morning shootaround on Tuesday at the Lakers’ facility in El Segundo. “From this point on, the team will take care of it and will figure it out and look into it and see what happens.”

Clarkson and Young did not speak to reporters at shootaround. But they are expected to be available after the Lakers (14-15) host the Memphis Grizzlies (40-30) on Tuesday at Staples Center. At the end of morning shootaround, Young talked with Lakers general manager Mitch Kupchak.

Alexis Jones, an activist devoted toward women’s equality, uploaded photos of Young and Clarkson in a car on her Instagram account. Jones then accused them of sexually harassing her and her 68-year-old mother. Lakers spokesman John Black had talked with Jones about the situation on Monday morning.

“Aye if you want some attention take a pic of me and say anything next to it and post. The world we live in,” Young said in a tweet that has since been deleted.

Various accounts close to Clarkson and Young dispute Jones’ version of events, though it’s unclear what the next course of action might be. Young has considered filing a lawsuit, according to a person familiar with his thinking.

Scott described the demeanor from Clarkson and Young as “good” when he addressed the situation with them. But Scott declined to say whether either two were apologetic.

“We live in a society today with camera phones and all this other stuff you have at your disposal,” Scott said. “Guys are at risk so you have to be careful.”

As he walks off the practice floor, Lakers center Robert Sacre often loudly brags about his squad. He often does the same thing anytime he enters the Lakers’ locker room.

No, Sacre isn’t describing the Lakers. He’s not even talking about the NFL’s Dallas Cowboys that earned that nickname. Sacre is describing his alma mater, Gonzaga, a No. 11 seed that will face tenth-seeded Syracuse in a Midwest region semifinal on Friday.

Sacre then added, “We have America behind us, so we’re good.”

Teammates and reporters often laugh and roll their eyes at Sacre’s bravado. Lakers coach Byron Scott has even become somewhat annoyed with it. After all, Gonzaga has never even reached the Final Four.

“I hope they lose the next round. I’m tired of listening to him,” Scott said. “Hopefully they’re not around much longer. If they go to the final eight or in the Final Four, we’re not going to hear the end of it.”
END_OF_DOCUMENT_TOKEN_TO_BE_REPLACED 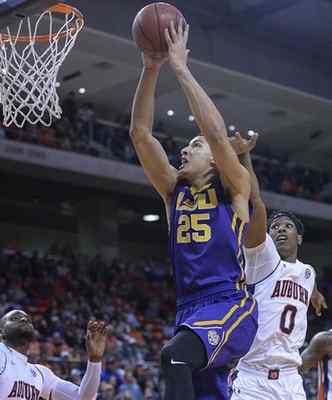 LSU freshman forward Ben Simmons is expected to be the top choice in June’s NBA draft. (Julie Bennett/AL.com via AP)

Well before LSU phenom Ben Simmons declared himself eligible for the NBA Draft on Sunday night, it seemed like a foregone conclusion the script would write itself out this way.

“Before he left high school,” said Lakers rookie point guard D’Angelo Russell, “he was going into the league.”

Russell wasn’t just speculating. The two played at Montverde Academy, a prep school down in Central Florida, before Russell starred last year at Ohio State. So even if Russell only knew his intentions to declare for the NBA draft two months left into his lone season with the Buckeyes, the Lakers’ guard still gave him some practical advice toward how he handled his own college career.

“I just told him to keep two feet in and get to the [NCAA] tournament,” Russell said. “If you make a better run in the tournament, you’ll leave a better legacy at the college level than whatever trouble he got into or whatever his talk about why he was there. It was all about the legacy.”
END_OF_DOCUMENT_TOKEN_TO_BE_REPLACED