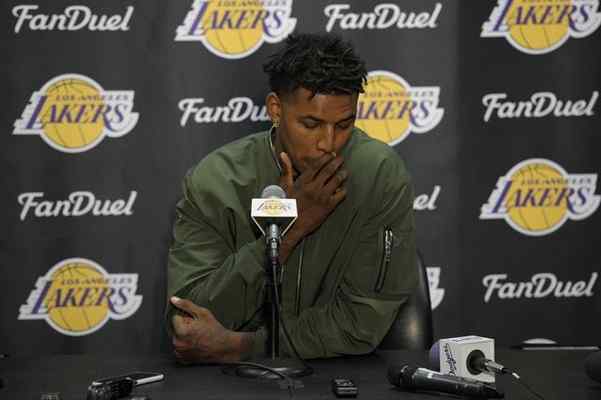 NEW ORLEANS — Lakers forward Nick Young did not travel with the team on Thursday to New Orleans, according to sources familiar with the situation.

Young plans to join the team here sometime on Friday before the Lakers (16-62) play the New Orleans Pelicans (26-52) at Smoothie King Center, sources said. But it’s not clear why Young did not fly with the Lakers on Thursday. The Lakers declined to comment on the situation.

Young has missed the past 13 games, including two the Lakers attributed to a stomach bug. Lakers coach Byron Scott also recently said that Young’s “not here with us mentally.” Lakers rookie point guard D’Angelo Russell secretly recorded a video earlier this year that was somehow leaked to a gossip website two weeks ago that showed Young admitting adultery to his fiance, Iggy Azalea.

With the incident causing issues in the Lakers’ locker room, Russell publicly apologized and expressed remorse prior to last week’s game against Miami. Russell also apologized to the team before that game.

Russell reported he has apologized to Young. But Young chose not to be present when Russell addressed his teammates about the incident prior to the Miami game. Young also has not spoken to reporters since the video became public, other than offering a brief statement that he and Russell needed to resolve the issue privately.

Young has also been on the team’s inactive roster in the past three contests and watched the games in the locker room instead of on the bench. Scott insisted earlier this week that Young’s lack of playing time had nothing to do with any lingering tension with Russell. Young has averaged 7.3 points on a career-low 33.9 percent clip.

Young has two years left on a contract worth $11.1 million. He is not expected to stay with the Lakers after the 2015-16 season, though the team’s attempts to trade him for the past two years remained unsuccessful.