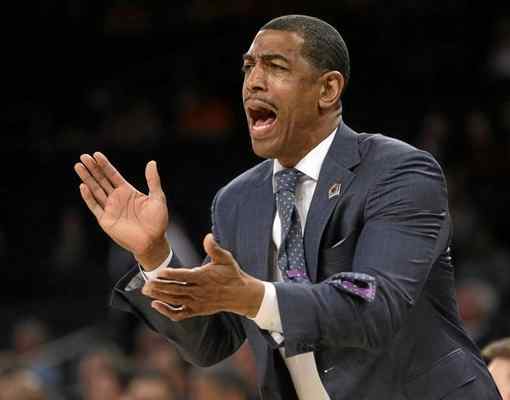 Count Connecticut coach Kevin Ollie as one of the many presumed candidates who would be interested in coaching the Lakers.

Although he has remained happy coaching the Huskies for the past four years, Ollie finds the Lakers’ head-coaching vacancy intriguing, according to a source familiar with his thinking.

Though it would be viewed as a common courtesy, the Lakers would not need to seek permission from the Huskies to interview Ollie. Unlike coaches on opposing NBA teams, no NCAA program can levy tampering charges. But some complications could emerge surrounding Ollie’s contract should the Lakers want to hire him to replace Byron Scott.

Ollie has three years left on his contract with UConn after signing a five-year extension in 2014. But with former Huskies athletic director Warde Manuel leaving for the University of Michigan earlier this season, Ollie has a clause in his contract that would allow him to leave for another team without incurring fees from a buyout, according to sources familiar with the deal. A source added, however, those terms would not go into effect until March, 2017, though the costs are believed to be relatively nominal.

The 43-year-old Ollie is an attractive option for reasons beyond winning an NCAA championship with the Huskies in 2014.

He is seen as a rising coach that could relate to and develop younge players, such as the Lakers’ core group in D’Angelo Russell, Julius Randle, Jordan Clarkson, Larry Nance Jr. and Anthony Brown. Ollie, who played his 13th and final NBA season in 2009-10 with the Oklahoma City Thunder could represent an olive branch to Kevin Durant during free agency. Ollie also has roots here, including living in South Central Los Angeles and formerly starring at Crenshaw High.