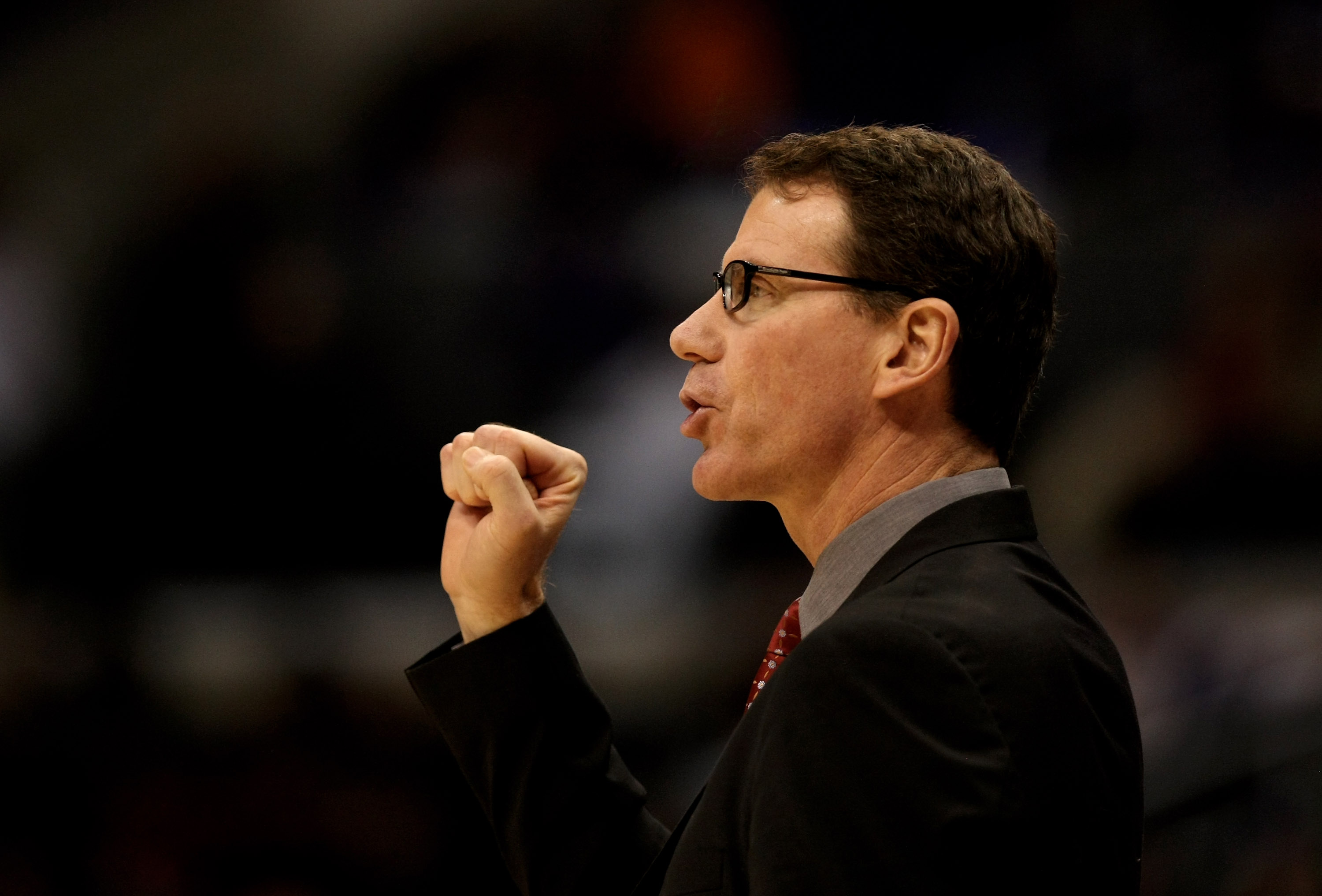 Kiki Vandeweghe, the the NBA’s senior vice president of basketball operations, does not “see anything imminent” when it comes to NBA draft lottery reform. (Photo by Stephen Dunn/Getty Images)

What do you think of the current NBA lottery system?

Vandeweghe: “The first thing is, the lottery is not supposed to incentivize losing. In theory, it’s supposed to help the teams with the worst record. That’s the whole purpose behind it. It’s been constructed in different ways and changed a variety of times over the course and adjusted as needed. But those are the two tenets to keep in mind.”

Have there been any recent league proposals to change it?

Vandeweghe:: “Nothing recently. I don’t think I see anything imminent. A year and a half ago, there was a lot of momentum for change. We brought some thoughts to the Board of Governors. The majority of the owners were in favor of change. But a change really takes a super majority. So we barely missed that. I don’t know what has happened in between that. We’ve focused on different areas. I would assume it hasn’t really changed that much.”

[Editor’s note: A super majority would require 23 out of 30 NBA teams to vote in favor of any rule changes].

What were the concerns against any changes?

Vandeweghe: “I think the people who were really focused on not wanting change were focused on what the upcoming salary cap bump can do. The salary cap is going to go to 90 [million] plus. We’ll have a lot more money in the system. How will that change behavior? How will that change team building? The draft is only one aspect of team building. You have trades and free agency. They all work together. They work together well.

We have an influx of a lot more money. We don’t know how that’s going to change the dynamic. People wanted to pause and wait and see how that affected the system. That makes sense. That’s really what’s going on. We’ll see how this works. I’m not sure anyone expected this much of a bump initially. But it’s going to be a big bump, so we’ll see.”

Were there concerns expressed about any lottery reform hurting small market teams more than large market teams? Some expressed the idea that for small markets, it’s more imperative they’re able to rebuild through the draft.

Vandeweghe: “I think the important thing to keep in mind, no matter what we’re doing with any of our rules, we always want a fair playing field as much as possible. So the cool thing that you’re noticing today, players don’t see a real difference in small markets or big markets as far as free agency goes or winning percentage. Adam [Silver] has really done a tremendous job as far as ensuring equality in the whole league. The talent is spread out. You have great teams from big markets and small markets. If you look at all of our studies, you have some of the best free agents that have chosen to stay in what would be traditionally smaller markets.”

What do you think of the ‘wheel’ concept, the latest being on the five-year or 10-year cycle?

Vandeweghe: Talk to [Boston Celtics assistant general manager & team counsel Mike Zarren] about it. He would give you the best perspective.”

I meant from the league perspective.

Vandeweghe: “I can’t really comment on any specific item, necessarily. We really really encourage ideas. We encourage ideas, especially from our teams. We solicit those ideas. We talk a lot about them and we brainstorm together with our teams. Most of the really good ideas with rule changes on the court or any place else originate with our teams or conversations with our teams where they say, ‘Have you noticed this?’ We really try to keep an active dialogue there. We like new ideas. We like exploring them. We like seeing how people feel about them.

The big key, which is something Adam has done a great job, is this concept of partnership with our teams and the players as well and really be extremely inclusive and make sure the communication is there. There’s regular communication and regular dialogue. Some sort of amount of disagreement is good. It spurs ideas. One of the big things that is important to all of us is transparency of ideas and transparency in data. It’s truly phenomenal if you think about 10 years ago or even five years ago, all the data that is now available that we share. It was never shared before.

All the reports that come out now, we admit our mistakes readily. That helps us all get better. It can cause some angst at times. But really I think overall, it’s tremendous for all of us. This is no different. We want to solicit ideas from our teams. We want to be open to new ideas and concepts. We want to spend time vetting them and doing our research. Our teams have been great in that aspect. They are great partners. They really are.”

I was told that one of the ideas the league thought of was to change the odds differently. The system would still be what it would, but you would adjust the percentages. Do you know if that’s accurate?

Vandeweghe: “That’s certainly one of the concepts we looked at, but we’ve looked at a lot of things. We’ve spent a lot of time trying to look at and digest what is the right thing to do. Again, going back to the first thing I said, which is not to incentivize teams to lose, you want to make sure that you help the teams that you’re supposed to help and make sure it works in the right way. The spirit of the rule is the important thing to keep in mind in whatever we’re doing.

Lots of times you’ll look at playing court rules. It’s up to teams in some ways to take advantage of strategies. Our teams are really innovative. When we see something that goes against the spirit of the rule, then we tend to change it. It’s been done many times over the history of the game. We’re actively trying to improve. That’s something again that Adam has been a big part of. He says, ‘Good isn’t good enough. We’ve got to always strive to make the game better on all aspects.’ We’re working hard to do that. To me, there’s no bad ideas. It doesn’t matter where the idea comes from. I’ve had plenty of teams and plenty of players and plenty of people from the media ask, ‘Have you thought about this?’ We’ll take it. If we haven’t thought about it, we’ll look at it.

This is the openness. Listen. It’s you guys, being the media, who are partners in this business, too. We’re all together. We all share this passion for basketball in some way. That ties us all together. Like family members, we may not always agree. But we all share that passion. So it brings us back to what’s really best for the game. We try to keep looking at that and we try to keep improving the product for our fans and our players on the court.

One of our biggest things is health and safety of our players. That’s huge. We changed a lot of things and keep trying to change things as new medical research comes out to make sure we’re on top of the cutting edge there. We also put in a whole new scheduling system. We’re really focused on that and in eliminating back-to-backs in four out of five nights. That’s been very positive. Players came to Adam, many of the top players, and said, ‘Hey, how about a couple of extra days after All-Star [weekend]?’ Adam said, ‘Great idea. Let’s go. Let’s do it.’ We’re focused in that area. There’s a lot of areas of real focus. It’s this idea of partnership and passion for basketball and love of the game that really makes us all get up and go to work. The players practice and play hard. We watch it and can’t wait for the next game. It’s a different atmosphere and a fun time to be working in the league. It really is.”

What other ideas have the league brainstormed on this specific issue with the draft lottery system that has jumped out to you?

Vandeweghe: “We look at a lot of different things and a lot of different versions of what we can do. It’s incumbent on us to do that as ideas come. One of the great things and big influences of basketball is analytics and looking at data-driven decisions. It’s been great for things like the [MIT] Sloan conference. Each team now has somebody or even a whole department that focuses on data and analytics. Teams are looking at stuff and generating more ideas. We have a lot of different ideas and versions on what can work. We spend time we can look at everything possibly can.”

Philadelphia has become the public face of an example of a team trying to take advantage of how the current lottery system is constructed right now. What’s your view on that?

Vandeweghe: “I think it’s fair to say there’s so many different factors that go into building a team. It’s important you design a system where good management is rewarded. You work hard and are smart about it and you’re rewarded for that. That’s what we want and that’s what we’re seeing. It goes back to your small market, big market question. That’s less relevant as compared with good management. Good management and good coaching are all part of the same thing.”

If there are any changes made to the draft lottery system, would it also have to be negotiated through the collective bargaining agreement? Or can it just rest on a super majority vote?

Vandeweghe: “It depends on what it is.”

Well, if it’s just a rule change to the system itself?

Vandeweghe: “More than likely not. But we always look at our players as partners. We want to make sure they’re aware on everything as much as possible so they’re on board.”

NBA Draft: Does the lottery need to be reformed?