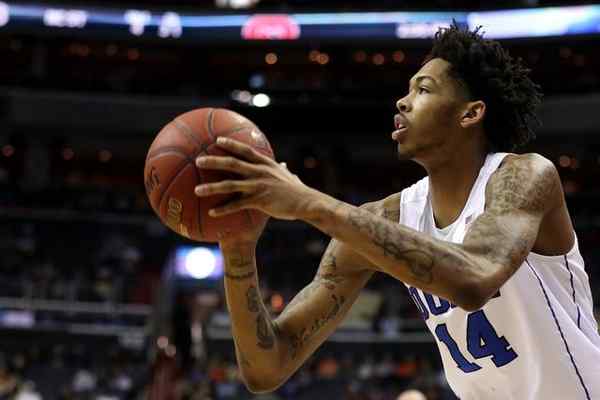 Duke forward Brandon Ingram and LSU forward Ben Simmons could square off when the Lakers play the Philadelphia 76ers in Summer League play on July 9. (Photo by Patrick Smith/Getty Images)

Hardly much debate has emerged on the draft order between LSU forward Ben Simmons and Duke forward Brandon Ingram. The Philadelphia Sixers are strongly expected to select Simmons at No. 1 because of his playmaking, while the Lakers are expected to pick Ingram because of his versatility on defense and outside shooting.

Debate will arise inevitably on which player is better. Those comparisons could begin as early as when the Lakers play their second summer league game on July 19 against the Philadelphia 76ers at 5:30 p.m. at the Thomas & Mack Center in Las Vegas, the setting where Simmons and Ingram might first square off.

The Lakers will begin their summer league slate on July 8 against the New Orleans Pelicans (7:30 p.m.) and continue on July 11 against the Golden State Warriors (7:30 p.m.). Teams will then be seeded in a tournament that starts on July 13 and ends with the championship game on July 18. But plenty of attention will circle on the Lakers’ second game. Simmons stayed at the top of most mock drafts during his lone season at LSU, yet criticism arose over the Tigers’ missed tournament appearance, his academic eligibility and his outside shooting. Ingram steadily climbed on most mock drafts after thriving with the Blue Devils as both a scorer and defender.

Plenty of intrigue will center on the rest of the Lakers’ summer league lineup. Second-year guard D’Angelo Russell, second-year forward Larry Nance Jr. and second-year forward Anthony Brown are expected to play along with the Lakers’ No. 2 and No. 32 picks. Julius Randle and Jordan Clarkson are not expected to play for two seasons. Third-year players do not typically play in summer league. Randle will play on the 2016 USA Basketball Select team later that month with Russell, while Clarkson will likely become a restricted free agent beginning in July.

All of the Lakers’ summer league games will be broadcast on both through their cable partners (Time Warner Cable SportsNet and Time Warner Cable Deports) and national outlets (ESPN, NBA TV). Fan can purchase tickets at NBATickets.com.

Buddy Hield confident he can become Lakers’ No. 2 pick