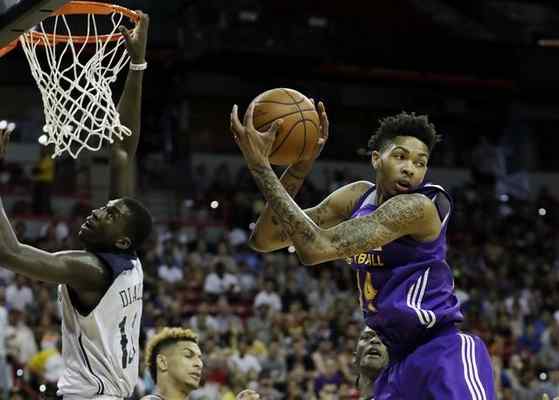 “To learn from the top players in this league,” Ingram said. “I think that’s very important for me coming into this league and trying to adjust to the physicality and pace of this game and see how they score so easily and on the defensive end how they get after it.”

After all, the No. 2 pick only described his Summer League stint as “okay,” noting he could have both improved his marksmanship, defensive impact and pace. Friday’s game marked the first time both Robertson and Ingram believe he played with enough aggression. Ingram also admitted he pushed more to certain spots on the elbow and the wings after having initial success canning his jumper.

“The biggest thing for him was understanding where shots were going to come from,” Robertson said. “It’s a new system and a new game. Just being more comfortable. He’s a physical player. He’s not of the greatest build. But he plays physical.”

So it would only seem natural that the 6-foot-9, 190-pound Ingram would consult Golden State Warriors forward Kevin Durant. After the former Seattle Supersonics drafted Durant No. 2 overall in the 2007 NBA Draft, Durant overcame concerns about his thin frame enough to become a seven-time NBA All-Star.

Ingram “absolutely” plans to seek Durant’s advice, but not for the reasons that seem obvious.

“What I learned the most is it’s not about the body type,” Ingram said. “I think it’s about your skill level and what you can do on the basketball court. If you can score the ball, I think everything becomes a lot easier for you.”

“Learning from him, he scores the ball so well,” Ingram said. “On the defensive end, he uses his length and blocks shots. I think going through this process, I want to learn from eventually all these guys.”

As he had done in Summer League, Ingram then plans to use those lessons to sharpen his craft. For a young player seemingly consumed with working hard, it only seems natural he will follow this quest when mostly everyone else is resting.