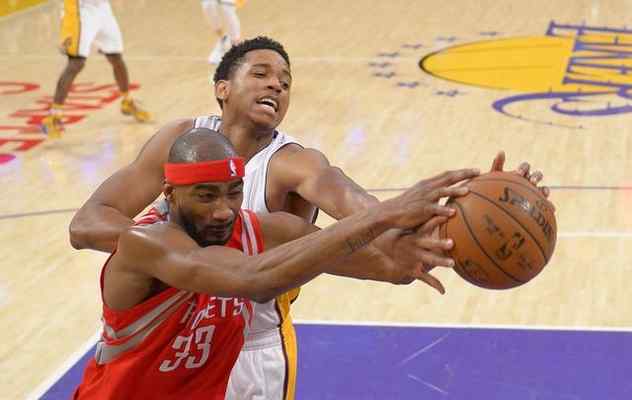 “I definitely was not happy with my offense all week,” said Lakers second-year forward Anthony Brown.

Brown said those words in a matter-of-fact tone. The stoic nature in which Brown provided his self analysis masked the inner frustration with two things.

He had airballed a potential game-tying 3-pointer that could have forced overtime in the Lakers’ 92-88 loss to the Utah Jazz in the summer-league consolation round on Friday at Staples Center. Brown also averaged seven points on 36.1 percent shooting in 21.8 minutes through five Summer League games. Even with increased playing time against inferior competition, Brown only posted modest increases after spending last season averaging four points on 31 percent shooting in 20.7 minutes per game through 29 appearances.

Brown still offered some solace in the Lakers’ summer-league finale against Utah There, Brown posted 15 points on 5-of-13 shooting and 3-of-5 from 3-point range. Lakers summer league coach Theo Robertson praised Brown for becoming more aggressive. With Russell resting, the Lakers set Brown up for looks as he moved both off the ball or off of pindowns. Brown held out optimism that marked “a step toward where I want to get to.”

“Hopefully that gives him confidence,” Robertson said, “heading into the rest of the summer.”

Can Brown achieve that?

The Lakers drafted Brown with the No. 34 pick in the 2015 NBA draft after shooting 41.1 percent from 3-point range his previous two seasons at Stanford. Brown struggled carrying that over to the NBA. So much that former Lakers coach Byron Scott rarely granted Brown opportunities despite health concerns surrounding Kobe Bryant and consistency issues surrounding Nick Young and Metta World Peace. Brown entered the rotation in late February only to miss the final 19 games because of a stress reaction to his right foot.

Brown has since fully healed from his injury. Yet, he felt uncomfortable the first two summer league contests because those appearances marked the first time he had played in an organized game since the injury. Meanwhile, the Lakers drafted Ingram and acquired free agent Luol Deng, two players that could eat Brown’s minutes. Meanwhile, Lakers general manager Mitch Kupchak described Brown as a “development player.”

Both the Lakers and Brown like his defensive versatility enough. So much that Brown called himself the summer-league team’s “best defender.” Yet, Brown outlined something very specific on what will dictate his playing time.

Brown added those shooting sessions will not entail any major changes to his mechanics. Instead, Brown will rely on repetition in hopes he can start “getting back to how I used to shoot.” Then, perhaps Brown can become part of the positive energy that has lifted the rest of the Lakers’ young core.