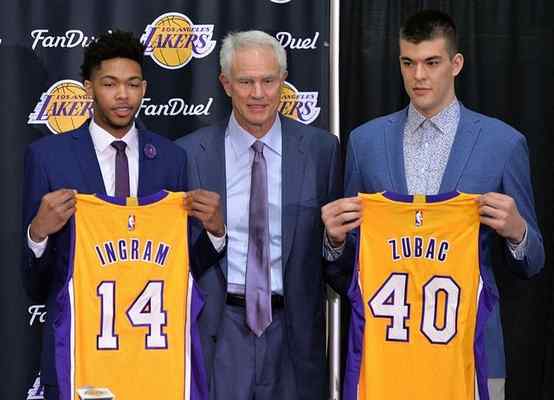 Lakers assistant coach Theo Robertson did not anticipate Zubac successfully overcoming any language barriers so quickly. Yet, Zubac speaks fine English with a noticeable accent. Zubac has mused the only adjustment entailed struggling to pick out cereal amid the wide litany of options.

“None of that was an issue for him,” Robertson said of any communication issues. “He was able to plug right in, got along with his teammates well and he understood what we were trying to do.”

Nor could Robertson predict Zubac’s quick comfort level in adapting to the NBA game. Although Zubac conceded an adjustment toward the increased floor spacing, the Lakers became intrigued with the 7-foot-1, 240-pound Zubac showing a blend of physical power and a dependable jump shot.

“He establishes good position and he has soft hands. He can do a variety of things, whether it’s popping out to the short corner and hitting those type of jumpshots,” Robertson said. “He has good touch around the rim. He’s starting to finish with more power and starting to understand the level of physicality that it takes to be successful in this league.”

None of those qualities raised Brown’s eye brows much. He remarked that “most Euro bigs are skilled.” Yet, Brown often shook his head in amazement when he saw Zubac both make defensive rotations and swat away shots with ease.

“I didn’t know he was that good defensively,” Brown said of Zubac. “He’s pretty agile and he’s blocking everything down there. That’s the biggest thing. Defensively, he’s better than I thought.”

All of which fulfills Zubac’s lifelong fantasy.

The Bosnian-born center grew up a Lakers fan, so much that he shared he has owned Kobe Bryant, Pau Gasol and even Andrew Bynum jerseys. Zubac watched Bryant’s 60-point performance in his final game three months ago at 4 a.m. in his native country despite needing to report to practice at 10 a.m. Hence, it seemed fitting Zubac’s friends and family members showed the same unwavering support toward seeing how he will fare in a Lakers uniform.

“My friends and everybody is watching and everybody is so proud of me,” Zubac said. “I want to use this opportunity to thank them a lot. I appreciate that a lot. I hope they’re going to continue to support me like this.”

Zubac will likely hear more support when he returns to his native Croatia this week.

He predicted, “definitely it’s going to be a surprise” on any planned celebrations. Those parties will not last long, though. He will return to Los Angeles after next week where he will spend the rest of his offseason lifting weights and improving his mid-range jumper.

Despite seemingly living in a fantasy world that entails playing for his favorite team, Zubac has stayed in reality. So even if he became one of the Lakers’ feel-good stories in summer-league play, Zubac sounds determined to ensure his current dream only marks the beginning. As Lakers rookie forward Brandon Ingram said, “He really has a chance to become a great player.”

Vocal Lakers fans in Los Angeles and attentive close ones in Croatia will watch earnestly, eager to see how much the Lakers’ seemingly successful gamble in Zubac could spark more earnings.

“Now I have a lot of confidence. I know I can play,” Zubac said. “This is summer league. It’s nothing yet. But it gives me confidence I can play against these players.”