LAS VEGAS — The crowd roared into a frenzy as they saw how those long and outstretched arms performed something magical.

Lakers fans may have never heard of the 7-foot-1, 240-pound rookie center until the Lakers drafted him No. 32 overall nearly two weeks ago. But it did not take long for them to fall in love with him during the Lakers’ 85-65 victory over the New Orleans Pelicans in Summer League play on Friday at the Thomas & Mack Center. So much that as Zubac collected 11 points on 3-of-4 shooting, five rebounds and three blocks, several of the fans chanted “Zu Block.”

Apparently, that is a nickname Zubac both endorsed and already had.

“My old teammates gave me that nickname,” Zubac said. “When I separated ways from them, that nickname was forgotten.”

Still, it wasn’t clear if Zubac said “Zu Block” or “Zu Blocka.” Either way, more clarity on his nickname could emerge when the Lakers play against the Philadelphia 76ers on Saturday at Thomas & Mack Center.

“A big fella with some sweetness to him,” Russell clarified. “He’s really good. I don’t think people know how good he is yet.”

END_OF_DOCUMENT_TOKEN_TO_BE_REPLACED 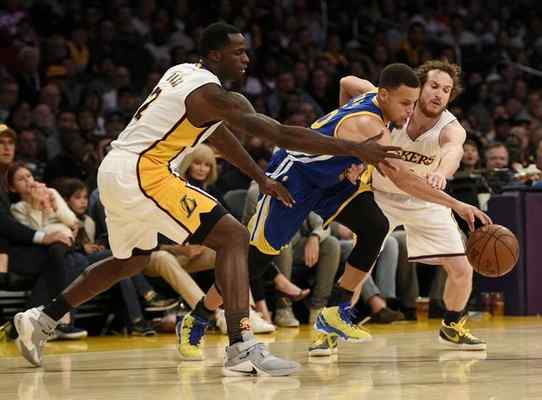 The Lakers made another move by adding more backcourt depth. Reserve guard Marcelo Huertas revealed on his Instagram account that he has agreed to return to the Lakers on a two-year deal

“Purple and gold for 2 more years!” Huertas said. “Couldn’t be happier to stay with this organization and people that have welcomed me so well last season! Looking forward to it!”

It is not immediately clear what the terms of Huertas’ contract entail. The Lakers did not confirm the deal. But Huertas’ presumed return will entail competing with reserve guard Jose Calderon for minutes behind second-year guard D’Angelo Russell. The Lakers acquired Calderon from Chicago on Wednesday.

The 33-year-old Huertas played in his first NBA season in the 2015-16 season after having a 14-year career in South America and Europe. Huertas averaged 4.5 points and 3.4 assists, and often received praise for running a team-oriented offense and his hustle.

The Lakers had hoped the fireworks would blow up anytime after Nick Young went on a scoring outburst.

But after spending the past two seasons launching plenty of duds, Young set off his own fireworks with an ending that would hardly leave anyone celebrating. As first reported and shown in the video above by TMZ, Young picked up a lit firework during a party on the 4th of July holiday only for it to blow up in his face.

Young did not get hurt. The Lakers also do not plan to hurt him with any disciplinary action after putting himself in physical danger.

“You would hope that things like that don’t happen,” Lakers coach Luke Walton said after summer league practice on Tuesday at the team’s practice facility in El Segundo. “Professional athletes kind of need their hands. But I’m glad he’s okay.”
END_OF_DOCUMENT_TOKEN_TO_BE_REPLACED 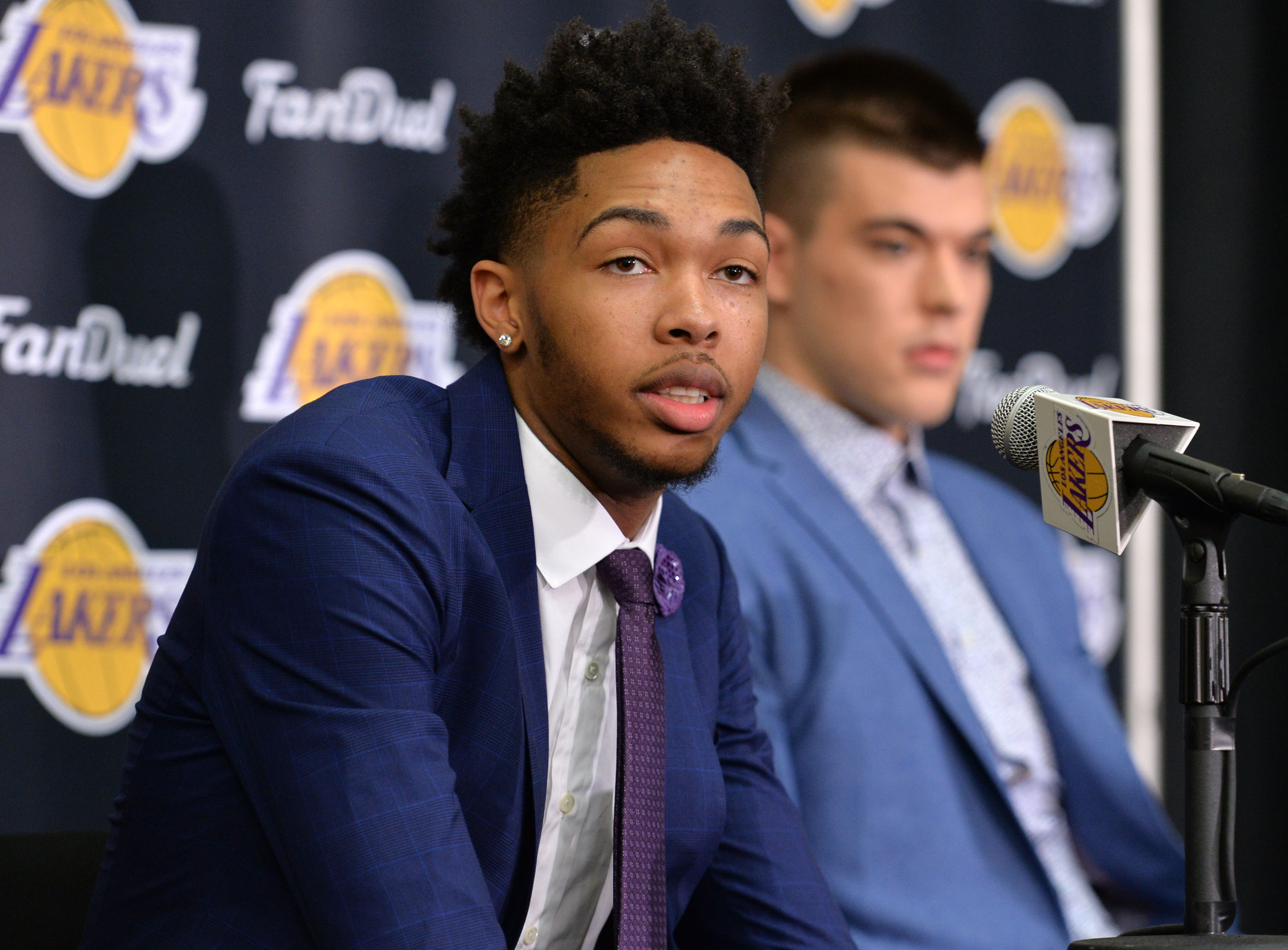 The expectations for Brandon Ingram seemingly increase by the day.

The Lakers drafted him with their No. 2 pick. Ingram’s versatility, long wingspan and rail-thin frame elicited comparisons to Kevin Durant. And Ingram learned on Tuesday that he will have Kobe Bryant’s vacated locker at the Lakers’ practice facility.

But that does not necessarily secure Ingram as the Lakers’ definitive starter at small forward. The Lakers agreed to a four-year, $72 million with 12-year NBA veteran forward Luol Deng, who could assume that same position.

All of which prompted one question. Does it matter to Ingram if he starts or not?

“Of course, from my competitive side,” Ingram said on Tuesday at the Lakers’ introductory press conference. “But if I have to be a reserve, I’ll be coachable enough to do whatever the coach tells me to do.”

Lakers coach Luke Walton has said he considered Ingram the top choice after winning the ACC’s Freshman of the Year award during his lone season at Duke. Walton also has praised Ingram’s defense, outside shooting and ability to play multiple positions.

That also explains why the Lakers pursued Deng, who has averaged 15.5 points, 6.2 rebounds and 2.4 assists in his 12-year NBA career with stints with the Chicago Bulls (2004-14), Cleveland Cavaliers (2014) and Miami Heat (2014-16). Deng also has cemented a league-wide reputation as a positive locker room influence and willing mentor. It also seems natural Ingram and Deng could hit it off after both starring at Duke. 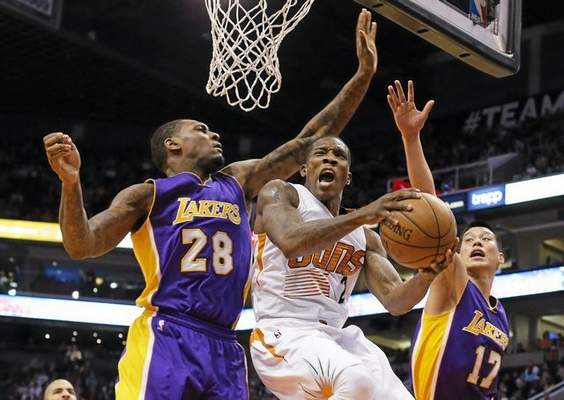 The Lakers do not want to distance themselves entirely from a team that finished with the worst record in the franchise’s history.

The Lakers agreed to retain backup forward/center Tarik Black on a two-year deal worth $12.85 million, according to The Vertical. Black appeared to confirm the news by posting the tweet below of a Lakers hat.

END_OF_DOCUMENT_TOKEN_TO_BE_REPLACED

The Lakers landed an established veteran that could inject both talent and leadership to complement their young roster.

The Lakers and Luol Deng agreed to a four-year, $72 million deal, according to league sources. Deng had extensive conversations with other NBA teams, including the Washington Wizards and Utah Jazz. Deng also had a meeting with the Jazz on Friday, sources said.

The Lakers did not establish whether Deng would be a starter or a reserve. But he is expected to play a significant role after averaging 15.5 points, 6.2 rebounds and 2.4 assists in his 12-year NBA career with stints with the Chicago Bulls (2004-14), Cleveland Cavaliers (2014) and Miami Heat (2014-16). Deng has cemented a strong reputation around the NBA as both a versatile forward and positive locker room influence.

@LuolDeng9 Congrts my brother. Now you can afford your own @stance socks..One of my all time favorite teammates. Proud to call you a friend!

END_OF_DOCUMENT_TOKEN_TO_BE_REPLACED

New Orleans power forward Ryan Anderson left the Beverly Wilshire on Friday afternoon after having a meeting with the Toronto Raptors. The location seemed fitting considering the Lakers are interested in Anderson, too.

Last season, Anderson averaged 16.5 points off the bench (ranked second among reserves) and made 36.6 percent of his 3-point attempts. The 6-foot-10 Anderson would also give the Lakers added versatility to take advantage of the modern NBA that Lakers coach Luke Walton hopes to implement from his time with the Golden State Warriors.

Anderson will likely command a max contract after making $17 million last season. Although the Lakers have enough money to sign two max players, it is not currently clear how much they would pay Anderson. Should Anderson land with the Lakers, it would become an easy transition considering he recently bought a house in Hermosa Beach, sources said.

Why Kevin Durant spurning the Lakers is good for L.A. 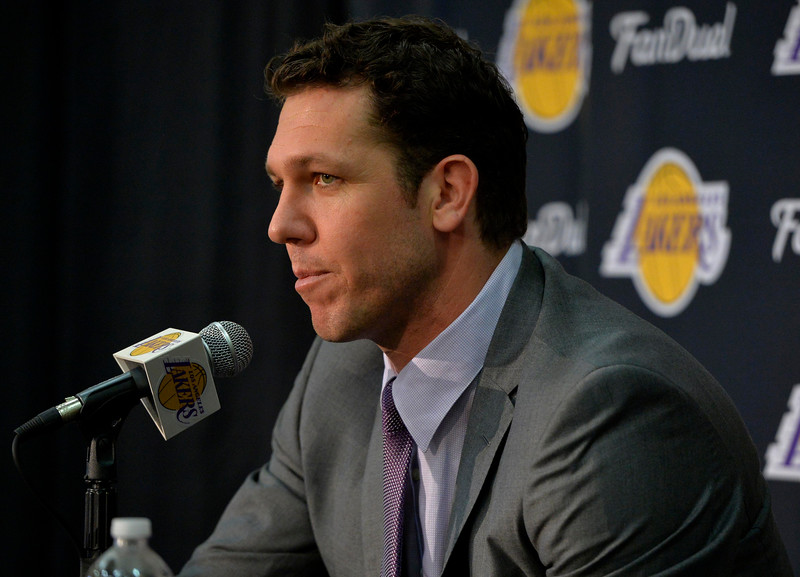 Lakers coach Luke Walton has already become acclimated with his new position just over one week into the job. 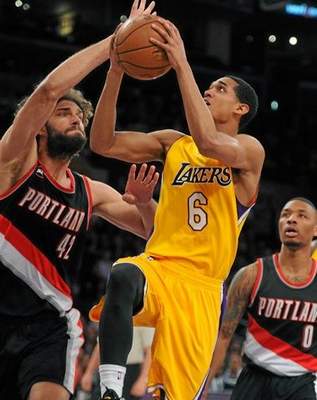 The Lakers may have struck out on landing a marquee free agent. But they managed to keep one of their rising stars from leaving.

The Lakers and second-year guard Jordan Clarkson agreed to a four-year deal worth $50 million, according to league sources. The deal cannot be signed until the NBA moratorium ends on July 7.
END_OF_DOCUMENT_TOKEN_TO_BE_REPLACED