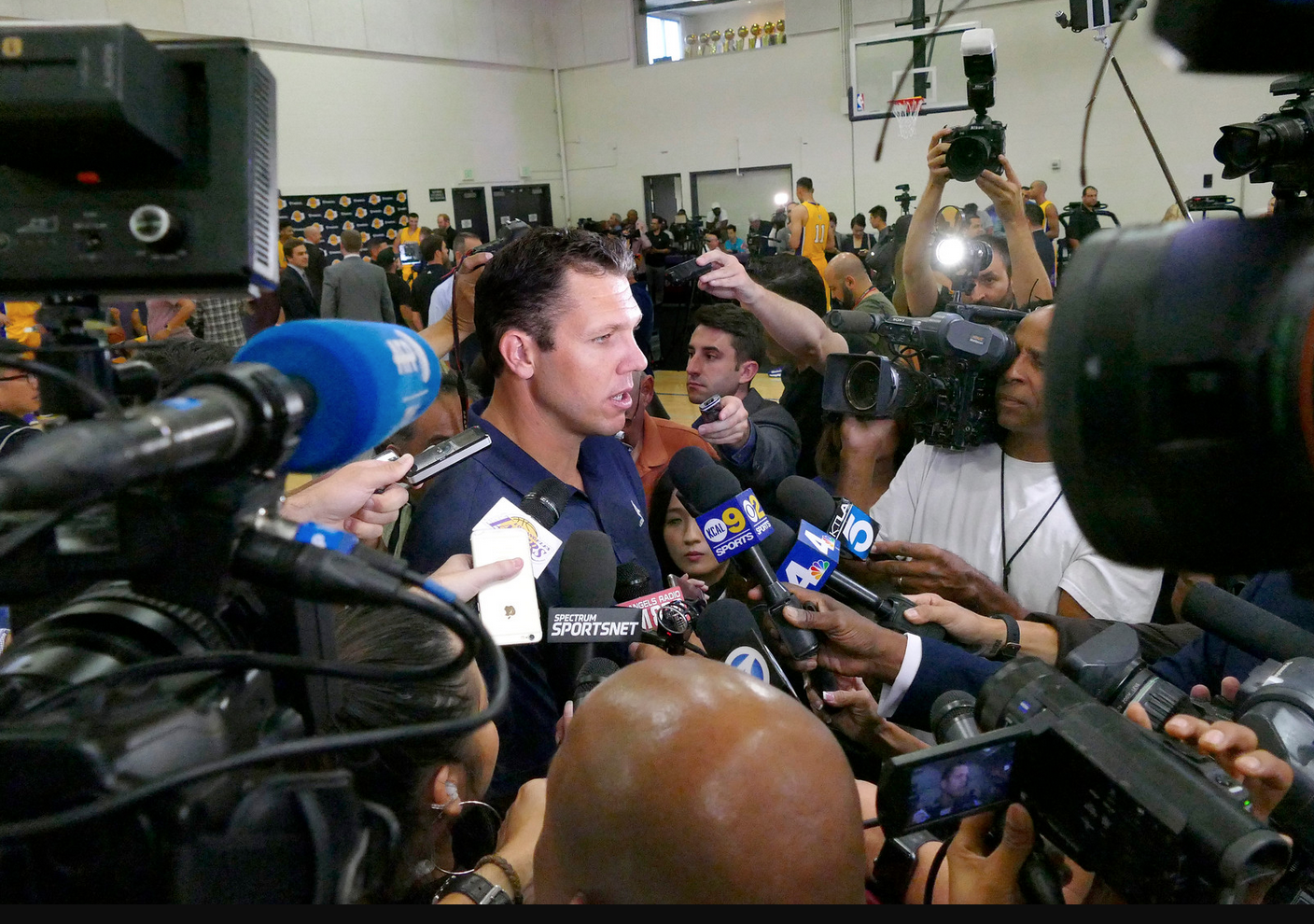 As the players all huddled together, Lakers coach Luke Walton and general manager Mitch Kupchak addressed the team with a specific message. It went beyond any expected platitudes surrounding the 2016-17 season. It also surrounded the wave of various national anthem protests spearheaded by various NFL teams, which Walton called “a very serious and important issue.”

“It’s a very big subject because it’s touchy for both sides. But to me, it’s about what kind of change can we make,” Walton said. “That comes with getting together with organization in action and in the community and giving time and money to whatever else we can to help this problem get fixed.”

So, the Lakers talked for about 30 minutes before media day began on Monday at the Lakers’ practice facility to brainstorm various ideas.

Lakers forward Larry Nance Jr. said some talked about several possibly locking arms during the anthem. Other players sounded open toward both continued dialogue and civic engagement surrounding police brutality against unarmed black men as well as improving relationships with law enforcement. Nance also said Walton and Kupchak stressed one message: “Whatever you decide, we’re behind you.”

“The league and the Players Association, working together, have begun developing substantive ways for us to come together and take meaningful action,” the letter said. “These ideas are based on the actions many of you have already taken or supported, including convening community conversations in NBA markets to engage young people, parents, community leaders and law enforcement in a candid dialogue; using our game to bring people together and build bonds of trust in our communities; and supporting mentoring and career development programs that help bring economic opportunity to people of color. As we begin to move forward with these programs, it is really important that we hear from you. We will be working with your teams during training camp to get your thoughts and ideas.”

As far as what those ideas could entail, the Lakers did not articulate anything specific. But they sounded open to initiate the discussions.

Carmelo Anthony, Chris Paul, Dwyane Wade and LeBron James tried to do that this summer by out at the ESPY awards about various shootings this year involving law enforcement and black men. Anthony also hosted a forum in Los Angeles that included local politicians, police officers and civic leaders speaking about the issue.

“Something needs to be done. This country is too great to have happening what keeps happening,” Walton said. “What that is, we’ll decide as a group and we’ll continue talking about what we can do. I think most importantly is what we get behind as an organization and individually as a team.”

Hence, some Lakers players sounded reluctant on talking specifically about the issue.

Lakers guard D’Angelo Russell admitted he’s “not as educated as I want to be on the subject.” Several Lakers players, including Randle, Metta World Peace and Tarik Black declined to discuss San Francisco quarterback Colin Kaepernick sitting and subsequently taking a knee during the national anthem. Lakers guard Nick Young reported he has witnessed law enforcement “first hand” as a Los Angeles native, though a team official interrupted the end of his session before he could share more specifics.

“It takes a lot of courage to stand up for something. Everybody has the right to do however they feel,” Lakers forward Luol Deng said. “They are exercising their rights. For everybody and individually, everybody should have the right how they feel whether through their words or through their action. After that, it’s up to everyone else to judge them on how they want to judge. It’s a free world and everybody has the right to stand up to the things they think are right.”

Though the NFL does not strictly specify player protocol during the anthem, the NBA rule book says that “players, coaches and trainers are to stand up and line up in a dignified posture along the sidelines or on the foul line during the playing of the national anthem.”

Yet, several of the Lakers put more focus on the issue itself than the anthem.

“This is happening in the United States. But if you look all over the world, there’s me being from a country that has civil war for so many years,” said Deng, who grew up in South Sudan. “It’s not about if you don’t like what somebody is doing. It’s about why are they doing it? Solving that issue will get people somewhere in the long run. The point of protesting and showing your action is you want to something to change. That’s what people should look at.”

And as the Lakers look at it, they sound both determined on two things. They want to stay open-minded. They also want to remain collaborative and unified.

“It’s not one or two specific individuals that feel differently about it and want to go their way about it and take the criticism, whatever it is,” Russell said. “We want to come together as the Lakers and make a decision. We’re in that process now.”

Questions abound as Lakers prepare for life after Kobe Bryant

Metta World Peace to return to Lakers for training camp