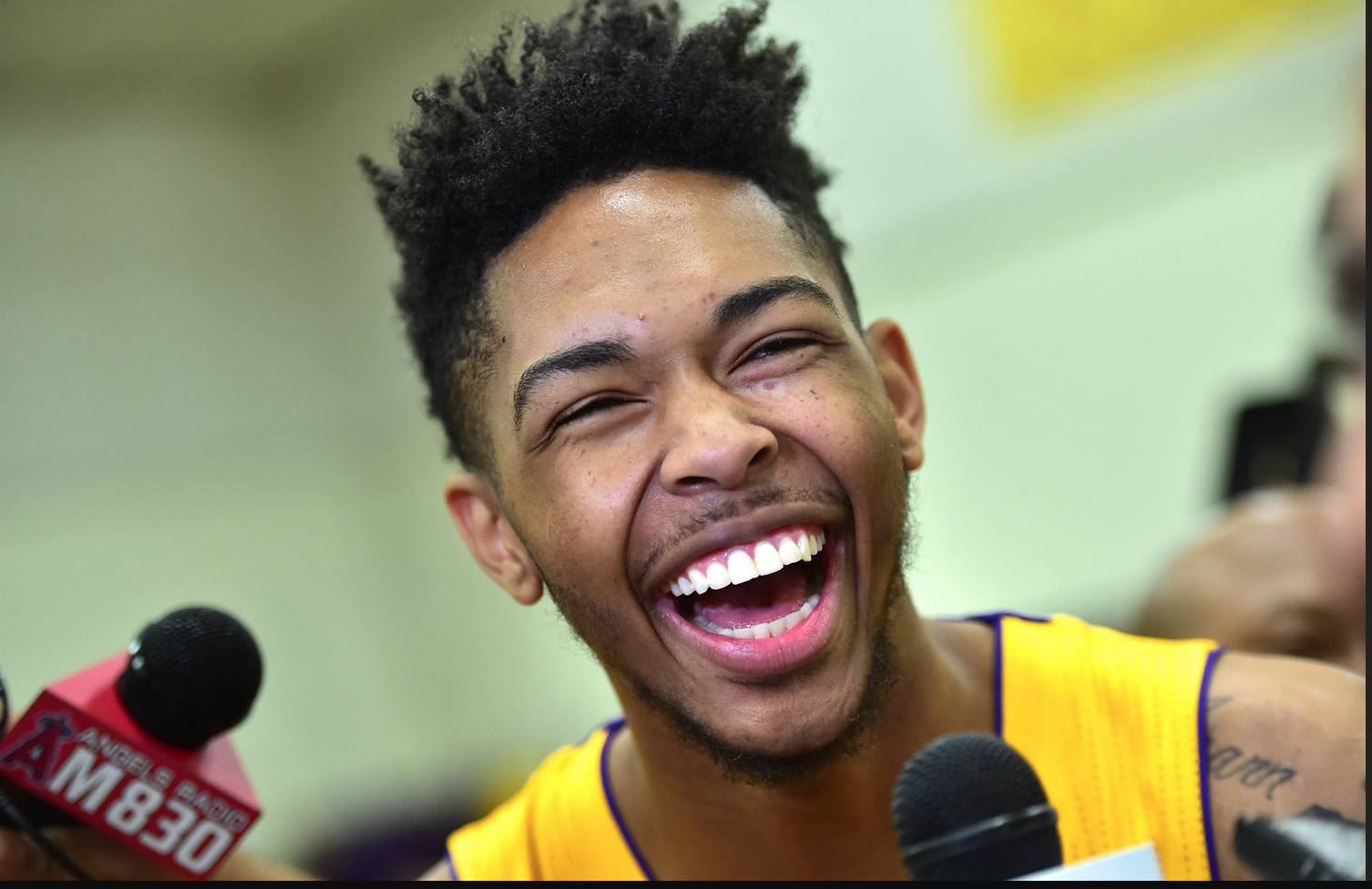 EL SEGUNDO — His presence represented the main consolation prize the Lakers received for finishing last season with their worst record in franchise history. His work ethic, versatility and wingspan could all play a large part in bolstering the Lakers’ otherwise non-existent defense in recent years. With the Lakers no longer featuring a star that both dominated the scoring column and the limelight, his arrival could represent the Lakers’ new face in their franchise.

Yet as Lakers forward Brandon Ingram begins his rookie season, there are many clear signs the team has not exactly greeted its No. 2 draft pick as a savoir.

Lakers veteran forward Lou Williams quickly informed Ingram would perform rookie duties for him. Lakers veteran forward Nick Young instructed Ingram to address him as “Uncle P.” And in an issue that offers far more substance, Lakers coach Luke Walton made it clear he does not envision starting Ingram right away.

All of which sounds as pleasant to Ingram as the music Walton will allow his team to play during practice.

Ingram has shown off that motivation in various ways.

He may be currently listed at 6-foot-9 at 190 pounds. But the ultra lean Ingram reported gaining an unspecified amount of weight in muscle. He has both increased his caloric intake in food and has collaborated with Lakers strength and conditioning coach Tim DiFrancesco on bulking up in the weight room.

“People expect for your frame to change a little bit. But it takes time,” the 19-year-old Ingram said. “I’m trying to get stronger. I’m not a lot about gaining weight by packing on food. I’m just trying to get a little stronger each and every day. I have to wait for my body to mature.”

Ingram has embraced the role Walton has outlined for him. With the Lakers fielding dominant ball handlers, including D’Angelo Russell, Jordan Clarkson and Julius Randle, Ingram appears unlikely he will have the ball in his hand that often. He also likely will not score as much as when he averaged 16.3 points per game during his freshman season at Duke, marks that both contributed to the ACC’s Freshman of the Year award.

Although Walton still praised Ingram’s aggressiveness at the rim and athleticism during Summer League play, Ingram sounded mindful of the danger to compare that play to the NBA regular season. He also has a litany of items to correct after averaging 11.8 points on 37.7 percent shooting, 3.5 turnovers and 3.2 assists in five Summer League games.

“You have to look back and look at the big picture knowing that I haven’t arrived and knowing I have to keep working hard to be the best player I can be,” Ingram said. “I’m going into training camp working hard and establishing what I need to work on and get better at it.”

Ingram has also entered training camp already listening to the advice his experienced and young teammates have provided.

After fielding an adversity-filled rookie season filled with evolving roles and maturity issues off and on the court, Russell told Ingram “to be myself” and “to work hard each and every day.”

“Adversity will set in, whether you’re playing horrible or playing well,” Russell said. “Once you get through everything, it will be easy.”

Instead of seeing 12-year NBA veteran Luol Deng as his road block into the starting lineup, Ingram asked Deng for some tips on how to successfully navigate an 82-game season. Walton considered that issue the main reason for not starting Ingram, who played 35 games during his lone season at Duke.

“Brandon’s got so much room to grow. But he’s already so much ahead of his age group,” Deng said. “The NBA game will come to him. He’s that talented. He’s going to keep getting better every year. The good thing about him is he’s very humble and he works very hard.”

All of which Ingram hopes will lead toward winning the NBA’s rookie of the year award.

“I would be lying if I said it wasn’t” [a goal], Ingram said. “I’m going to work extremely hard to get that.”

The NBA will see how other first round prospects perform, namely Philadelphia forward and coveted No. 1 pick Ben Simmons. Before he can earn full respect for his on-court talents, Ingram plans to earn his teammates’ respect by accommodating rookie duties. So far, Ingram has done nothing more than carry bags at Summer League. But more responsibilities await.

“I don’t know yet. But I know it’ll be something crazy,” Ingram said, laughing. “It used to be way worse.”

Moments earlier, Ingram only needed to look at his newly adorned No. 14 Lakers jersey to explain why he has remained humble with both his upcoming chores and likely bench role.

“To have this on is a dream come true,” Ingram said. “I want to make the best of it.”

Lakers keeping open mind on how to protest amid social unrest