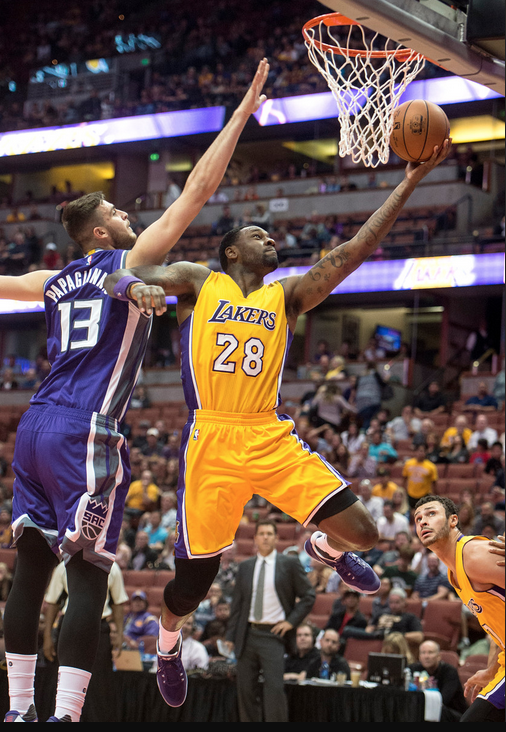 Lakers’ Tarik Black, right, goes for a basket past the Kings’ George Papagiannis during a preseason game at Honda Center on Tuesday, Oct. 4, 2016. (Photo by Kyusung Gong, Orange County Register/SCNG)

ANAHEIM — The big man threw down a dunk with thunderous force.

On the surface, the play could have just revealed Tarik Black’s bruising strength with his listed 6-foot-9, 250-pound frame. But symbolically it could have represented Black finally unleashing his power that often went unused in a previously frustrating season.

But instead of sitting on the bench, Black played a large part in securing the Lakers’ 103-84 victory over the Sacramento Kings in their preseason opener on Tuesday at Honda Center. Black represented a second unit that chipped away at a 13-point deficit in the second half. He posted 15 points on 5-of-5 shooting and five rebounds. And even if it’s necessary to consider the Kings mostly rested their starters, Black validated something he felt all along as he mostly sat on the bench last season.

“I’ve always had faith in myself and knew I could play, even when I did get opportunities last season, I did positive things,” Black said. “I just didn’t have the opportunities.”

Black didn’t get those opportunities because former Lakers coach Byron Scott belief he lacked consistency with both his hustle and mid-range game. Several inside and outside the Lakers believed otherwise. Though he averaged only 3.4 points and 4.0 rebounds in 12.7 minutes through 39 appearances, Black pointed out his numbers were pretty efficient when considering the minutes he had to produce them.

“He had a rough year last year for many different reasons,” Lakers forward Larry Nance Jr. said. “But starting the year off like this, there’s not a person in the locker room not happy for him. He’s such a good guy and works so hard. He deserves to have a night like this.”

Black’s night started off a little rough where he mixed in a basket and a rebound with an offensive foul.

Black’s night ended where he played a key part in securing the win. He helped the Lakers close out the third quarter with a 11-3 run that included converting on a pair of foul shots and finishing a layup to cut Sacramento’s lead to 68-62 with 1:34 left. In the fourth quarter, Black converted on a three-point play and a layup on consecutive possessions to give the Lakers a 72-69 edge with 10:25 left.

Nearly three minutes later, Black walked off the floor for good and gave Lakers coach Luke Walton plenty of reason to think he could play at backup center ahead of Yi Jianlian and Ivica Zubac. As Walton said, “He definitely helped his case tonight in the way he played.”

“He’s coachable asks for advice and goes out and does what you tell him to do,” Walton said. “He’s been diligent about getting in there and working. It was nice to see him when the game came around to have a night like that.”

Not that this should surprise Black entering his fourth NBA season.

He resigned with the Lakers to a two-year, $13 million partly because Walton told him he would have a “fair shot” to crack the roster. Black argued he could play equally effective at power forward and center, citing both his versatility and Walton’s system that he called “so interchangeable.” Black also credited his offseason that entailed “working on my mentality during the game and being more confident when I’m out there on the floor.”

“I’ll continue to play hard. I just want to get the offense down,” Black said. “But for me personally, my skillset is going to show, especially with this offense. We can open up the floor and start doing some things. It’s going to be a process.”

All of which gave Black the proper perspective.

He stopped and soaked in the moment.

“It’s really cool,” Black said. “I’m really blessed and I thank God I was able to go out there and perform the way I did.”

Then Black looked ahead, determined not to allow this one positive night to serve as redemption.

“You all have to keep in mind that it’s preseason and only one game,” Black said. “I picked up a ball to be great, do really good and have a long career. One night in the preseason is awesome. But it’s about continuing on.”