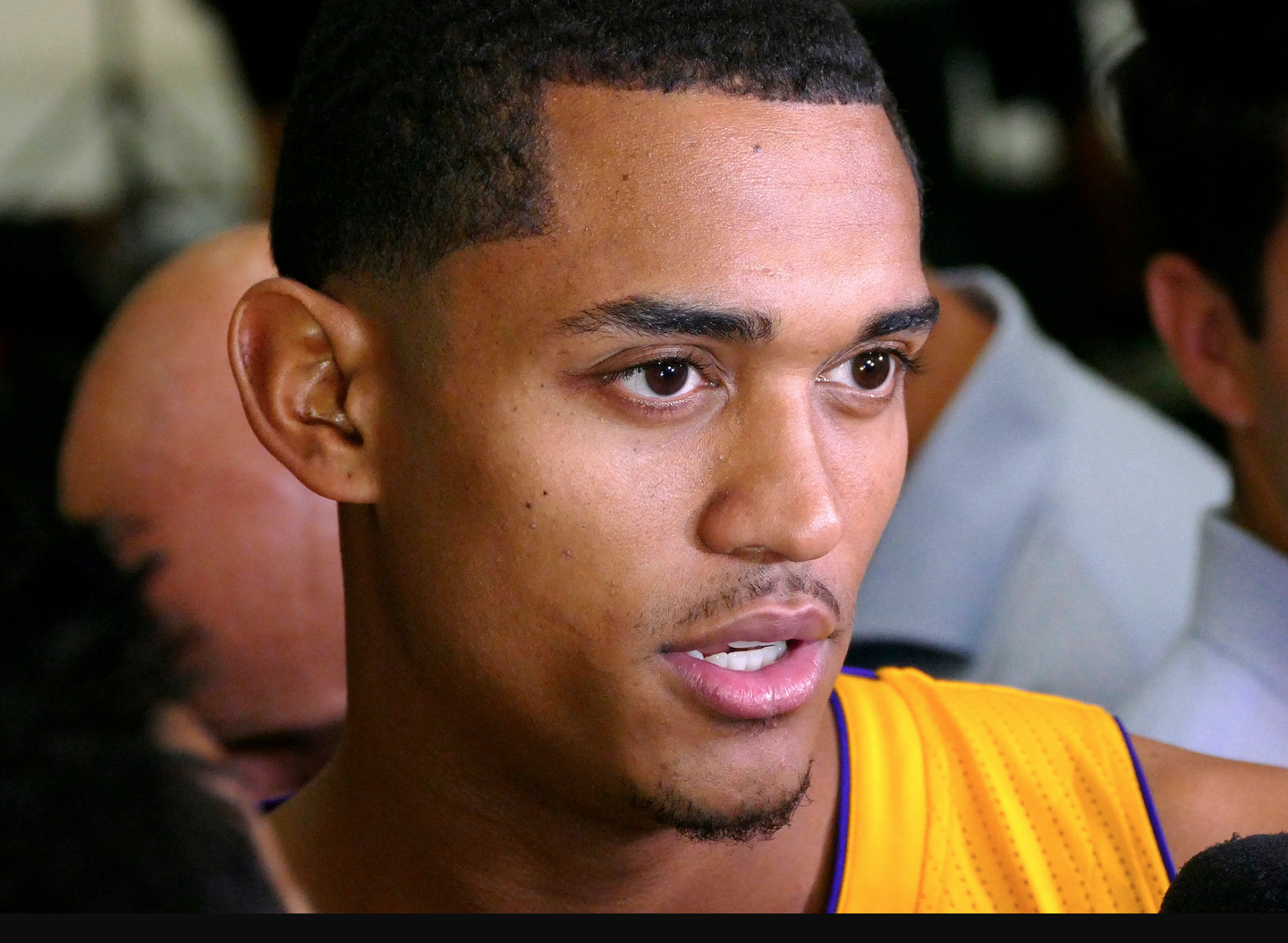 LAS VEGAS –The stoic expression on Jordan Clarkson’s face told the whole story. So did his soft tone.

The Lakers’ third-year guard has been quiet in recent days while grieving over the unexpected death of Cameron Moore, who was a high school rival and close friend in San Antonio.

Clarkson flew from Las Vegas to San Antonio to attend Moore’s funeral in San Antonio on Friday only to return back to Las Vegas later that night.

“It’s been a tough 48 hours for me,” Clarkson said following the Lakers’ 112-107 exhibition loss to the Golden State Warriors on Saturday at T-Mobile Arena. “But I’m trying to bring what I do on the court and use it to get away.”

So much that Clarkson plans to dedicate the 2016-17 season in Moore’s honor.

“That’s one of my best friends,” Clarkson said. “That’s who I grew up with. He always looked out for me when I was young.”

Moore died during his first practice with AV Ohrid, a basketball team in Macedonia. Before starring for four seasons at the University of Alabama at Birmingham, Moore played at Theodore Roosevelt High in San Antonio. Meanwhile, Clarkson played at Wagner.

“He lived with me most of the summer, working out with me and everything,” Clarkson said. “It’s been tough on me.”

Clarkson then adjusted to appearing in the starting lineup for the first time in exhibition play so veteran guard Lou Williams could rest and because Walton has considered Clarkson the team’s best perimeter defender.

Clarkson scored 15 points albeit 4-on-14 shooting, something Lakers coach Luke Walton attributed to the the starting unit’s lack of ball movement.

“It was a small sample size,” Walton said. “The ball wasn’t as freely moving and he didn’t seem to get as many good looks and rhythm looks as he’s getting with that second unit.”

It probably did not help Clarkson had to deal with issues far more serious than the chemistry in the Lakers’ starting lineup.

“For someone his age to have to deal with all of that and still be here and play games and all of that has to be pretty heavy and hard to do,” Walton said. “But he’s kept a good attitude and continue to work hard through the whole thing.”

Clarkson has kept that attitude despite unexpectedly assuming a bench role. Walton said he has not determined if Clarkson will start again in exhibition play, let alone the regular season.

Although Clarkson would like to start, he stressed he and Walton “got a good relationship.”

“I’m willing to do whatever he wants me to do for him,” Clarkson said. “Whatever this team needs to me to do. If it’s come off the bench, provide a spark or scoring the ball or being that way defensively, that’s what I’ll be. Nothing is going to change in my game. I’ll always be aggressive and I’m going to score. At the same time, I still have to play for my teammates and be better on defense.”

Clarkson downplayed studying past NBA sixth man of the year candidates, saying “I want to be my own person that will make my mark.” But Walton cited Golden State forward Andre Iguodala and former Lakers forward Lamar Odom as good examples.

“They helped stabilize it. It’s like having a starter with the second unit,” Walton said. “When you’re on the road and middle of the season and you’re playing four in five nights, sometimes you catch a lot of slippage from your bench. To have somebody that is really a starter in that unit helps level that off for when the times are tough.”

That hardly compares to the tough times, however, to what Clarkson has recently experienced. As he reflected on his friendship with Moore, Clarkson was asked what memories will stick with him the most. Clarkson then stared at the ground and offered a sullen answer.