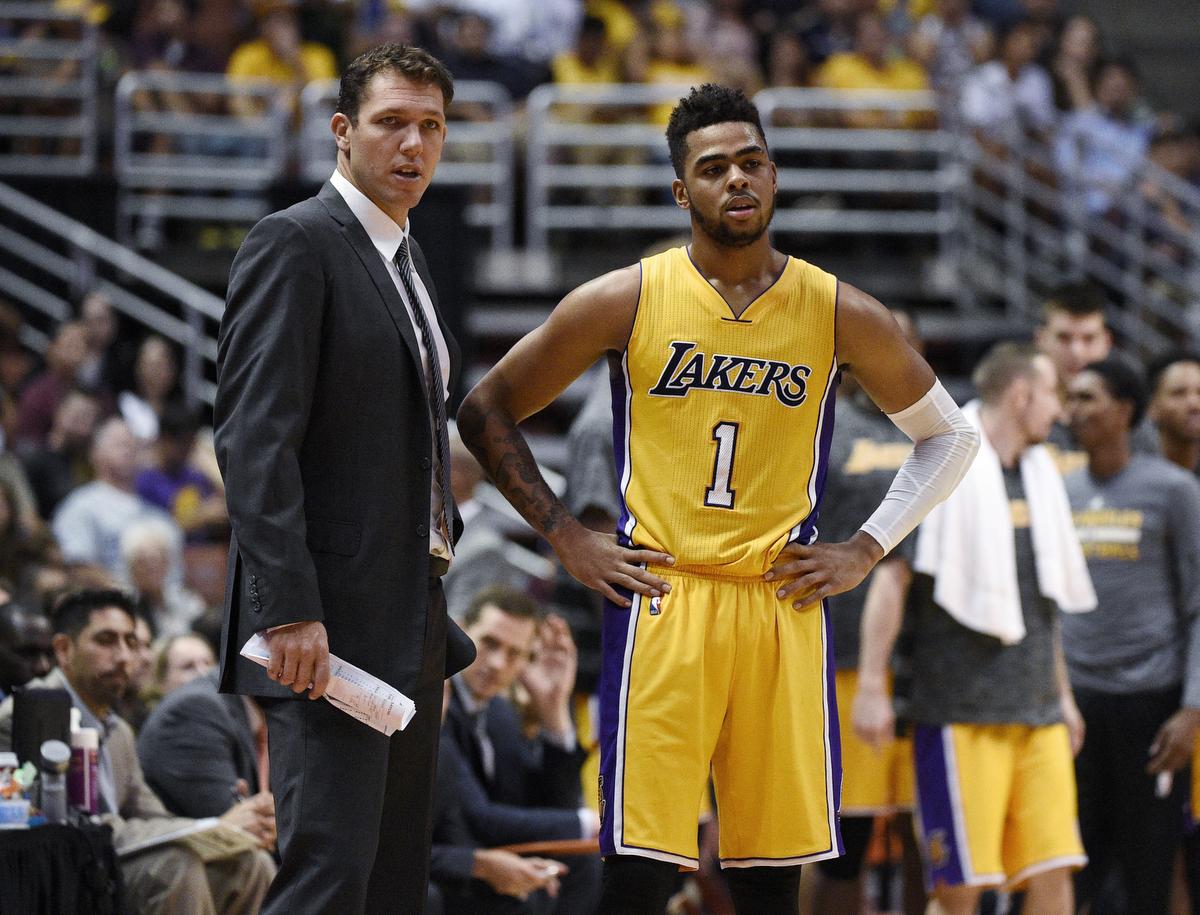 So many interesting storylines and question marks surround the Lakers for the 2016-17 season. Sure, the Lakers (1-0) enter Friday’s game against the Utah Jazz (0-1) at Vivnt Smart Home Arena only two days removed from a commanding win over Houston in the season opener. But as Lakers forward Julius Randle said, “it’s just one game; it’s not the dang Super Bowl.”

So as the Lakers’ journey begins, a few NBA experts chimed in about what makes them both encouraged and uncertain about the Lakers’ future.

What can the Lakers accomplish this season??

Reggie Miller, TNT analyst: “It’s building toward the future. Obviously it was the Kobe Bryant farewell show a season ago. I think a lot of times D’Angelo [Russell], Julius and Jordan [Clarkson] got caught up being spectators. It’s a fresh start. Luke Walton is coming in with a totally new system … “The Lakers need to win. If this young core can continue to get better, that will help with recruiting the free agents of the future to come to LA to try to bring this franchise back to prominence … They’ll take their lumps. I don’t see them anywhere near the Western Confernece playoffs. Btu they’ll be much better at home than they are on the road. That’s how most young teams are.”

Grant Hill, NBA TV/TNT analyst: “The playoffs, I don’t see that as a possibility. Crazy things have and will happen. But I like that young core …You hope they are better and playing with more confidence the last third of the season. It doesn’t necessarily translate into wins. But it’s more about these guys developing and becoming better players and using this year as a chance to get better.”

Kevin McHale, TNT analyst: “Luke’s biggest challenge is going to be on the defensive end with those guys. I watched the exhibition games. They’re not tied together. But they’re young kids. They don’t understand how to shrink the paint and how to get out and cover for each other … Luke will have some gray hair at the end of this year. I can’t wait to run into Luke and talk to him. He’ll do a great job with that team.”

Anonymous NBA executive: “They’re not going to win a lot of games. They have to be self aware enough that no matter what lineups you put on the floor, they’re not a playoff team. They’re good for 25 to 30 wins … Luke will play a style they’ll enjoy and he’ll relate to the other players well. Luke has the luxury of not having to manage the whole Kobe situation and he can play who he wants to play. It’s a great situation for Luke. No one is expecting much from the Lakers this season so he can get on-the-job training.”

Anonymous NBA assistant coach: “They’re going to be a better team obviously than last year. But like anything in the NBA, it takes good teams time to gel. I think it’s like cooking a dinner. If you could bake it in 15 minutes or 10 minutes, it won’t be that good of a dinner. That’s why the best meals are on Christmas and Thanksgiving. It takes lots of preparation.”

Which player is most likely to become a star?

Miller: “I’ve always been a fan of D’Angelo Russell since he was at Ohio State. He’s a guy that at 6-foot-5, can play multiple positions and handle the basketball. He has the vision and has worked on his 3-point shooting. He needs to grow up. He got put in the fire last year over everything that happened internally with the Lakers. But that makes you stronger. Certainly he has the skillset to be an All-Star. Now it’s a matter of him going out there and elevating his team.”

Hill: “Obviously I love Ingram and, in particular, where he went to college at Duke [laughs]. I do like Ingram. I think he has the potential to be an All-Star this year.”

McHale: “Ingram’s got all the skills to be an All-Star. Does that mean he’ll be an All-Star this year? No but he’ll fill into his body and is going to get stronger. I think he’s a really good player. I look at him. There’s other guys that could be. But they have to make big jumps.”

Anonymous NBA executive: “Brandon Ingram. He’s by far the best player in the draft. Ben Simmons is a little bit overrated in that he’s more Lamar Odom than Magic Johnson. It will take time, no doubt. But Ingram has a chance to be really, really good.”

Anonymous assistant coach: “D’Angelo is the one that stands out because he’ll have the ball in his hands all the time. He’s obviously going to touch the ball pretty much on every possession. His impact on the game will be felt early.”

Fans disapprove of Mike D’Antoni’s return, but Luke Walton approves of his offense