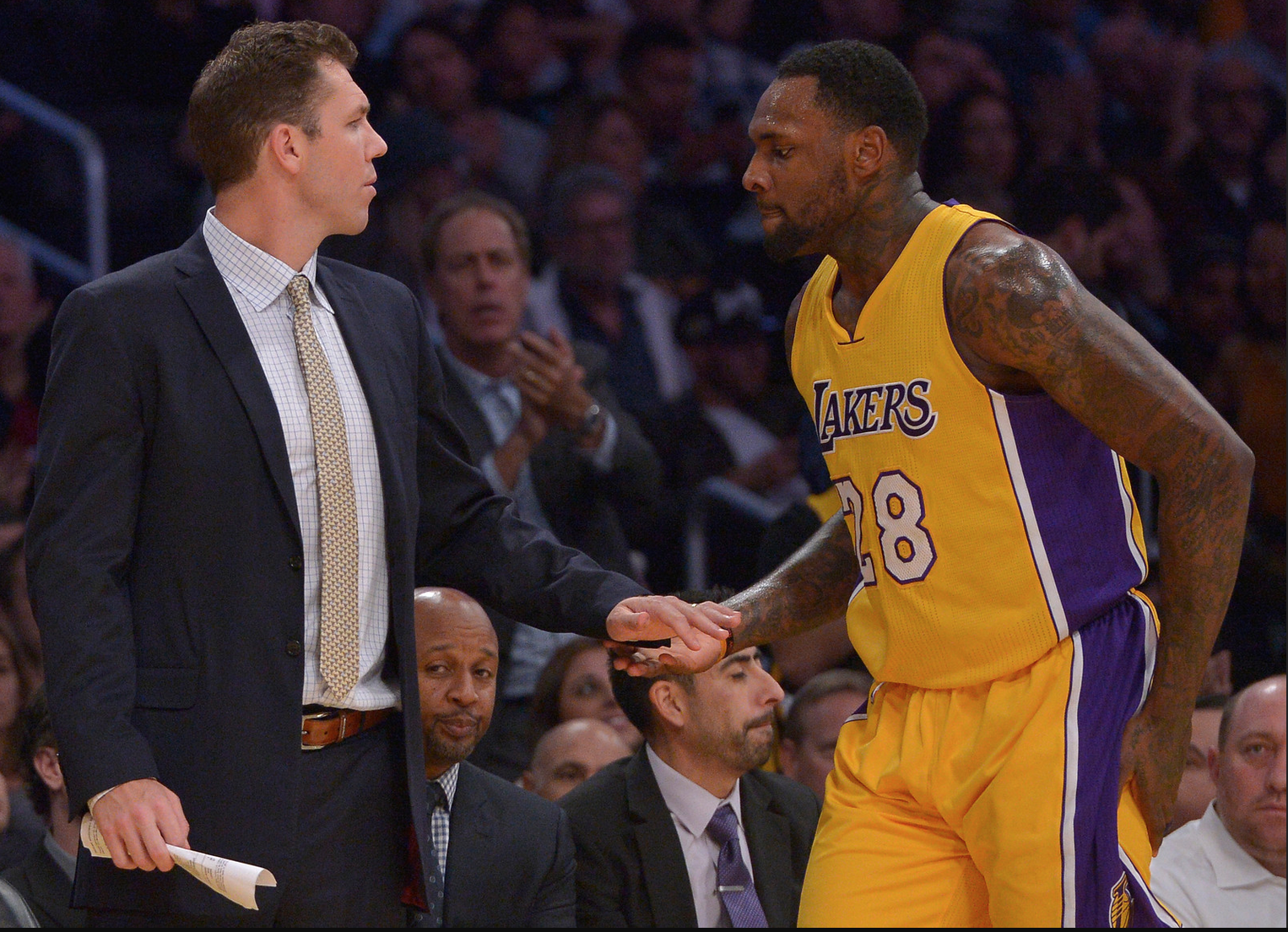 The self-criticisms came out of the Lakers’ mouths much faster than most of their defensive rotations.

After the Lakers’ 118-110 loss to the Chicago Bulls on Sunday at Staples Center, it seems safe to say forward Julius Randle would give himself an “F” for his work on Taj Gibson, who had 15 points on 7-of-12 shooting and seven rebounds. It also only took 19 seconds for Gibson to pen the game with a turnaround hook shot.

“I did a terrible job in defending Taj,” Randle said. “I just didn’t play well.”

Lakers forward Larry Nance Jr. sounded just as critical. The Bulls outrebounded the Lakers, 56-37. Chicago forward Jimmy Butler lived out his pre-game prediction by scoring 40 points on 14-of-23 shooting. And the Bulls had 60 points in the paint.

So even if Nance collected a career-high 18 points and six rebounds, he still outlined something both he and reserve forward Tarik Black could do better.

“Our interior defense is obviously something that has to get better,” Nance said. “Whether I take more of a shot-blocking role or Tarik can, or we can just keep guys out of the middle more.”

Can the Lakers (7-7) fix those issues when they host the Oklahoma City (8-6) on Tuesday at Staples Center? Good luck. The Lakers rank 27th out of 30 NBA teams in points allowed (109.6). They have the unfortunate task of defending Thunder guard and former UCLA standout Russell Westbrook, who posted a triple double last month against the Lakers. And they face an Oklahoma City team that ranks third in total rebounding (46.6).

“I’m glad that he said that. It shows that he’s not complacent and he feels that he can grow and honestly taking ownership on himself,” Black said. “He can say, ‘I can do something.’ How often do you hear that? Most guys on the team, when they’re down are like ‘we need to’ or ‘they need to.’ You hear a lot of different other words toward other people. But for him to say of himself, and I’m glad he’s holding me accountable as well. You guys see it. We love each other. We don’t take anything personal from each other because we know that each and every one of us individually wants to see the other grow and get better. There’s no animosity toward each other. It’s never malicious. We know. I know that when he says that, he really has his best interest and heart for me and this team to get better. He’s saying that’s what we can do to become a better team, I agree.”

Partly because of that dynamic, Walton has raved about the team’s defensive effort. As for the team’s execution? That’s a different story.

“We shouldn’t get that fatigued. Nobody plays that many minutes,” said Walton, alluding to his deep rotation. “Some guys will play long stretches if a group is growing well together. But a lot of it is learning to fight through fatigue and mentally stay sharp when your body and mind tells you that you need a break.”

The Lakers experienced similar issues last season under former Lakers coach Byron Scott where the Lakers finished 27th in points allowed (106.9) and 29th in defensive field-goal percentage (47.3 percent). Some of the reasons also stemmed from the Lakers’ obsessions with one-on-one play leading both to defensive disengagement and turnovers. Former center Roy Hibbert also struggled to close out on rotations and keep up with his younger teammates’ faster pace.

Though the Lakers have flourished offensively under Walton’s more innovative playbook and stronger ball movement, Black argued the new concepts have contributed toward the team’s defensive disorganization. Hence, Black echoed Walton’s thoughts on the importance of communication. The 6-foot-9, 250-pound Black also expressed more agreement with Nance as his potential as a team defender than his ability to block more shots.

“I’m playing against a lot of guys that are seven feet. Me personally blocking a guy who is seven foot when he’s taking a hook? Probably not going to happen,” Black said. “More than likely, I’ll be there on the rotation and be there on the helpside and clean up the glass, especially with our athleticism. That’s something we can work on and get better at. It’s not being complacent. It’s always wanting to grow. If that’s one area he thinks I can grow in, I agree 100 percent.”

Nonetheless, Walton has offered positive reinforcement through those struggles. During Monday’s practice, he played a clip of Butler scoring that actually showed Lakers forward Nick Young fighting through a screen and receiving helpside defense only to have Butler hit a contested fadeaway. Walton insisted to Randle that his defense was not terrible, stressing that Gibson’s early hook shot simply “helped set the tone for the game.”

“They are not major things,” Walton said. “But they are a bunch of little things that add up. It just keeps really hurting us.”