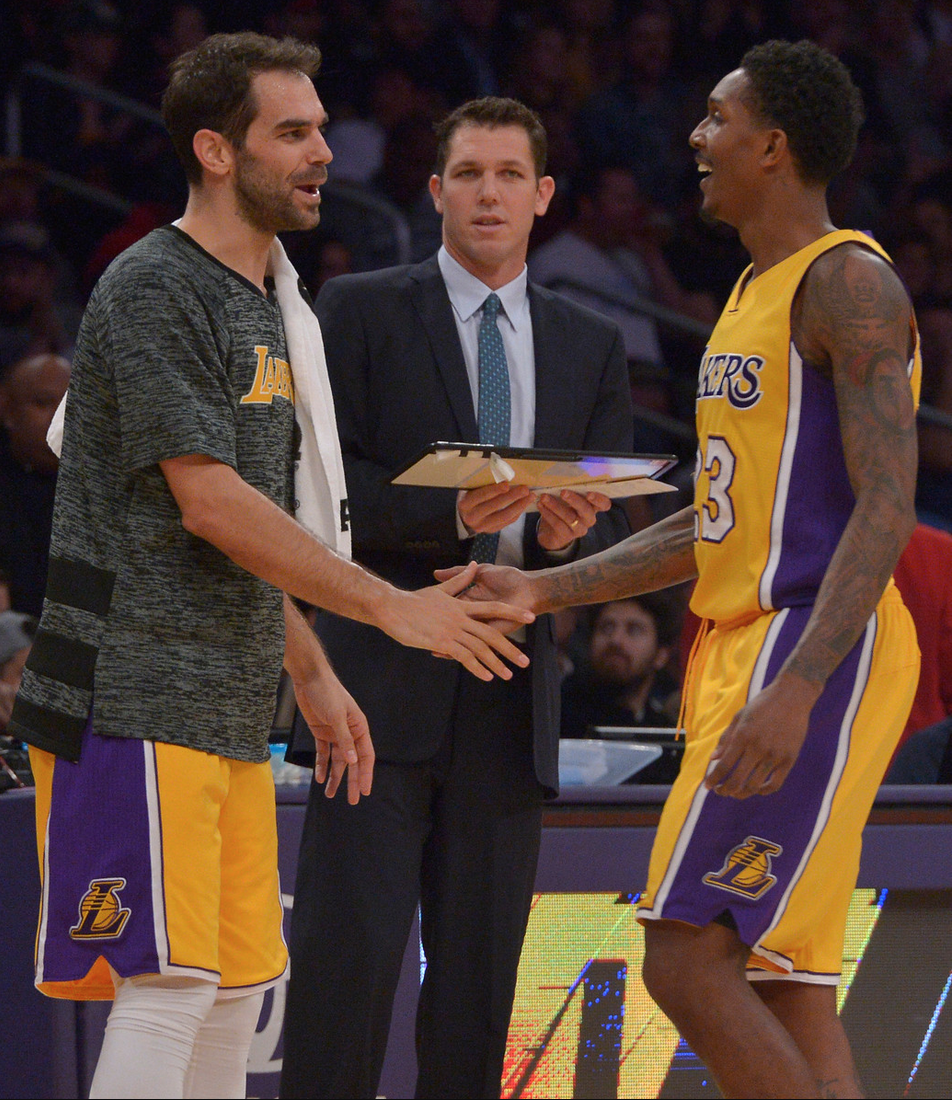 The job description calls for Jose Calderon to work hard in practice without any guaranteed playing time. The Lakers want him to mentor the team’s younger players without any assurances he will receive anything in return. And the Lakers expect Calderon to stay ready to step on the court on short notice.

Despite that challenging framework, the early returns suggests Calderon can fulfill that challenge. While Lakers guard D’Angelo Russell missed his second game in a week because of persisting knee soreness, the Lakers secured a 111-109 victory over the Oklahoma City Thunder on Tuesday at Staples Center for reasons beyond Nick Young making a game-winning 3-pointer.

Calderon chipped in with 12 points on 4-of-5 shooting, six rebounds and four assists in 22 minutes. He ensured a balanced offense that featured double-digit performances from Jordan Clarkson (18 points), Young (17), Timofey Mozgov (16), Lou Williams (13) and Brandon Ingram (11). And for all the mixed head-scratching and amusement over Young stealing an intended pass for him, Williams pinpointed a different factor that ensured the Lakers (8-7) snapped their 8-game losing streak to the Thunder (8-7).

“I thought Jose played really well,” Williams said. “I thought Jose did a phenomenal job of filling in and giving us that veteran leadership on the floor. He was able to make some big, timely shots. And he held it down.”

Calderon did that in numerous ways. He sank 3-pointers almost anytime he tried to take one, going 4-of-5 from the perimeter in what also represented his total mark from the field. He took charges willingly as a way to disrupt Thunder guard Russell Westbrook from charging into the lane. And he played with a fiery grit needed to jumpstart the Lakers, while maintaining the steely presence of a 12-year NBA veteran.

That does not usually represent the workload Calderon has assumed. He has averaged 4.1 points and 1.4 assists in 10.9 minutes per game through seven appearances. But when Russell first sat out last Friday against San Antonio, Walton turned to Calderon for a few reasons.

Walton has remained hesitant in disrupting the team’s reserve unit considering its leads NBA in bench scoring (51. points per game). Though Lakers rookie forward Brandon Ingram has assumed ball handling duties, Walton did not want to put too much pressure on him as a starting point guard. And Walton has become impressed with Calderon’s hustle, understanding of his offense and vocal leadership. In turn, Walton saw Calderon do a “great job” with his shooting and ball movement.

“He was great for us. There was no worry in the fact how we were going to run the offense without our starting point guard,” Walton said. “We know Jose has been doing this for years. It was comforting to have him be the call that would step in.”

That call might happen again when the Lakers visit the Golden State Warriors (8-2) on Wednesday in Oakland. The Lakers already ruled Russell out both to play and travel with the team. It currently remains unclear if Russell will miss even more games.

Walton remarked he “was a little worried” after seeing Calderon nurse ice bags afterwards, leaving the possibility that seldom-used backup guard Marcelo Huertas will play against the Warriors instead.

As he showed against the Thunder, though, Calderon appears capable of leading the charge.

“We’ve been practicing hard and I am comfortable with my teammates,” Calderon said. “I know what they like. I’m ready for it.”