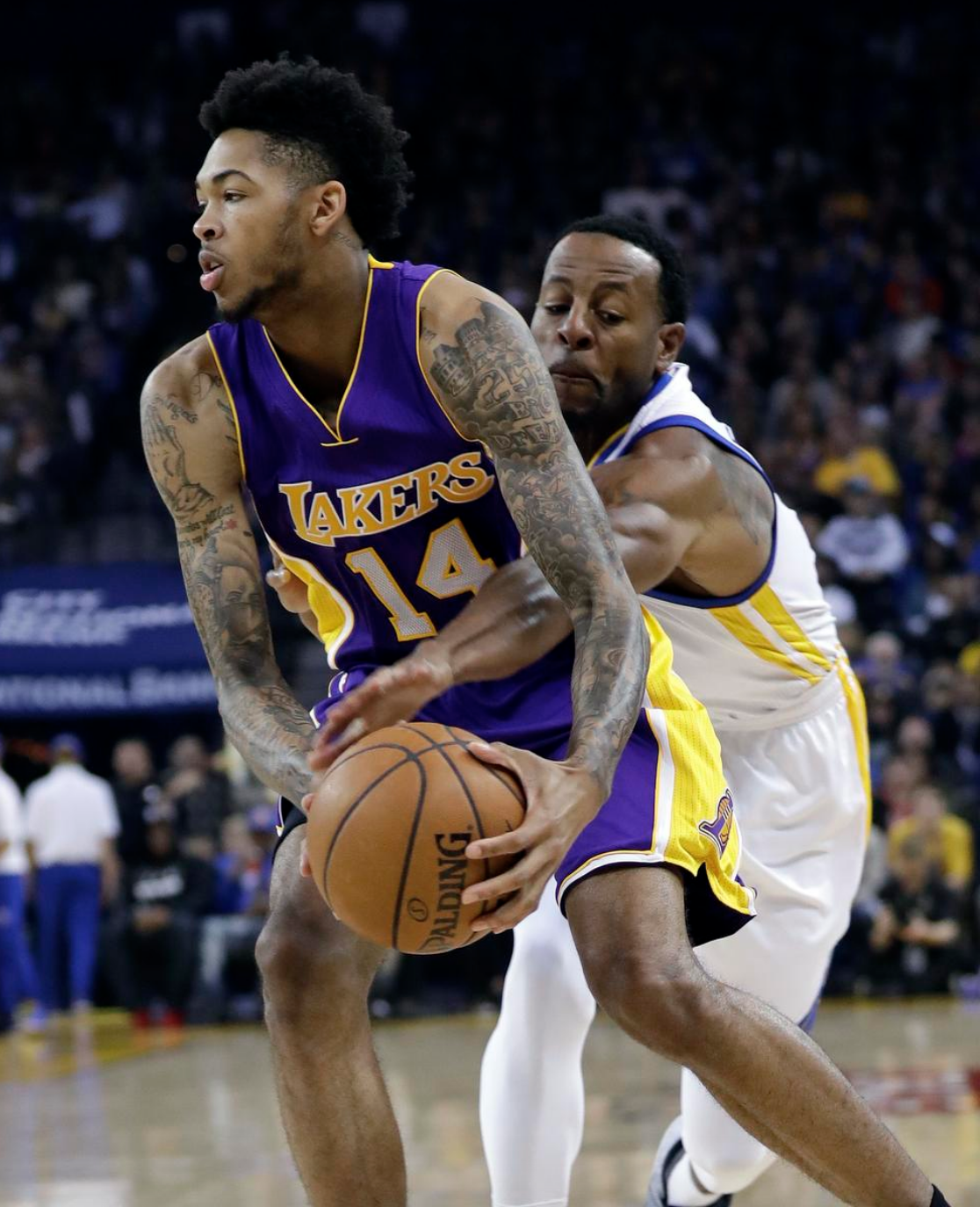 Lakers rookie Brandon Ingram drives to the basket as the Warriors’ Andre Iguodala defends during the first half of Wednesday’s game in Oakland. AP Photo: Marcio Jose Sanchez

OAKLAND — The stoic reaction reflected Brandon Ingram’s personality as the Lakers’ 19-year-old rookie has relied on his actions to speak louder than his words. It also revealed his mindset on both assuming a larger role and handling the pressure that comes with it.

Ingram maintained he hardly flinched when he learned shortly before the Lakers’ 149-106 loss to the Golden State Warriors on Wednesday at Oracle Arena that he would start at small forward while Luol Deng would slide at power forward in place of an injured Julius Randle (hip pointer). Even though the Lakers hardly had any answer to stop the Warriors’ firepower, Ingram hardly showed many nerves as he posted a career-high 16 points on 6-of-12 shooting and three rebounds in 34 minutes. Lakers coach Luke Walton called the performance “good,” before also noting Ingram’s three turnovers.

Before, Ingram had viewed things differently. He never publicly complained about his role to open his rookie season. The Lakers also have liked how Ingram has embraced the learning process as he has assumed ball-handling duties, a post-up role and closeout duties. Yet, Ingram admitted the move made him more motivated to prove he was worthy of the start.

So while Lakers guard D’Angelo Russell has his development on hold for at least the next two weeks while recovering from a sore left knee, Ingram’s progress advanced to another stage.

“It’s never easy to start your first NBA game, but I think he did a pretty good job,” said Lakers veteran guard Jose Calderon, who started in place of Russell in three of the past four games. “He hit outside shots. Like everybody else, I think we could’ve started a little bit better.”

The Lakers trailed 41-26 after the first quarter. En route to 31 points on 11-of-18 shooting, Golden State guard Steph Curry made four 3-pointers in the opening period. The Lakers only shot 38.1 percent from the field.

As for Ingram, he quickly had to learn how to play with Calderon, Nick Young, Deng and Timofey Mozgov after representing the Lakers’ league-best reserve unit. Warriors forward Draymond Green forced Ingram in committing an early turnover. And Ingram also had the unpleasant task of defending his childhood idol, Kevin Durant, who had 28 points on 11-of-15 shooting.

“I’m in the NBA now and I’m guarding a lot of different guys in this league,” Ingram said. “It’s not a surprise anymore. It’s going out there and trying to compete.”

So as much as Walton considered the loss insignificant in the team’s development because of its injuries and superior opponent, Ingram’s temporarily increased role could yield to bigger growth. He opened the game hoping to elevate his game against enhanced competition. He closed the game in a blowout scenario fine-tuning his craft.

“It’s something that people told me was coming. We know it’s a process,” Ingram said. “I’ll listen to the coach and whatever he wants me to do, I’ll do. If he wants me to be aggressive, that’s what I’ll do. It’s been fun.”

Short-handed Lakers are overwhelmed in 149-106 loss to Warriors