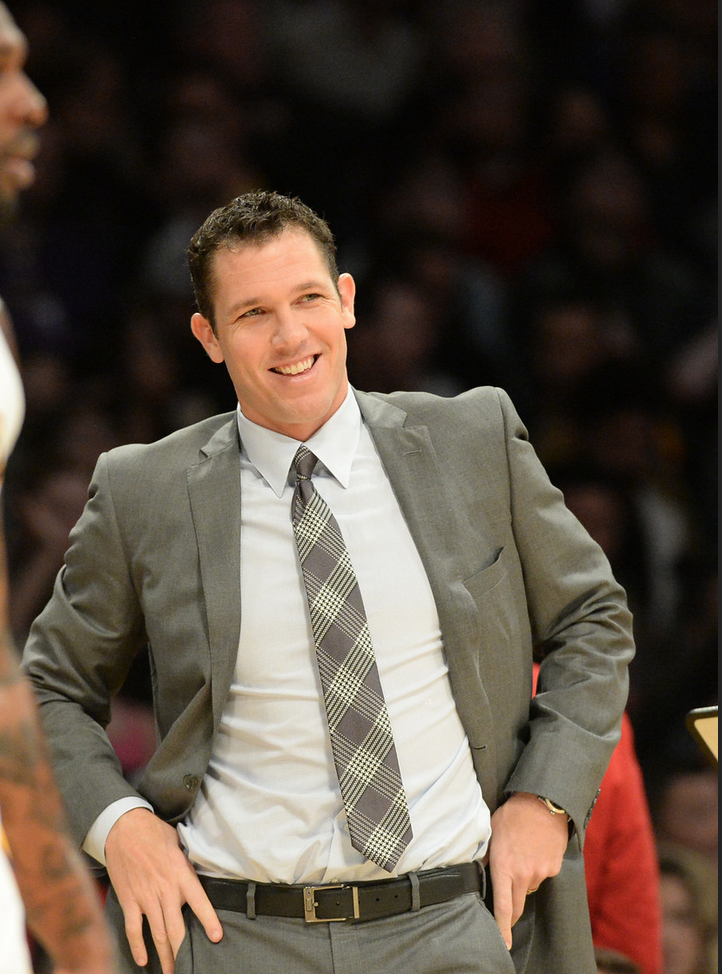 The Lakers’ coach Luke Walton lets loose a smile against the Spurs during a NBA game at STAPLES Center Sunday, February 26, 2017, Los Angeles, CA. The Spurs led at the half 61-41. Los Angeles Lakers vs. San Antonio Spurs Photo by Steve McCrank, Daily News/SCNG

EL SEGUNDO — As he wore a smirk on his face, Lakers coach Luke Walton suggested he will change his bench rotation for when the Lakers (19-41) host the Charlotte Hornets (25-34) on Tuesday at Staples Center. “Tune in and see,” Walton smiled.

Here’s an early prediction: Walton will feature guard David Nwaba after the Lakers signed him on Tuesday to a 10-day contract. While the Lakers will monitor Nwaba’s growth after the undrafted 6-foot-5 guard starred with their Development League affiliate, Walton also held out hope Nwaba could improve something that has plagued his roster all season.

“I love his defense,” Walton said. “As we continue to try to be a more defensive oriented team as far as growth, I think it’s important we get defensive minded people around here. Going to D-League games and watching him on tape, I think he’s the type of the guy that can help us build an identity where we want to play defense.”

Rarely has that happened. The Lakers have fared 27th out of 30 NBA teams in points allowed (110.9), 29th in defensive field-goal percentage (48%) and 28th in fast-break points allowed (15.5). While Walton insisted the Lakers have “gotten better,” he then conceded that “we’re a long way and far way away from where we need to be.”

Hence, Nwaba sounded well aware of what will help him stay beyond his 10-day contract.

“My defense. That’s what they’re interested in with me,” Nwaba said. “I’m going to play hard and make the hustle plays and see what I can do if I get the opportunity.”

Nwaba received his opportunity to play with the Lakers after averaging 13.9 points on 64.5 percent shooting and seven rebounds in 29 minutes in 38 games with the D-Fenders. He also showed marked improvement through 10 games in February in points (21.1), field goal percentage (65.6%), rebounds (8.9) and minutes played (34.2), numbers he attributed to “building confidence.”

The Lakers noticed. Walton had kept his eye on Nwaba for the past two months and even congratulated him for a good game after a recent performance. But the Lakers did not make any moves after negotiating a buyout on Monday with veteran guard Jose Calderon. Soon afterwards, D-Fenders coach Coby Karl called Nwaba to report to the Lakers’ practice facility. Nwaba thought Karl wanted him to work an event with the Boys and Girls Club. Instead, the Lakers informed Nwaba of his call up.

“I was shocked and very happy,” said Nwaba, who starred at University High School and Cal Poly-San Luis Obispo. “It’s pretty crazy growing up a Lakers fan and dreaming about this day and it’s finally happening. It’s a great feeling.”

Nwaba listed Kobe Bryant as his favorite Laker growing up, but he is hardly expected to offer much scoring punch. Instead, the Lakers will monitor how Nwaba fares on the other side of the court.

“I’m always believing in the possibility of getting called up,” Nwaba said. “I didn’t think it would happen this soon, but I’m continuing to keep working on my game and I keep getting better every day.”