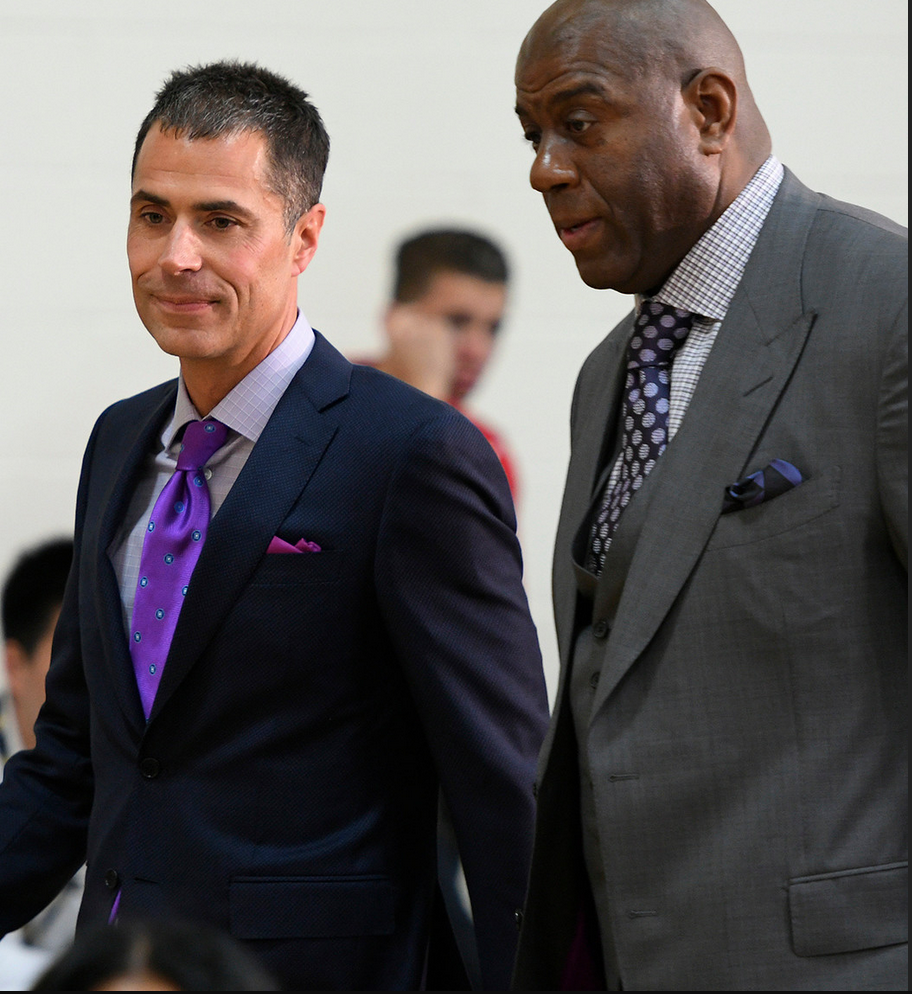 EL SEGUNDO — A recognizable person emerged back to the Lakers’ perch that oversees their practice facility. Magic Johnson watched the team’s practice on Thursday, likely with many thoughts and opinions surrounding the Lakers following their 39-point loss in Houston on Wednesday.

So once practice ended, Johnson went down to the court with general manager Rob Pelinka. Soon enough, both Johnson and Pelinka provided individual feedback sessions with plenty of the players.

Johnson and Pelinka had plenty to say with the Lakers (20-48) entering Friday’s game against the Milwaukee Bucks (33-34) at Staples Center after losing 10 of their last 11 games.

“It’s really cool,” Clarkson said. “It’s good for us being able to talk to them and pick their brains as well and having that open door presence.”

While their message likely differed from player to player, Clarkson’s feedback entailed both topics surrounding the state of the team and his own development. With Clarkson serving as the starting point guard for the past two games, Pelinka and Johnson told him about becoming more vocal. Clarkson conceded that process has been “work” since he’s “always not been the most talkative guy.” But with Walton lamenting how the team lacks trust and communication during moments of adversity, Clarkson vowed to be more assertive than usual.

“Talk and communicate; that’s where I feel like we lack sometimes because we’re young,” Clarkson said. “You feel like you’re also doing something wrong so you don’t want to speak up. We have to step out of our comfort zone and start to do that.”

The Lakers’ failed to do that against Houston, allowing an eight-point third-quarter deficit to balloon in the fourth quarter where the Rockets outscored them, 45-26. Because of that, Walton offered an unprintable and undisclosed message to his players. Walton sounded more upbeat on Thursday, noting he felt in better spirits after sleeping and having his morning coffee.

Walton also evoked sympathy for the Lakers’ regarding varying lineup changes and the recent changes to the front office. Yet, Walton stressed he wants the Lakers’ young core to have a “by committee” approach toward ensuring better effort during tough times.

“Individually and, as a group, we don’t have that one alpha yet or All-Star type of guy to really calm us down when adversity hits,” Walton said. “We’ll keep pointing it out and showing it on film to encourage our guys to stpe up and do things like that and recognize when those times are. We’ll get there.”

During that process, Walton, Johnson and Pelinka will likely provide more feedback. Zubac discussed his offseason plans with Pelinka and Johnson that will entail resting briefly before training extensively in Los Angeles.

“They’re going to keep track of me this summer,” Zubac said. “I have to work hard this summer because this summer is important for me. Now everybody knows me. I have to be better than this season.”

Zubac believes the feedback from the Lakers’ front office will help ensure that.

“That’s great. It’s good to know what other people around the team thinks,” Zubac said. “It’s great to know what they think, what Luke thinks and what everybody on the staff thinks. That’s the way I can improve.”

Lakers’ Rob Pelinka says he will ‘be aggressive’ in rebuilding