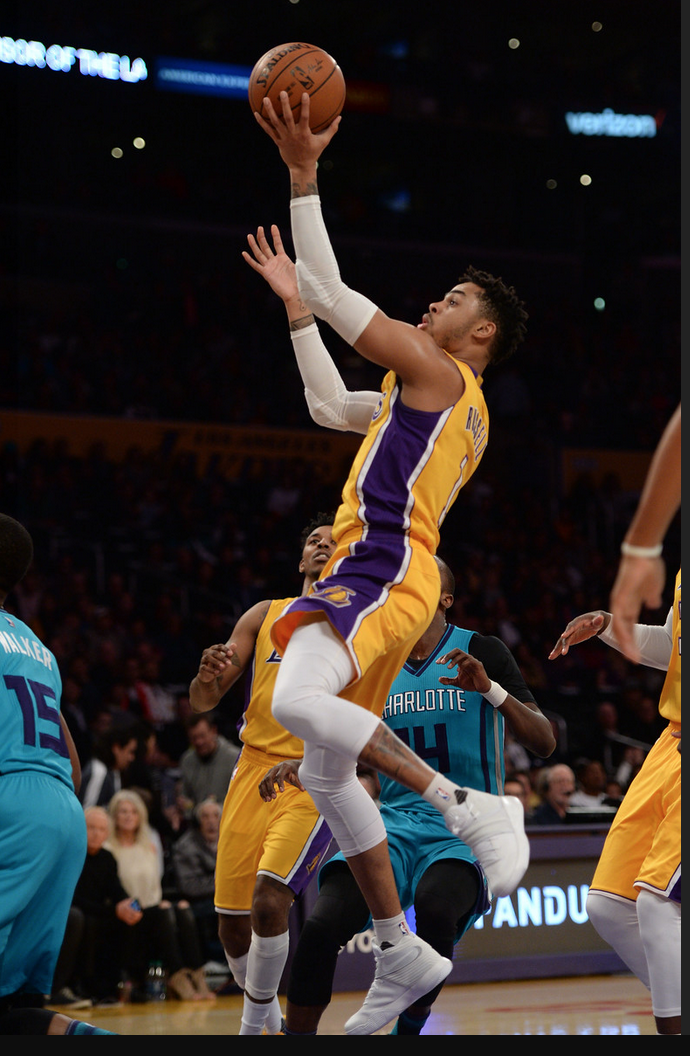 Throughout those long discussions, one common message emerged on what they want to see from Russell for final 14 games of the 2016-17 season, including when the Lakers (20-48) host the Milwaukee Bucks (33-34) on Friday at Staples Center.

“Be aggressive no matter what my role is,” Russell said after Friday’s morning shootaround. “Just be aggressive.”

Russell’s role has usually entailed being the Lakers’ starting point guard, a position where he has shown mixed progress. He has averaged 15.2 points on 40.2 percent shooting, 4.8 assists and 2.7 turnovers in 27.5 minutes. But in the first eight games after All-Star break, Russell posted 20.5 points on a 44.8 percent clip and 5.4 assists in eight games.

Russell’s role has since changed, though. He has come off the bench in the past two games out of Walton’s preference to evaluated third-year guard Jordan Clarkson at point guard with a traditional lineup. Walton said he also remains undecided if that will continue for Friday’s game against Milwaukee. Other candidates include veteran guard Nick Young and guard David Nwaba, who’s in the middle of his second 10-day contract.

“Do we want David’s defense out there?” Walton asked rhetorically. “Do we want Nick as a traditional shooting guard out there? Do we want D’Angelo so we can see him in a starting group with him and JC? Those are the three major [variables]?”

Walton has thus far resisted the last option. So far, the results haven’t been good. Russell has averaged 7.5 points on a 25 percent clip, 2.5 assists and 4.5 turnovers in his two games as a reserve thus far.

Russell has not publicly complained about his recent role. He only has advocated featuring him as an off-ball shooter with a ball-handling Clarkson, something Walton has done in segments. Despite Russell’s poor play and questionable body language, Walton said he has not caused any issues since losing his starting spot.

“I’m sure there’s frustration. “He’s been good and has been getting his work in before practice and still getting it in now,” said Walton as he watched Russell complete a shooting routing during morning shootaround. “There’s no pouting or no bad behavior or anything like that.”

Still, Russell conceded some struggles with his new role.

Although he maintained he still was aggressive in Wednesday’s 39-point loss, Russell outlined the learning curve he has faced as a reserve.

“My mentality wasn’t in the right place, wasn’t making shots and I wasn’t creating for others either,” Russell said. “It’s just new being in the position I was in, in finding the openings. They are all foreign positions for me.”

The bench role isn’t foreign to Russell. He lost his starting spot 20 games into his rookie season because former coach Byron Scott grew frustrated with the team’s record as well as Russell’s inconsistency, work habits and attitude. Walton said he has made the move out of the sake of collecting data in various lineups amid a season geared more toward development. Prior to this week though, Russell had not played with the reserves on the court or in practice.

So even if Russell maintains he’s confident, the Lakers front office and coaching staff have provided him different feedback.

To reduce Russell’s high level of turnovers, Walton wants him to find a better balance in minimizing risky passes without diluting his aggressiveness.

“The early turnovers got him out of his game a little bit,” Walton said of Russell’s game against Houston where he ended with seven turnovers. “When I saw the turnovers, I saw what he saw. They were open, but they were risky passes. To me, you always want to get in a rhythm once you get in and make some clean passes and feel the game out before you start to make those higher risk, higher reward type of plays. Another thing you learn to develop when you’re coming off the bench as opposed to starting is developing a rhythm as soon as you get in.”

To develop that rhythm, the Lakers’ brass, including Johnson, have told Russell to stay aggressive.

“Just his credibility alone, when he talks to me and gives me any advice, it gives me the confidence where I feel like I can do it,” Russell said. “It’s good. Especially to have one of the top NBA point guards ever in the game as your president is always a plus.”

Walton said he felt the same way, mindful that the Lakers’ front office shuffling from Mitch Kupchak and Jim Buss to Johnson and Pelinka could prompt questions on whether more moves are on the horizon.

“It’s good just because with all the change that has happened,” Walton said. “You’re these young players and GM and president in and out type of thing. It’ll probably causes a little bit of worry, ‘Does this guy like me as much as the last guy type of thing?’ I think it’s good when they come down here and they talk to the guys and let the team know ‘We’re still united and we still believe in this young core we have and the future of our team.’ It’s good for them to hear that and see that they’re down here supporting them.”