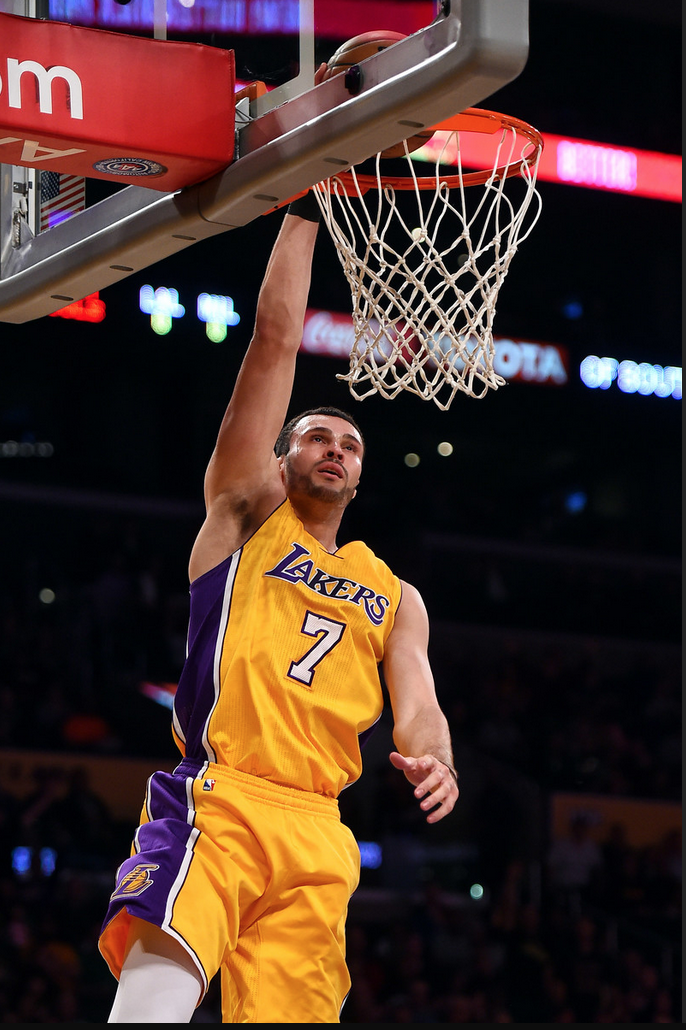 The Lakers’ Larry Nance Jr. (7) dunks the ball during their game against the Bucks at the Staples Center in Los Angeles, Friday, March 17, 2017. (Photo by Hans Gutknecht, Los Angeles Daily News/SCNG)

EL SEGUNDO — For the first time in a week, Lakers coach Luke Walton will not make changes to the starting lineup.

When the Lakers (20-50) host the Clippers (41-29) in a designated home game on Tuesday at Staples Center, Jordan Clarkson and D’Angelo Russell will start in the backcourt for the second consecutive game. Small forward Brandon Ingram, power forward Julius Randle and center Ivica Zubac will also start.

At some point before the 2016-17 season ends on April 12 in Golden State, Lakers coach Luke Walton held out the possibility he would start Larry Nance Jr. in at least one of the 12 remaining games. Walton said the pairing could be with either Zubac or Randle, something Walton said he has “been happy with both of those combinations.” But for now, Walton has put higher priority on evaluating Zubac and Randle together.

“It doesn’t really matter,” Nance said after morning shootaround on Tuesday. “As long as I play, I’m happy. It doesn’t matter if I come off the bench. I’ve gotten used to it. If it happens, it happens. If it doesn’t, it doesn’t. I’m not worried about it.”

Though the Lakers have featured 21 different starting lineups this season, Nance incidentally has yet to start a game. Of the seven Randle missed because of a hip pointer (three), attending to his expecting fiancee (two) and pneumonia (two), Walton started other forwards including Luol Deng (four), Tarik Black (two) and Thomas Robinson (one).

But Nance has maintained a valuable reserve role, averaging 6.7 points on 54.6 percent shooting and 5.3 rebounds in 21.8 minutes per game.

“Whether you come off the bench or start, it’s not about who starts the game,” Nance said. “It’s about who finishes. Who’s in the game closing important minutes. That’s what I’m looking toward in being steady. I want to be in those last 10 minutes. That’s when it counts.”