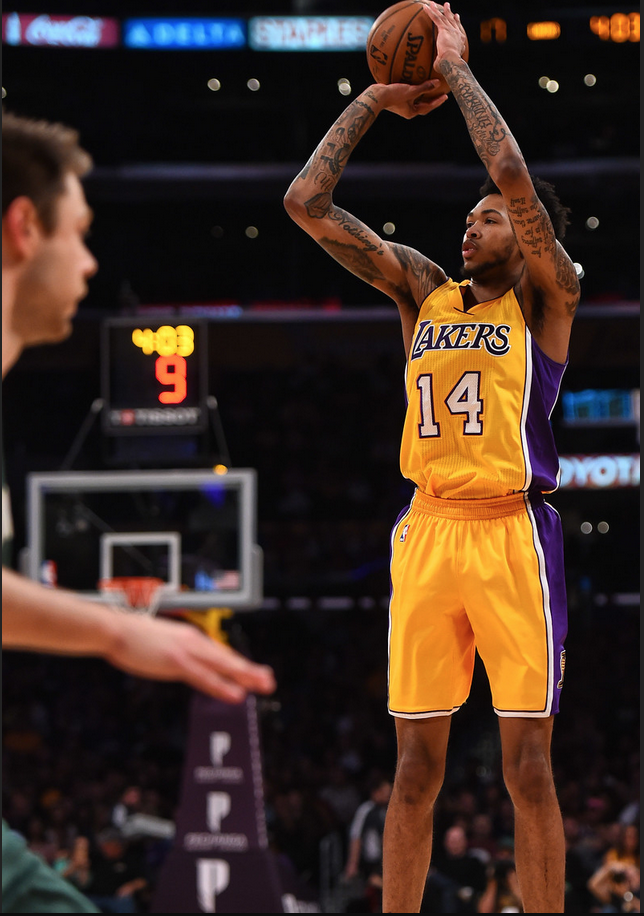 LOS ANGELES — The Lakers (21-54) will field a new starting lineup that coincides with overlapping injuries.

Lakers rookie forward Brandon Ingram will start at small forward for Saturday’s designated road game against the Clippers (46-31) at Staples Center after missing the previous three games because of tendinitis in his right knee. Lakers forward Larry Nance Jr. will make his first start of the season at center with rookie center Ivica Zubac sideined for the remainder of the season with of a high right ankle sprain.

The Lakers will put Ingram on a minutes restriction as they put more value in further developing Ingram for the remaining seven games than shutting him down.

“We were going to be careful with it. But once he felt good, he was going to get back out there,” Lakers coach Luke Walton said. “This is an important time for all of our young guys. We want him getting this experience. He’s one of those guys that is dying to play. He hates sitting out. It’s been killing him he hasn’t been able to practice and play the last couple of games. We weren’t going to shut him out longer than we needed to be.”

Walton decided on starting Nance after speaking with reporters. But he had said he planned to feature varying starting lineup combinations that would likely also include forwards Tarik Black and Thomas Robinson.

The decision to start the 6-foot-9, 230-pound Nance gives the Lakers a much smaller lineup that also features Julius Randle, Ingram, D’Angelo Russell and Jordan Clarkson. While that could give the Lakers more athleticism and floor spacing, the Lakers will have their handsful against a frontcourt that includes DeAndre Jordan and Blake Griffin. Still, Walton had suggested in recent weeks he may start Nance with Randle for development and experimentation purposes. While Nance has averaged 6.7 points on 53.3 percent shooting and 5.4 rebounds, he has mostly done so at the power forward spot.

Before his injury, Ingram had averaged 13.5 points on 51.7 percent shooting and 4.1 rebounds in 35.5 minutes through 11 games in March. Though Walton considered it significant for Ingram to close out the season, Walton views his offseason work as more significant in Ingram’s development.

“I don’t really have a hope or final goal with where he will be by the end of the season,” Walton said. “It’s more of a bigger picture of where we see him getting to. Where he finishes this season isn’t as important. It’s the offseason that is going to be much more important. He’s going to make strides in the right direction. We’re not going to overreact one way or another. If he finishes great or he struggles a little bit at the end, it will be more about what he builds toward this offseason.”

Laker podcast: Is the development and improvement really there this season?