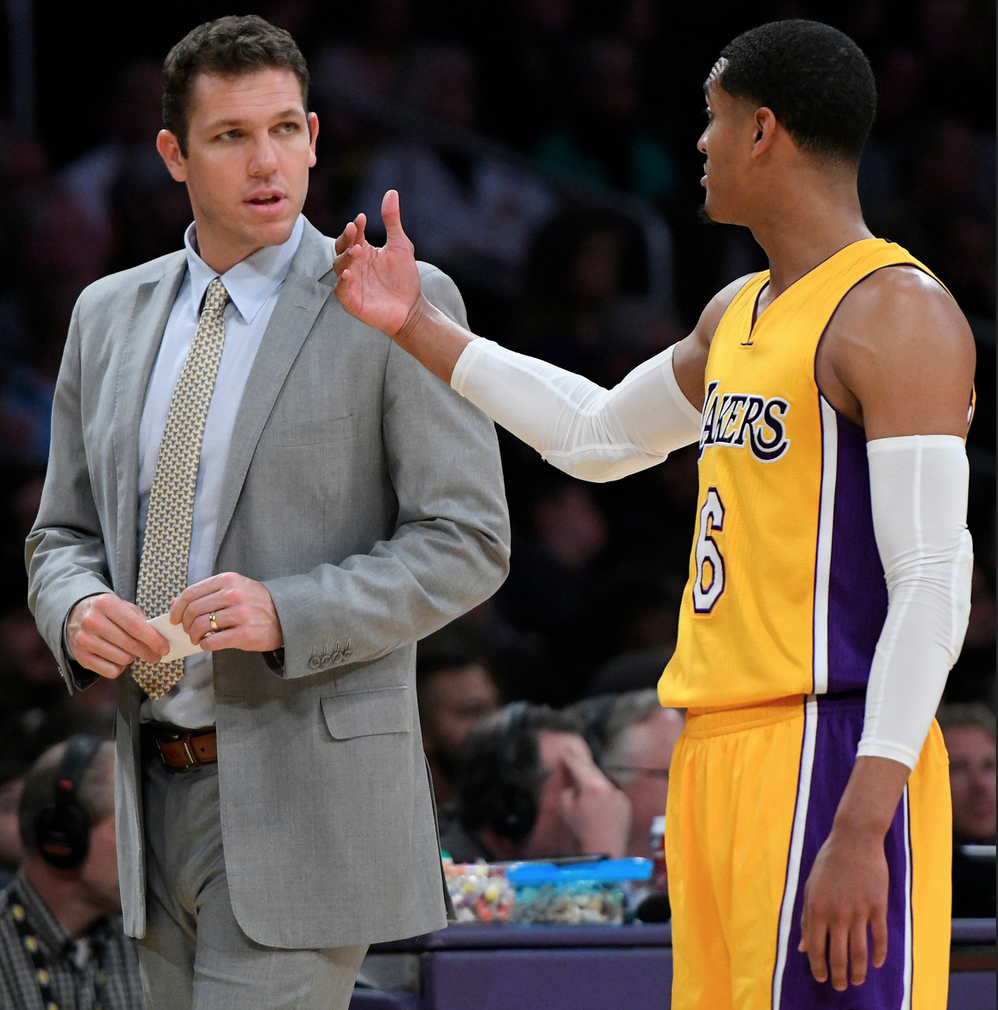 OAKLAND — The resume will never quite match what Luke Walton accomplished as the Warriors’ interim head coach. While Steve Kerr recovered from a spinal leak stemmed from offseason back surgery, Walton guided the Warriors to a 24-0 start and a 39-4 record before returning back to his assistant role.

More than a year later, Walton is about to end his first year as the Lakers’ head coach with far less of a substantial record. The Lakers (26-55) enter their season-finale against the Golden State Warriors (66-15) at the Oracle Arena with nearly the same amount of wins Walton collected to start off the 2015-16 campaign with Golden State.

Though Kerr has noticed the season has become “very trying” for Walton when they talk every couple of weeks, Kerr argued that Walton has “done an amazing job.” Kerr listed the various circumstances that made the season challenging including a young albeit unproven roster and lacking a definitive star following Kobe Bryant’s retirement. Kerr then cited the Lakers’ 10-10 start, only to spiral amid overlapping injuries and inconsistent performances.

“The start they got off to was really indicative of the joy Luke brought back to the team and to the daily routine and the energy in which they played,” Kerr said. “Then reality set in. You have to have talent in this league. Obviously, the Lakers haven’t had enough.”

The Lakers have had enough talent to secure a five-game winning streak, which Kerr saw as a “good sign.” Despite Walton shutting down veterans such as Timofey Mozgov, Luol Deng and Nick Young, Kerr also viewed the Lakers’ longest winning streak of the season as evidence that Walton is “incapable of going out there and trying to lose” for the sake of maximizing NBA draft lottery odds.

“It’s great you finish the season on a winning note. You win some games and carry it into the next year,” Kerr said. “Luke is in it for the long haul. I would imagine the Lakers front office is in it for the long haul with Luke too. They know what a special person he is and great person he is. So it’s a process. It’s going to take a while. But they made the right step this first year.”

The Lakers’ brass, ranging from governor Jeanie Buss, president of basketball operations Magic Johnson and general manager Rob Pelinka has praised Walton for numerous reasons. They like how he develops and relates to his young players. They appreciate his even-handedness. They believe Walton will have collect more wins once the Lakers assemble more talent, something he had done with the Warriors.

“He stepped into the role when I was out and crushed it,” Kerr said. “He’s a natural. I don’t know how much he’s learned about himself other than patience with having to deal with losing. One of the reasons he’s a natural is he’s so laid back and patience anyway. He’s not a guy w ho’s going to lose his cool. The fact you combine that quality with his tenacity and competitive desire, it’s a unique combination. They don’t always go hand in hand. But I think they serve a coach really well.”

That has recently played out in different ways. Walton canceled practice last week in San Antonio so he could take the players to an Air Force base, something that Kerr has done with guest speakers to break up the monotony of the NBA schedule. Walton also spent the end of Tuesday’s practice organizing an impromptu dodgeball game.

“We hadn’t done it yet. We talked about it this year,” Kerr said, smiling. “I was scared to death somebody would get hit in the eye. But it doesn’t surprise me. Luke and I agree on that philosophy of trying to keep things fresh and different and try to mix in some crazy stuff now and then.”