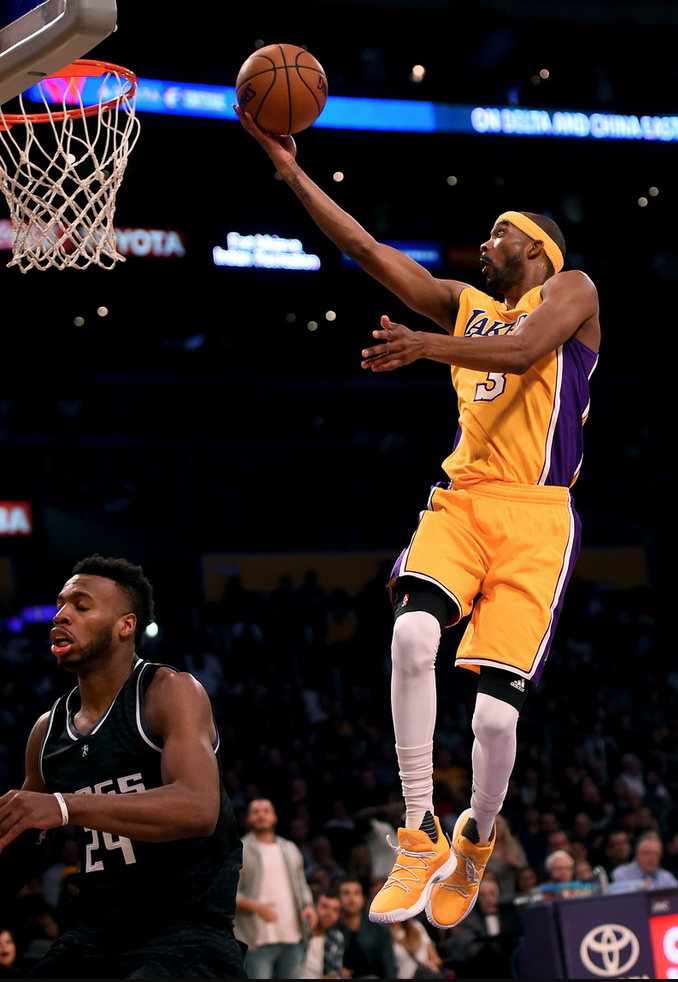 EL SEGUNDO — The smile on Corey Brewer’s face helped the Lakers feel more at ease. The endless hustle Brewer showed on the court compelled his teammates to do the same thing.

Brewer’s interaction with the Lakers’ young core did not just involve wrapping his arms around them and offering them encouraging words. Lakers coach Luke Walton also noticed the 31-year-old Brewer often calling out his younger teammates for their ‘BS.”

“I feel like I’m normal. I’m so positive. So when I do say something, I think people listen,” Brewer said with a smile following his exit meeting with the Lakers’ last week. “I don’t really say anything negative. So if I tell you something, it’s probably right. I’m never going to be yelling for no reason.”

Brewer had plenty to yell about to his teammates, though. With the Lakers (26-56) finishing with the NBA’s third-worst recorded, Brewer frequently pointed out his teammates’ mistakes.

“Young guys, a lot of times it’s more their focus and missing up assignments, which you can’t do,” Brewer said. “If you’re going to be a good team, you can’t be messing up assignments. If you watch the Spurs play, they do everything right all the time. It feels like that because they actually hold each other accountable.”

Brewer’s willingness to hold his younger teammates accountable partly explains why the Lakers acquired him from Houston as part of the Lou Williams’ trade before the Feb. 23 deadline. Though Williams led the Lakers with a team-leading 18.9 points on 44.5 percent shooting in 24.2 minutes off the bench, The Lakers willingly moved him to receive a late first-round pick and to open up more playing time for second-year guard D’Angelo Russell and third-year guard Jordan Clarkson.

Brewer then impressed the Lakers enough that president of basketball operations Magic Johnson and general manager Rob Pelinka offered specific meedback in last weeks’ exit meeting. As Brewer recalled them saying, “I played hard and helped the young guys and tried to be a good leader.”

That played out in two different ways.

First, Brewer averaged a dependable 5.4 points on 43.8 percent shooting in 14.9 minutes off the bench with endless energy. Brewer became the NBA’s new iron man as he has appeared in 227 consecutive games since Feb. 7, 2014, something the 10-year NBA veteran said it “means I take care of my stuff.” Brewer also embraced his role on a rebuilding team despite leaving a Houston team that finished with the Western Conference’s third-best record.

“I love to play basketball. Any time you have a chance to be good for me, I’m all for it,” Brewer said. “We might not be the best team next year. But if we made the playoffs, it means we made a jump. For me to come and help this team make a jump, that’s my goal for us to make the playoffs.”

Second, Brewer became an extension of Walton’s coaching style. Though Walton has drawn strong support from his players for his friendly personality, positive reinforcement and honest feedback, Walton found it helpful for Brewer to reinforce the message. Thus, it should not be surprising Brewer strongly endorsed Walton as a “great coach” for his communications skills and X’s and O’s.
Brewer’s words reflected his perspective after playing for 10 head coaches on six teams during his 10-year NBA career.

“You can’t beat them up all the time,” Brewer said of his young teammates. “They’re going to make a lot of mistakes. You got to correct them. But you also have to be positive. For me, I try to do both. I try to correct them, but in a positive way. You don’t want to get beat down all the time. Then it becomes a mental thing.”

Brewer then added, “If you have somebody who’s going to beat young players down, they go in a hole or get messed up mentally. This is good for them.”

Brewer also believes staying on the Lakers is good for him. Though Brewer remains under contract for next season at $7.6 million, he reiterated his hopes to stay given the Lakers’ quest to upgrade their roster through a possible trade.

For now, Brewer will return to his native Tennessee so he can “relax and don’t do anything.” But eventually he will resume training, something he expects the Lakers’ young core to do. After touting the growth of Brandon Ingram, D’Angelo Russell, Julius Randle, Larry Nance Jr. and Ivica Zubac, Brewer argued that offseason work will largely dictate their future success. It could also largely determine to what degree Brewer guides them with smiles over scoldings.

“They can really play. They’re just young. They’re still learning the game,” Brewer said. “They do the right things and work hard and are getting better. This summer will be a big summer for them to make a jump. Some of them have been here two or three years now, it’s time to move to the next level.”

Why Lakers view Luke Walton as a ‘players’ coach’